Home » World News » Getting to the heart of things, deep in the Otways

I was born and bred in Geelong. I feel quite proud about it, though many of my colleagues still give me that “poor you” look. Back in the ’50s Geelong didn’t appear to have much going for it, but that didn’t stop my father telling me how lucky we were to be born there.

He was on the City Council for half a lifetime and mayor from 1959 to 1961. He went to Europe a couple of times, came home, took us kids down to the foreshore, and told us there was “nothing over there” which was a patch on Corio Bay. “Toss them all together – Lake Como, French Riviera, Lake Geneva, the lot – and none of them would be a patch on the pure beauty of Geelong.” And if he could add the Cats to the package, his raptures would barely abate. 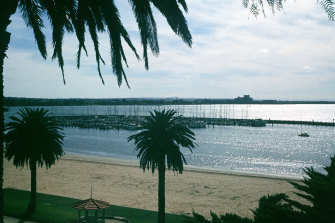 The beauty of Corio Bay was enough for my dad. Credit:Age archive

For our summer holidays, from Christmas Eve ’til the end of January, he would take us all the way down to Torquay, plonk us in our asbestos-clad holiday house, and feel that he didn’t need to go a step further. About 16 miles in the old language. Not far, but far enough. He even threw the dozen or so chooks into the boot in a hessian bag because they would have to come with us. About half of them lived to tell the story each year.

The Ford Prefect was too small to cart around the family of six, petrol was “expensive”, and in the main we didn’t want to travel with the old man as he’d puff on his pipe with the windows tightly wound up. He wouldn’t offer and we wouldn’t ask.

For 20 years Anglesea, Aireys Inlet and Lorne weren’t on our radar. Too far. Apollo Bay wasn’t even mooted. Wye River – where’s that? It was the front beach, the surf beach, Fisho’s or my mate’s backyard for the endless summer Test match, all at Torquay.

My reason for dragging up this history is to defend my total lack of local knowledge of an area that would be seen as in my ’hood. I’m talking about the Otways, the large chunk of heaven that lies about 50 kilometres from Torquay.

Of course, since those youthful days, I’ve been down the Great Ocean Road many times, I’ve holidayed at Lorne, overnighted at Wye River, wined and dined at Skene’s Creek, swum and run along many parts of the shoreline. But I’d never been into the Otways … and no, seeing Erskine Falls doesn’t count. 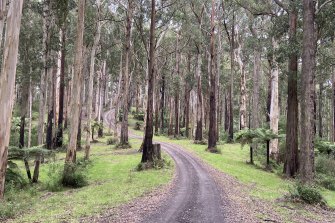 It was only recently that I finally got to see the Great Otway National Park. Like some of the best things that happen in life, it was totally unplanned and unstructured.

It started with a random phone call, followed with the classic “we must catch up!”. This time I really meant it. He was in Lorne. I was in Melbourne. The call had ended. Bugger it – no time like the present. I rang straight back and arranged for a two-night sleepover a couple of weeks later. There was no further planning needed – that’s what blokes are like.

Let’s give this friend a name. Johnny will do. Johnny had been a Geelong/Lorne boy for as long as I’d been a Geelong/Torquay boy. Although we’d grown up living in the same street, the tyranny of distance in our education and schooling meant we knew very little of each other. He excelled in sports but he wasn’t a footballer. Our paths rarely crossed, two men knowing ‘of’ but not quite ‘knowing’ each other.

I thought we’d just hang out for the day at Lorne, but Johnny had other ideas. “Let’s go to the Otways for the day. We’ll drive off along the coast and turn into the Ranges at Kennett River. By the way, have you ever seen the Redwood Forest? We’ll buy mineral water, a bit of fruit, some sausages, and take a BBQ. We’ll put a bucket of water in the boot to put the fire out. You’ll love the redwoods.”

Why am I telling you the nitty gritty stuff? Because we hardly get the opportunity to go off-script in our modern lives. Johnny had decided that we had to lose ourselves for the day in ‘his’ Otways, and see what we could discover. Redwoods?, I thought. I had seen the mighty sequoias in California … but in the Otways? Pretty far-fetched.

We lazily left Lorne and drove to Kennett. The international tour bus brigade had beaten us there, with a king parrot and cockatoo bird-feeding frenzy in full swing. We drove off left through the small crowd and instantly we were in the misty forest. There were still plenty of tourist outriders, discovering koalas in the wild within walking distance.

I told Johnny my 30-year-old koala story. It had been long buried in my memory with no reason to rise again. I had won second prize in an American Express competition where, as a reward for using your card, your name would go into the “barrel” together with $1 towards research to protect koalas from chlamydiosis, a rampant koala-killing disease that affects their eyes and/or urogenital tracts.

Second prize was a business-class trip for two around the world with Qantas, plus $5000 spending money – not small bananas in 1987. Seeing the koalas at Kennett River made me think of that time again, the importance of supporting these beautiful animals, and how easy it can be for us to forget some of the luck we have along the way. It reminded me to stay open to the possibilities of life. Johnny liked the story. 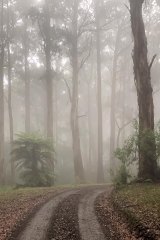 Sharp’s Track behind Lorne in the mist.

We were getting deeper into the Otways, reaching the wet, misty forests that cloak their south-facing slopes. This is the home of the mighty mountain ash and their smaller masters-at-arms, the blackwoods. At their feet, a diversity of ferns, including the ubiquitous tree ferns and the bat’s wing fern. From the driver’s seat Johnny was a wealth of knowledge, and I soaked it in.

In the meantime, we discovered tales that probably neither of us had been brave enough to tell. Ego, pride, guilt, embarrassment or the whole package. It had taken this drive to flush it all out. We were cocooned by the forest. Perhaps we were humbled amongst nature’s ancient giants. Our phone connection was limited and Googling was out of the question. We were digging deep.

Coasting down the sinuous Turton’s Track, it seemed we were at the edge of the world. I remember reading somewhere that this 12-kilometre stretch is numbered one of the five most incredible rainforest drives in Australia.

“In my childhood, my father loved to take us on ‘adventures’," Johnny told me. "One of his special places was Turton’s Track. He would turn off the engine, release the handbrake, then roll ‘Jane’, our old 1951 Plymouth, silently down the long, winding, gentle and unmade slope. The scents of the forest would jostle with the impossibly tall, straight mountain ash and with the dripping green prehistory of the Dicksonia antarctica tree ferns nipping at the open windows.”

Johnny said how wonderful it was to sense and feel the same hush and awe from me as his father must have felt from him those many years ago.

He then launched into the Aboriginal history of the Otways. Another of his favourite topics in this special place is our First Peoples and he knew all about the lyrically-named Gadubanud tribe and their five clans: the Bangura, the Guringid, the Ngalla, the Ngarowurd and the Yan Yan Gurt.

Despite their having called these forests home for centuries, they have been all but forgotten. Locally the names now used are almost exclusively those of our earlier settlers or early sailors. One name that especially galled John was that given to the Otways’ highest peak, Mount Cowley, named for an early area surveyor: “How could the name of a syphilitic drunkard grace this important landmark? What about some of the Aboriginal options?” 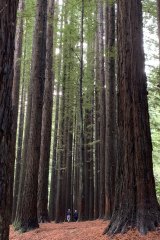 Having passed the impressive Hopetoun Falls, we had reached the Redwood Forest. Following my Californian experience, it was thrilling to find a small plantation deep in an Australian wilderness. I subsequently learned that these Sequoia sempervirens were originally planted in 1932 as a logging experiment but were never cut down.

Standing majestically at 60 metres they are still only half the height of their fellow Californians, but with the rich soils and plentiful water of the Otways it is likely that they may grow to be the tallest stand of trees in the world. Sadly I won’t be here to see that, but I suspect many will. Stretching your neck up to the sky or lying down against a tree in the soft mulch of leaves is a special and serene experience. It’s a fairytale. It is magic. Yet, it had taken me over threescore years and ten to find it.

Completing the road down to Apollo Bay and then taking the Great Ocean Road back to Lorne, Johnny had kept his promise. I had experienced a different, more humbling and tranquil Otways. I had had a far more meaningful immersion than the cursory glance most accord them from the Great Ocean Road.

To think this has been at my back door all my life. We all have to dig a little deeper.

Gareth Andrews is a writer, ex-footballer and the founder and executive director of Life Again Foundation, delivering positive mental health solutions to Australians.