'Green' power plant that gets £2m a DAY in subsidies, report shows

‘Green’ power plant that burns wood pellets instead of coal gets £2m a DAY in subsidies, energy firm’s report shows

A power station that burns wood instead of coal receives the equivalent of more than £2million a day in public subsidies, despite doubts over the environmental benefits.

The huge amount, revealed in energy firm Drax’s annual report, has been blasted as an ‘extraordinary’ payment to burn forests.

The firm received £893million in 2021 – equivalent to adding £11.60 a year to every household’s fuel bill – for burning renewable biomass pellets instead of fossil fuels.

Critics say that burning wood is not truly renewable because of the time it takes for trees to regrow, while the greenhouse gas stays in the atmosphere adding to global warming.

Last year the power station – which is Britain’s biggest carbon emitter – burnt the equivalent of around 29million trees. 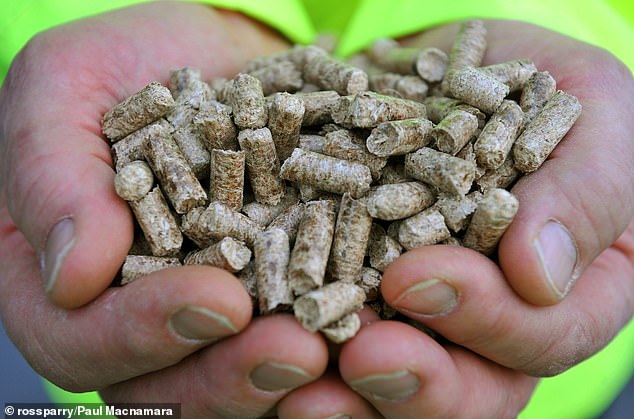 Contentious pellets: Critics say that burning wood is not truly renewable because of the time it takes for trees to regrow

Scientific opinion increasingly backs up the view that burning wood should not be classed as a renewable form of energy.

The European Academies’ Science Advisory Council (EASAC) says using woody biomass for power ‘is not effective in mitigating climate change and may even increase the risk of climate change’.

The Climate Change Committee also recommends the UK moves away from using biomass for power – and is critical that all the wood is imported, which creates further greenhouse gas emissions.

Climate thinktank Ember calculated that when this support ends in 2027, Drax will have collected more than £11billion.

Ministers are also considering offering Drax billions in further subsidies – under a new scheme known as bioenergy with carbon capture and storage (BECCS) – in pursuit of the UK’s net zero emissions goal.

Under this, emissions would be captured and stored under the North Sea.

He added: ‘The Government must ensure that in future biomass pays for its carbon emissions.’

A Drax spokesman said: ‘The renewable power produced by our power station in Yorkshire is making a vital contribution to the UK’s energy system.’