Eye do! Groom fails to notice when he hits his new bride in the face with champagne cork at wedding and then thinks it’s FUNNY

This is the incredibly awkward moment a bride was left holding back tears after being hit by a champagne cork on her wedding day.

Footage shows the groom popping open a bottle of champagne, before the cork flies off and hits his new bride straight in her eye.

The bride recoils in pain after being hit within close range, covering her face with both hands. 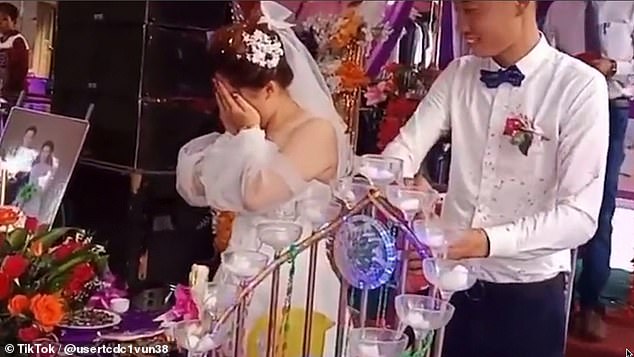 Footage shows the bride (pictured left) recoil and cover her face with both hands after being hit by the champagne cork. The groom appears to laugh after realising his mistake 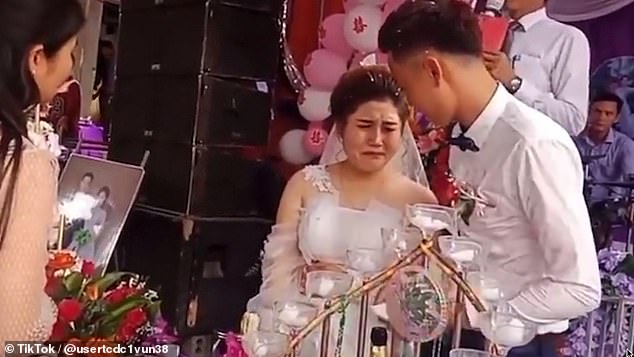 The bride tries to hold back tears after being hit within a painfully close range on her wedding day. The video was posted onto social video platform TikTok

The groom then turns towards his bride and appears confused.

After seeming to realise his mistake, the groom then laughs at the accident.

As the groom taps the bride and she keeps her face covered, one female guest rushes over to offer a tissue.

The groom takes the tissue before moving the bride’s hands away from her eyes and dabbing the area hit by the cork. 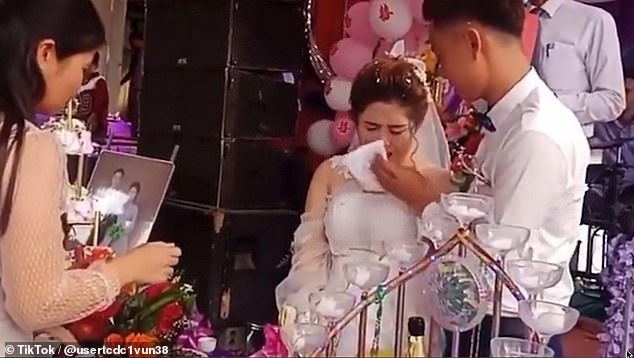 As the groom taps the bride and she keeps her face covered, one female guest rushes over to offer a tissue. The groom then dabs his new bride’s face with the tissue

The video, believed to be taken in Vietnam, was posted onto the social video platform TikTok.

Writing in Vietnamese, the user appeared to joke about whether the marriage would be ‘long lasting’ after the groom’s mistake.