Relax like a royal! Seven-bed medieval manor house in the sprawling countryside of the Wye Valley that was once owned by Henry VIII is available as holiday let for £650-a-night

A historic seven-bedroom medieval manor house once owned by King Henry VIII is now available as a holiday let.

Llanthony Secunda Manor, in the picturesque Wye Valley of Wales, dates back to the 12th century and can sleep up to 16 guests.

The home is fit for a king with seven bedrooms, five bathrooms, a spectacular dining hall and sprawling garden complete with a medieval barbecue.

The price is fit for royalty too, with Airbnb and Coolstays offering the manor for the princely sum of £650 to £1,100 per night – with a minimum two nights’ stay.

The home in the Monmouthshire town of Caldicot was one of many properties which made up the Tudor King’s property portfolio.

However the iconic ruler – who notoriously had six of his wives executed – is not known to have visited the manor, which was occupied by his Royal bailiff Clement Dace. Llanthony Secunda Manor was once owned by King Henry VII. It was seized by the king during the dissolution of the monasteries between 1536 and 1541 and is located in the Monmouthshire town of Caldicot in South Wales 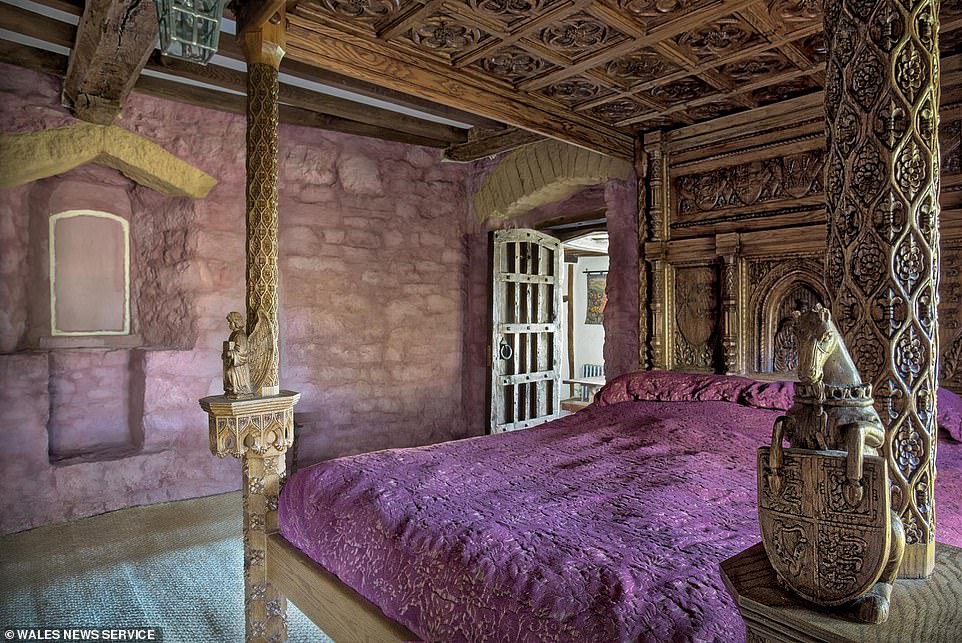 Fit for a king! Pictured is one of seven bedrooms at Llanthony Secunda Manor, South Wales, with a suitably king-size bed 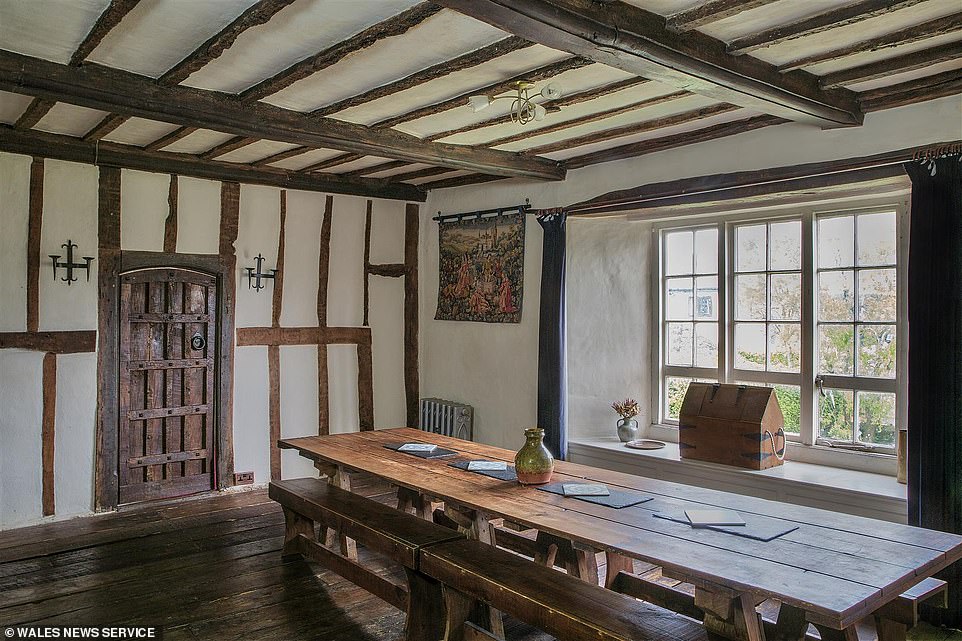 Dinner is served! The dining hall, accessible through the original 12th century door, has a large wooden table fit for a large family or dinner party 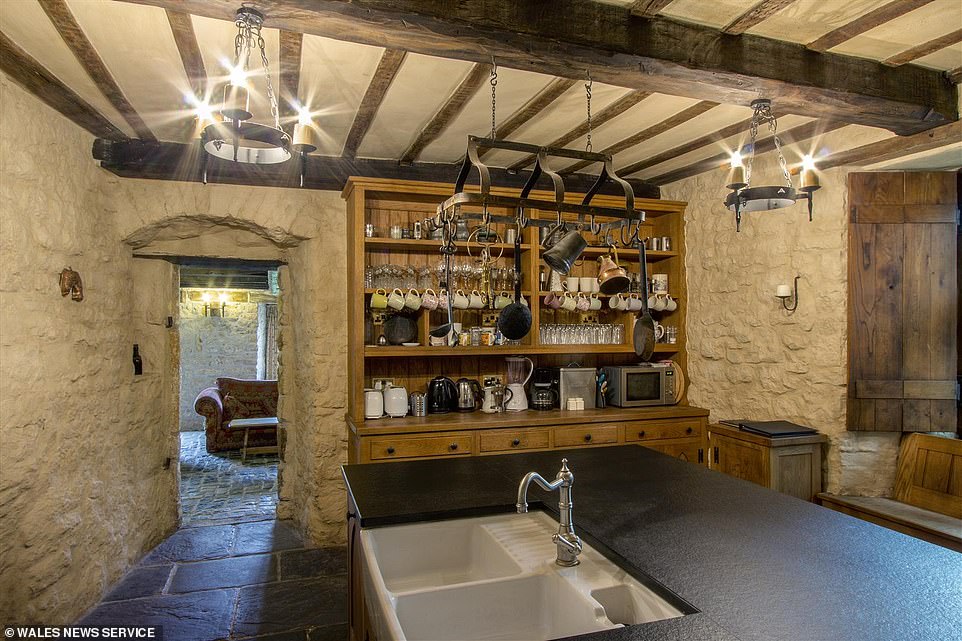 Old with the new: The kitchen is lit by stone chandeliers, which hang from Tudor wooden beams, but the worktop surfaces are brand new with modern fittings 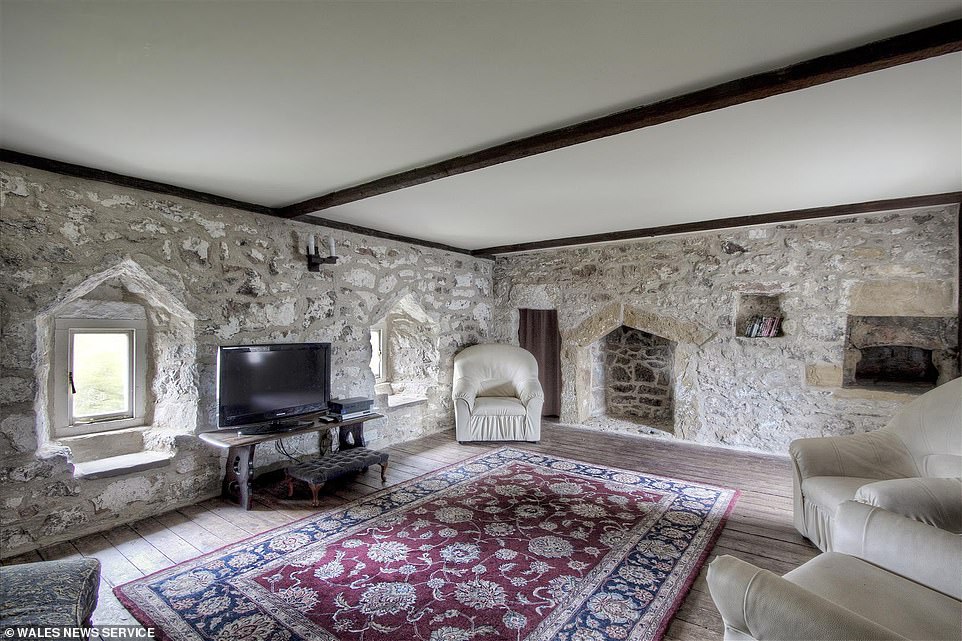 Despite its historic feel, the living room boasts a flat-screen TV and super fast wi-fi. Small windows have been carved out of stone to ensure maximum light

The Grade-II listed building had only had four private owners in its entire history – including Henry VIII – before it went on the market for £875,000.

Historians believe it would have been a base for noblemen to enjoy hunting jaunts seeking out species such as deer and wild boar.

It said: ‘The manor has 7 bedrooms and sleeps up to 16 people. We welcome weekend and short break guests please see our own webpage or enquire for rates.

‘It is the perfect location for touring both England and Wales. Llanthony Manor is located on the southern tip of the Wye-Valley, which is an area designated for its outstanding natural beauty.

‘Located in a quiet village and surrounded on three sides by a high stone makes this an amazing place to relax and enjoy life.

‘Lavishly furnished with antiques this unique opportunity to enjoy life in a medieval manor should not be missed.

‘The manor is a special place but is very much an ancient farmhouse, we welcome groups with children and pets.’ 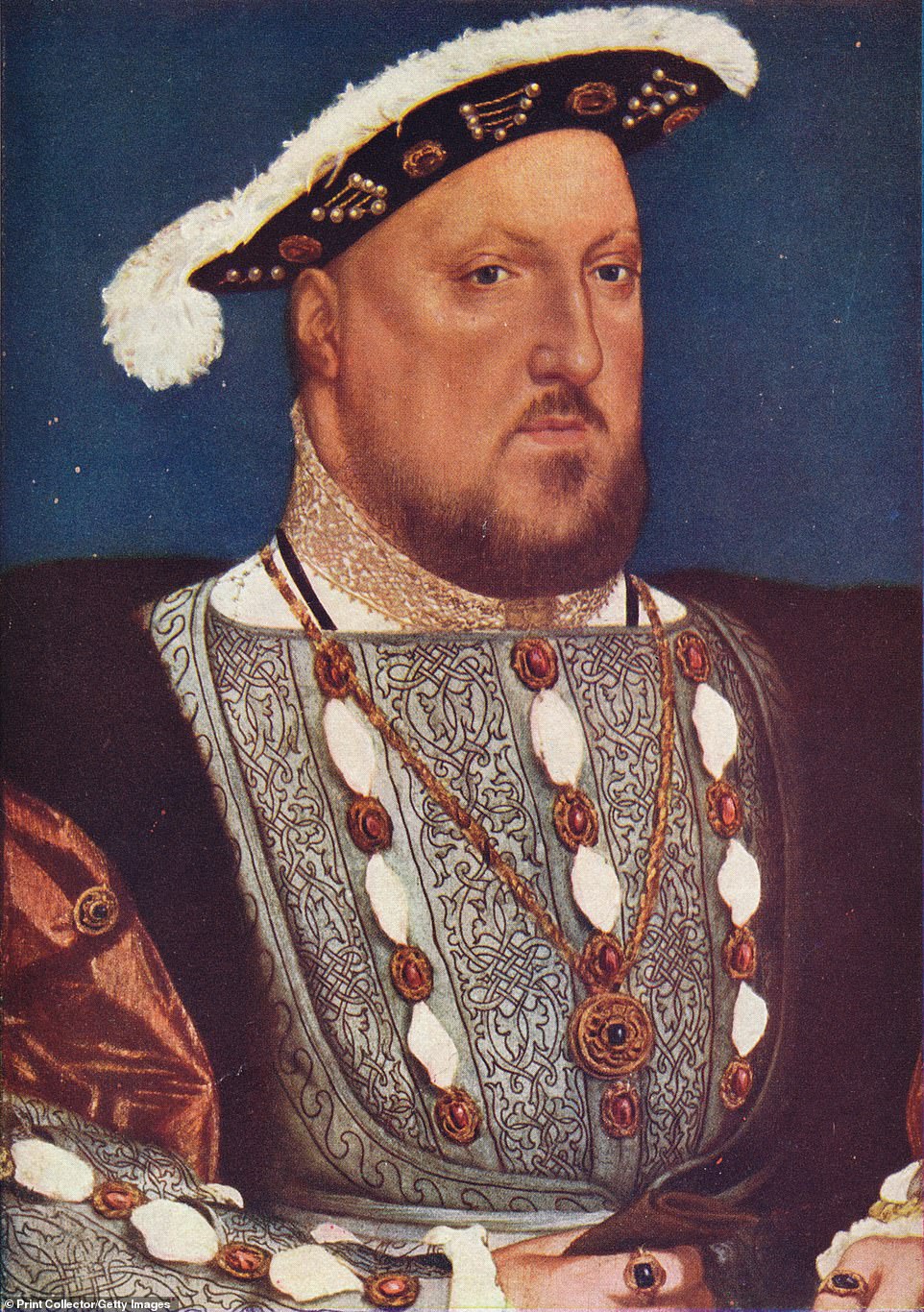 Llanthony Secunda Manor near the town of Caldicot in Monmouthshire, South Wales, was seized by the king during the dissolution of the monastries between 1536 and 1541 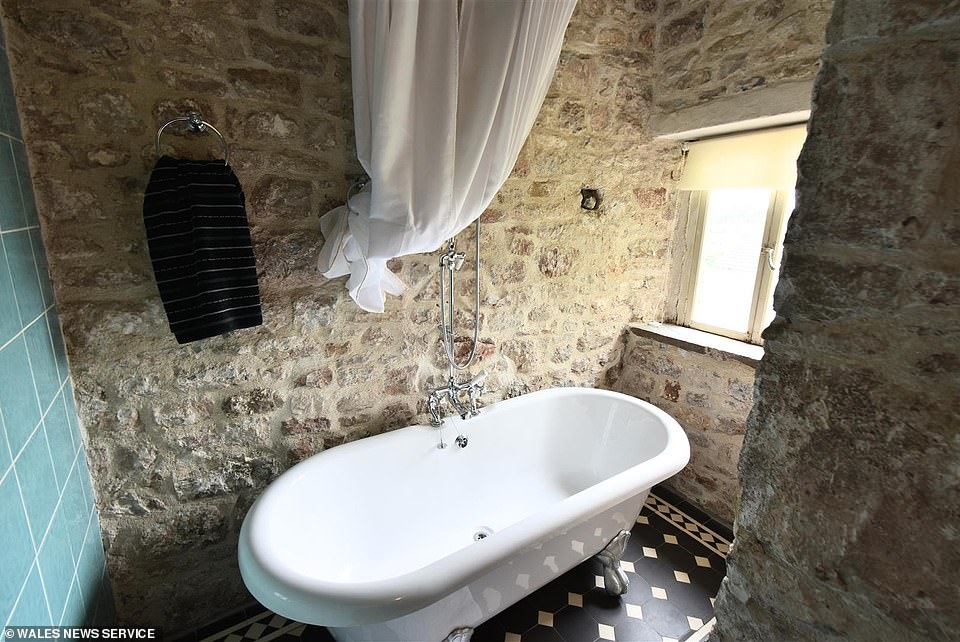 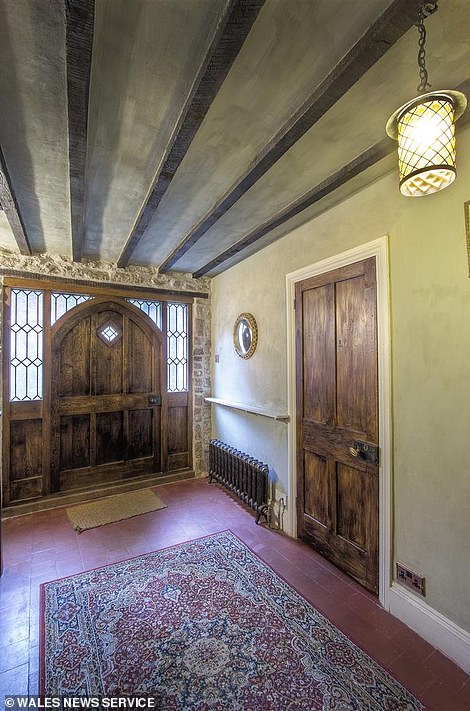 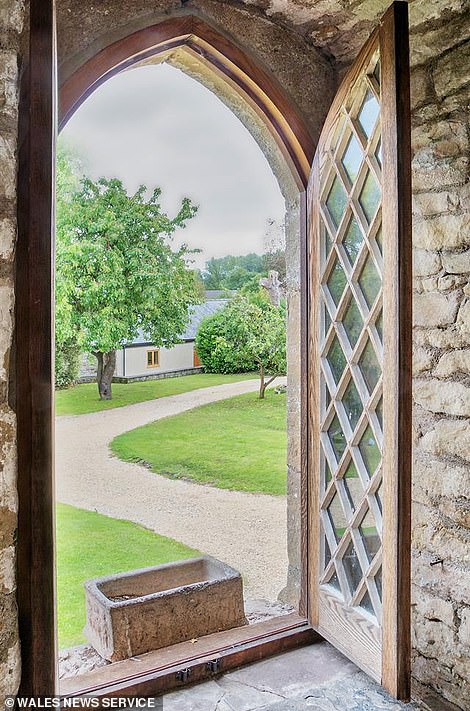 Door to the past: The arch-shaped oak doors have been restored to ensure the house maintains its Tudor feel 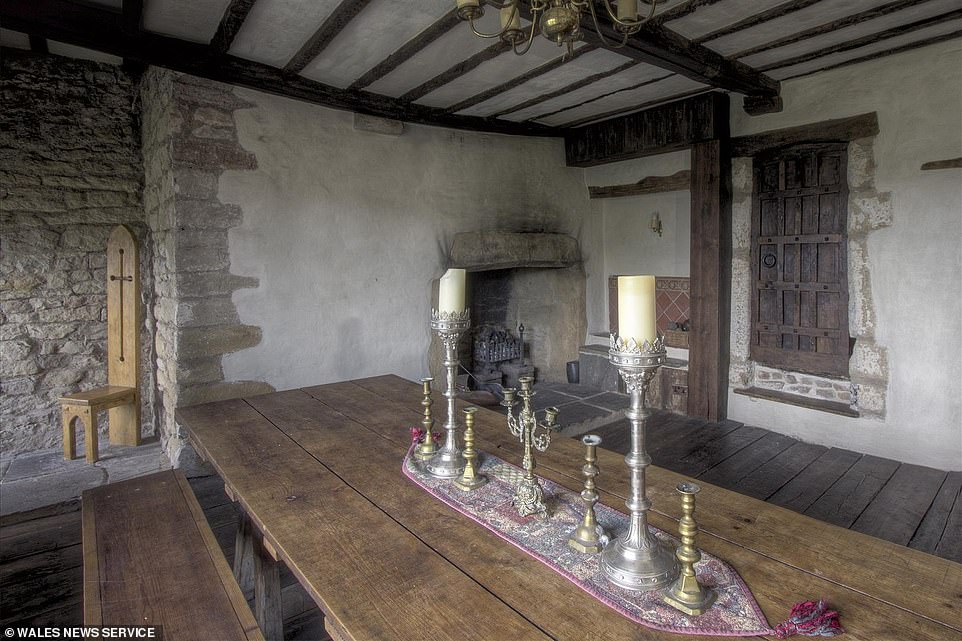 Party like it’s 1540: Not only have the Tudor-era hard furnishings been maintained, the house also comes complete with original chandeliers, candle-holders and wooden chairs 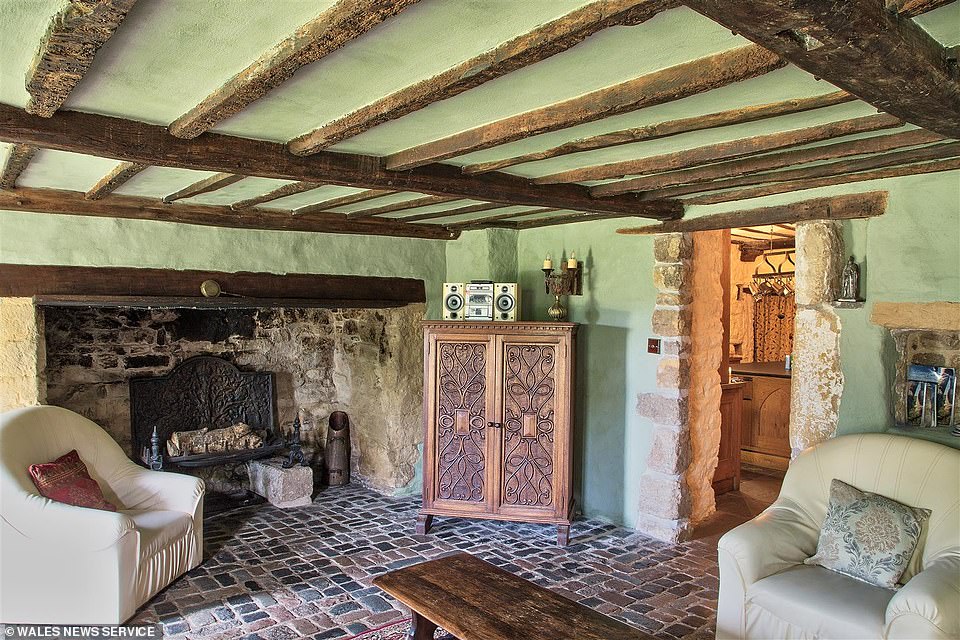 During the refurbishment of the regal 12th century property, the owner was keen to maintain the age-old wooden beams and original fire place so residents feel transported back more than 800 years 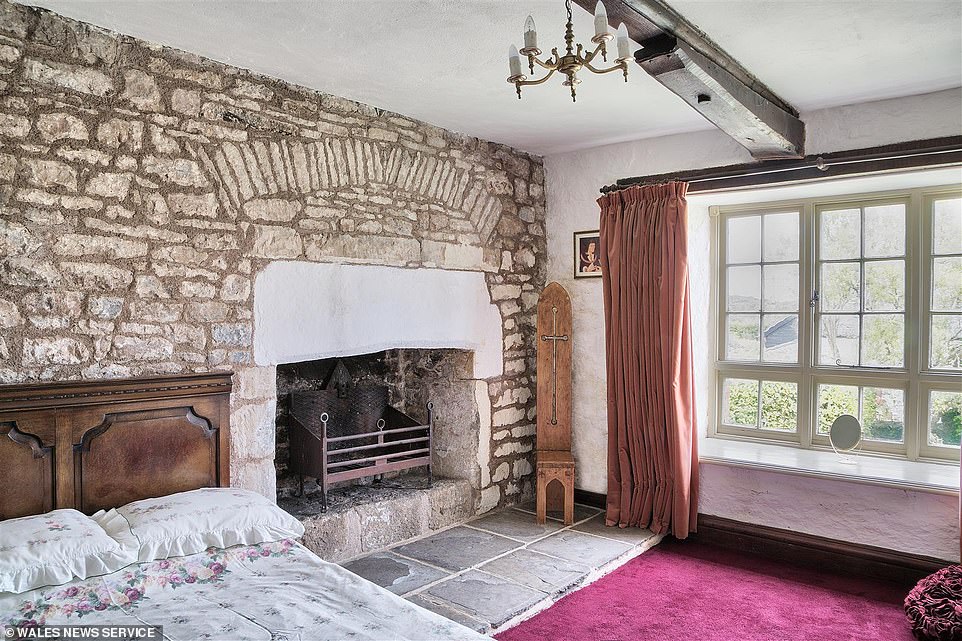 The Tudor manor house, which has been put on the market for £875,000 by owner Becky Adorjan, sleeps up to 16 adults, boasting seven bedrooms (one pictured) and five bathrooms

The property was seized by Henry VIII during the dissolution of the monasteries between 1536 and 1541.

Its ceilings are adorned with the original Tudor beams and stone chandeliers they were when the property was built in the 1100s.

Exposed brickwork and other period features are combined with modern fittings, including roll top bath tubs and sleek kitchen surfaces.

After a 30-year restoration it was rented out as a luxury holiday home before Becky Adorjan put in on the market for £875,000.