Concern over warmer temperatures and vanishing snow in some of the world’s winter playgrounds has put the selection of a host city for the 2030 Winter Olympics on hold.

The International Olympic Committee said this week it no longer plans to target host selection during its 2023 meeting. Instead the committee will give its Future Host Commission for the Olympic Winter Games more time to address its challenges.

Sports competitions around the world are increasingly affected by warmer temperatures, the Olympics included. Winter and summer venues have struggled with warmer than normal temperatures that lead to a range of issues, including lack of snow, rain instead of snow, and heat waves.

The winter host commission gave the Olympic committee’s executive board a presentation Tuesday, prompting a “wider discussion on climate change” and sustainable winter sport. One proposal floated would require future Winter Olympic hosts to prove their average minimum temperatures in February over 10 years were below freezing at potential snow competition venues.

The revised schedule will allow the committee to “respond swiftly and effectively to ever-changing global circumstances, for the benefit of the athletes, all Olympic Games participants and the whole sports movement,” said commission chairman Octavian Morariu, Rugby Europe president.

In the months ahead, the committee plans to consult with international federations, athletes and winter sports industry experts.

What to know about climate change: What is global warming? Definitions explained.

Stay up to date on climate news: Subscribe to Climate Point newsletter today

Two consecutive Winter Games could be announced at once

The government of British Columbia recently opted not to support the Vancouver bid, but Canada’s Olympic and Paralympic committees have urged the province’s government to reconsider.

It’s possible the committee could announce the awards for both the 2030 and 2034 games at once “to create stability for winter sports,” the IOC stated Tuesday. The commission also is considering rotating the winter games within a pool of hosts.

The 2026 Winter Games are scheduled to take place in Milan and Cortina d’Ampezzo, Italy.

How climate change is impacting the winter Olympics

Climate change has many impacts. Some more obvious than others, said Marshall Shepherd, an international expert on weather and climate at the University of Georgia. “Some studies have shown that in the coming years only a handful of places will meet thresholds needed for Winter Olympic sports,” he said.

The committee referred to that academic research this week, saying it showed “a potential reduction in the number of climate-reliable hosts.”

In one study this year, a group of researchers in Canada, Austria and the United States examined conditions at all of the 21 communities that previously hosted Winter Games. They found the average February daytime temperatures had increased more than 10 degrees from games held in the first half of the 1900s.

Without dramatic reductions in greenhouse gas emissions, the group concluded, only one of the 21 previous locations — Sapporo — would be able to provide reliably fair and safe conditions for snow sports by the end of the century.

Another study found unfair and unsafe conditions had increased over the last 50 years at all of the past Olympic Winter Games sites. The probability of worsening conditions increases under all future climate scenarios, according to the study led by Daniel Scott in the geography and environmental management department at the University of Waterloo in Canada.

In April, several Olympians traveled to Washington, D.C., to talk to legislators about how climate change threatens their sports. The trip was organized by the nonprofit Protect Our Winters, which organizes athletes and sports enthusiasts around climate change issues.

Concerns over rising temperatures extend across the winter sports community.

This winter has been tough for the International Ski and Snowboard Federation’s World Cup events in Austria and Italy:

The International University Sports Federation also has acknowledged the challenges. It is meeting in January concurrently with its Winter World University Games in Lake Placid, New York. The theme is “Save Winter – the intersection of climate change and winter sports.”

“Everyone who lives, plays and works in a winter community knows that our climate is warming and we’re going to lose winter if we don’t do something,” said Ashley Walden, executive director of the Adirondack Sports Council, the organizing committee.

Artificial snow has taken an increasingly larger role in the Olympics as the climate warms, but the degree to which the events use manmade snow has been controversial.

Artificial snow made headlines in 2018 during the games in Pyeongchang, South Korea.

Many winter athletes have voiced concern that crashes are becoming more common on courses designed for real snow, not for the frozen water droplets that are used instead. Athletes say the icy surface is firmer and faster and harder when they fall. 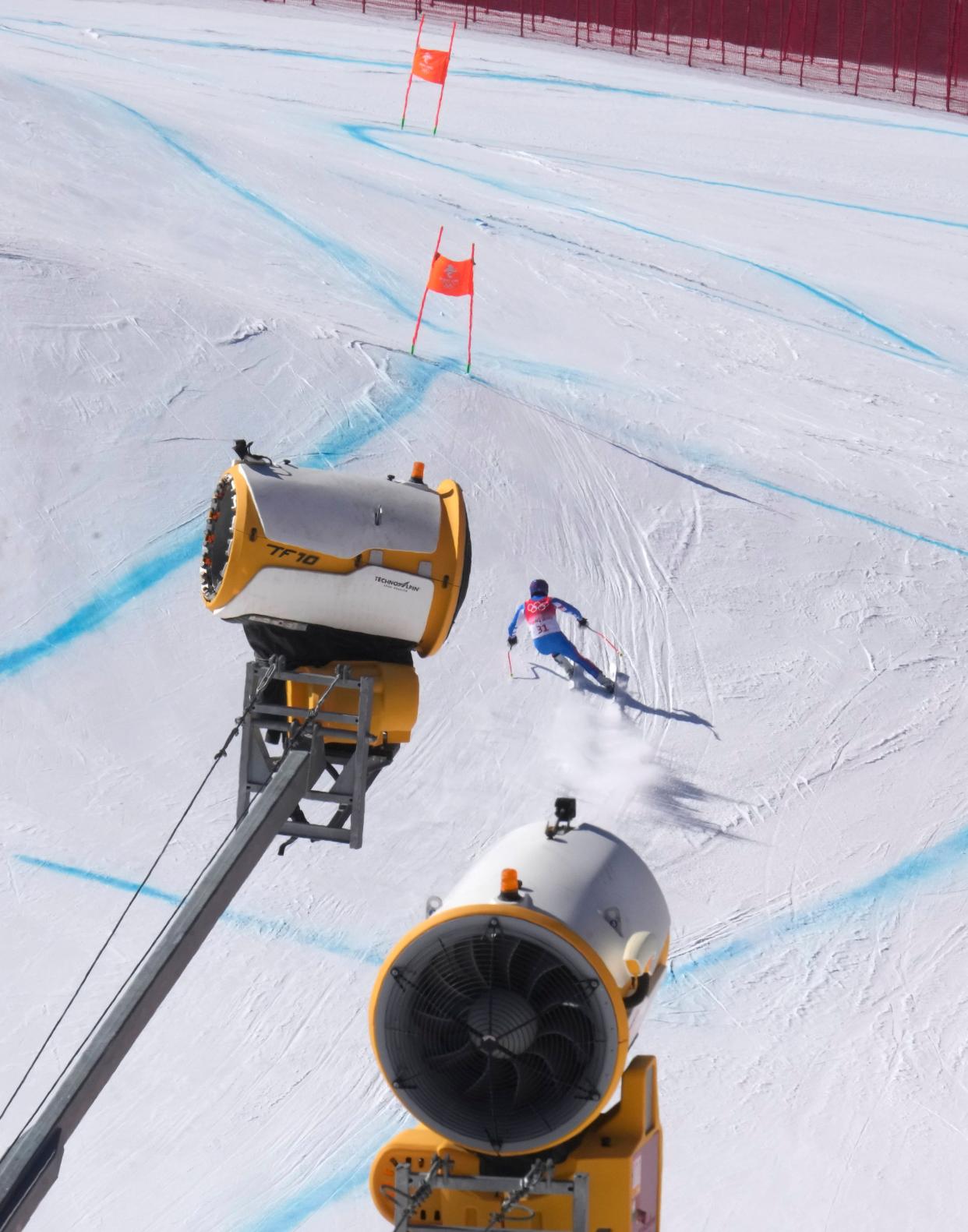 In Beijing, the Olympic committee said only about 10% of the snow used at the Guyangshu Cluster event in Zhangjiakou was natural. The committee refuted concerns about the manmade snow, saying artificial snow has been widely used at sports competitions and ski resorts for years to guarantee the quality and consistency of a course.

How soaring heat is affecting the Summer Olympics

Scholars also have raised concerns about the health of athletes as temperatures soar for the Summer Games. Before the Tokyo games in 2021, a study by university researchers in the United Kingdom, titled “Rings of Fire,” found Tokyo temperatures had risen more than three times as fast as the world’s average since 1900. The study also suggested the Olympics incorporate climate data into venue selection criteria.

Study author Mike Tipton, a professor at the University of Portsmouth in England, stated: “Olympic organizers must take the warnings in this report seriously or face a real risk of competitors collapsing through heat exhaustion.”

When the Games arrived in Tokyo, Russian archer Svetlana Gomboeva collapsed from heat stroke during qualifying, golfers competed under a triple-digit heat index, and the triathlon was moved up to prevent heat exhaustion among the competitors.

Who is hosting the 2024 Olympic Games? Paris and its landmarks are ready to take center stage.

Dinah Voyles Pulver covers climate and environmental issues for USA TODAY. She can be reached at [email protected] or at @dinahvp on Twitter.