The man on the skateboard is searching for trouble and he knows where to find it. He is one of those COVID-19 protesters looking for police to film him breaching lockdown rules – and he chooses Victoria’s Parliament House as his stage.

The police look a little jaded as they ask his name and address. The man’s voice is brittle with anger and fuelled with a self-perpetuating sense of outrage. He clearly thinks he has been wronged and is the victim. 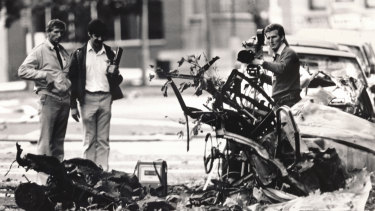 The car bomb that ripped through the police headquarters in Russell Street on March 27, 1986.

Eventually he tells them if they want to know his background they should contact Inspector Steve Cooper from the fixated threat assessment centre. This is a red flag to the police. They know he is a person of interest to the people who try and stop a small number of the troubled turning from angry to violent.

As they usher him from the road and he continues to berate them as “terrorists”, a uniformed cop steps forward with a friendly tone and addresses him by his first name.

“Do you remember me?”

The angry man’s attitude changes in a moment. He recognises the policeman as someone who treated him well when he was under arrest at a suburban station.

“Ask Chris, he’ll tell you I’m a good guy,” he says. That cop, at least, is no longer an oppressor but someone who can help.

Every suburb and every country town has them. The regular offenders who need friendly care and psychological treatment rather than stern words and a locked cell. Often this is managed case by case by individual police without a detailed game plan. Most times they battle through, sometimes they don’t, occasionally with disastrous consequences.

The 1986 Russell Street bombing was a case of offenders with a pathological hatred of police, Family Court judges have been targeted and international terrorist groups use the internet to groom recruits who want to be heard.

Three years ago police established the Victorian fixated threat assessment centre as an early warning system – an elite group designed to find and stop potential lone attackers before they strike.

It has quietly proven to be much more – it doesn’t make headlines because its job is to stop the sort of events that do. Terrorism, it turns out, is not the main threat and a strong law enforcement response can have dangerous consequences.

According to Cooper, the centre “prevents incidents by early identification of clients to disrupt the pathway that may lead them to harm others or themselves”.

There are two types of “client” – the first is fixated, blaming an individual – usually someone in public office, such as a politician or judge – for their problems. The second carries a pathological grievance, where an institution such as police, courts or a company need to be punished.

In many cases the individual has a point. It could be as small as a parking ticket or as big as a work dismissal, but the individual feels they have been wronged and denied justice.

There is a moment when life derails. Something goes wrong, the obsessive fight to right the wrong leads to a drop in work performance, a demotion or dismissal, family issues and loss of friends. Instead of blaming the behaviour, the person blames the initial problem.

The symptom, not the cause

Since March 2018, the centre has examined 599 referrals (usually from medical staff, police and family) and has taken on 164 cases. At any one time it is dealing with about 50 individual cases, each with its own dedicated detective, mental health expert and analyst. 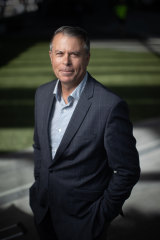 The common complaint of street police is they cannot get mental health experts to a scene quickly enough to make a difference and because of the need for medical confidentiality, they may have to deal with a troubled offender without understanding their background.

Information is shared at the centre, while making sure confidential medical details are not widely accessible. “We have a prescribed sharing protocol and no health information is held on the police database,” says a senior clinical psychologist with the unit.

Cooper says terrorism is not the cause but the symptom and often the troubled individual is attracted to a cause in which a conspiracy involving governments and institutions can be blamed. Many of our terror suspects have underlying mental illness and have embraced radical and violent propaganda as “the answer”.

The worry is how quickly the desperate can be radicalised, which makes the unit a vital first line of defence. It uses modern methods to follow the oldest rule in policing: it is better to stop a crime than solve one.

“Often when they have complained they have been told to go away and that the problem doesn’t exist. When we get involved it may be the first time they feel they have had someone listen,” says Cooper.

“The people here have to show empathy and not want to lock everyone up.”

Cooper says most cases require treatment rather than a traditional police response.

Not all the cases sent to the centre end up with it. In most instances advice is given to the local police on how to handle the repeat, irrational offender.

Those who end up there might be leading desperately lonely lives, often self-imprisoned in boarded-up houses believing they are the victims of monstrous conspiracies.

The fixated threat assessment centre tries to reintegrate its clients into society “before they harm themselves or others”.

Frank*, 43, alleges he was assaulted by police several years earlier during an arrest. His claims were denied by the officers involved and, in the absence of corroborating evidence, the case was dismissed.

Frank is a prodigious letter writer and for years sent letters of complaint to the “offending” police station demanding compensation and an apology. With every rejection he became angrier, shifting his attention to a state cabinet minister.

When the minister couldn’t help he became part of the conspiracy and was branded as corrupt as the rest of them. Frank stopped getting mental treatment, withdrew from his few remaining associates and his letters went from angry to menacing.

When the centre became involved they encouraged him back to mental health treatment, helped him get legal aid at the Family Court and linked him to a community policing unit that saw him as a client rather than a troublesome crook. The aim was to release the overwhelming pressure Frank felt was destroying his life.

Finally, he felt someone was listening and his fixation on the minister lapsed.

From Queensland with rage

The man with the Queensland drawl was anything but laconic. Having moved to country Victoria, Ian* engineered confrontations with local police and claimed to want to commit “suicide by cop”.

His file at the centre states: “The referred person shows evidence of extreme grievance, hatred, bias, perceived injustice and/or resentment which is highly personalised or idiosyncratic, rather than a widely shared ideology.”

In other words, he hates cops and doesn’t know why.

In Queensland, he was obsessed with an ex-partner and when charged with stalking his obsession turned to the police. Moving to Victoria for a new start, he took his hatred with him. At first police thought he was just a knucklehead, the sort who had to have the last word and was never wrong.

But his behaviour became increasingly erratic and worrying.

Police in the main street of the local town were speaking to three suspects when they noticed a man sitting in a car across the road taking notes. When approached he said: “I like writing down registration numbers of unmarked police vehicles, so I know who is up my arse trying to pull me over.”

He refused to move on and followed them across the road, continuing to verbally abuse them. He followed them back to the police station, asking them to roll down their window while demanding their names and ranks.

When he drove off he was intercepted, gave his Queensland driver’s licence and said he “hated” plain clothes and undercover police and felt the use of unmarked cars was “unfair”.

While reporting for bail in Victoria over Queensland offences, he became agitated and started ranting that if he killed the magistrate who had granted an order against him “he would be taken seriously”.

He said Queensland police “were trying to take my life away” and if “I drive through a police station I’d get some attention”. He then started to show a concerning interest in the female police involved in his case, repeatedly ringing the station to try and talk to one.

When the unit took the case, they made sure Ian received mental health treatment, notified Queensland Police of the threat to the magistrate, offered to take out protection orders, checked Ian had no access to firearms, set up an older male police officer as his case manager, consolidated court dates to lower his stress and anger levels and tried to break down his pathological hatreds.

They put danger flags on his file so any police who deal with him know he has the capacity to become aggressive.

They used the carrot-and-stick approach, telling him they would do all they could to help him if he behaved but warning him there was a dirty big stick they could use if he continued down his present path.

Sometimes all the love in the world is not enough.