There are many eternal mysteries in life: Why do so many fruits taste better when they’re sliced thinly? Why are low-rise jeans coming back into fashion? And why are cyclists so intense?

Normally, these are not questions one would expect an answer to. But I think I might have one of the answers to the cyclist thing, and all I had to do was become one of them. 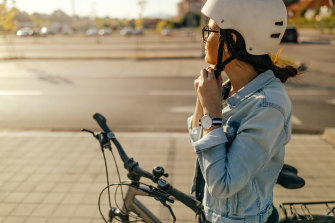 Why are cyclists so intense? To answer this question, I had to become one.Credit:iStock

See, the thing with cycling is that it is very dangerous. You’re very lucky to come across a fully separated bike lane (thankfully the Melbourne City Council has been working on this in the CBD and surrounds, and other councils would do well to take a leaf out of their book), and the vast majority of roads are set up as though cars are the only form of transport instead of just one of them. Even the bike paths, such as the one along the Yarra in the city, are shared with pedestrians, which doesn’t seem entirely safe for cyclists or walkers as I attempt to overtake families who are competing to see who can stretch their arms the widest while holding hands.

The road thing is just part of what makes cycling so dangerous. Our squidgy human bodies are ridiculously fragile. (How’s your lower back today?) And yet cyclists hurtle themselves down asphalt roads and gravel tracks at speeds of 20-plus km/h. It’s exhilarating, fun, great exercise, and deeply stupid. It’s why I enjoy it so much.

But all that risk means you need to really love it to justify it. So you get the outfit and the fancy bike where you don’t understand all the fancy bits (what the hell is a carbon fork, anyway?) and talk about how much you love it all the time to cover the fear (also because of the adrenaline and genuine love).

We think of cycling as a leisure activity, but the grim truth is that 13 cyclists were killed on Victorian roads last year, up from 11 in 2019. To try to reduce the risk, with the odds stacked against them, many cyclists find themselves becoming activists for our healthy, emissions-free mode of transport. 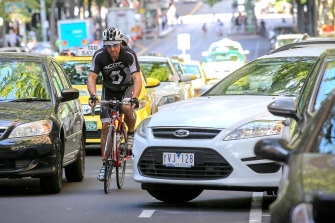 All that risk means you need to really love cycling to justify it.Credit:Wayne Taylor

There have been decades of ridiculous car-centric government delusions that maybe congestion can be solved if they build just one more lane, one more highway, instead of addressing the root of the problem. That in turn fans the entitlement of motorists that they are the One True Road User and thus don’t need to worry about cyclists’ squidgy bodies, because anything they do to us is our fault for existing and inconveniencing them.

The Minimum Passing Law which came into effect in April, is a good start (even if I haven’t seen it enforced yet, and many drivers seem unaware of it). But every day cyclists still have to fight to be able to travel safely on roads that are supposed to be just as much theirs as anyone else’s.

If someone needs to defend themselves, or campaign to do something that’s important to them often enough, then of course it’s eventually going to become a key pillar of their identity, at least for a little while.

That’s why you get the outfits to more easily recognise each other, and bring up in every conversation how drivers need to look out for cyclists in the inside lane when they turn left. Often the more society ostracises a group for certain activities, the stronger that group becomes as a unit, and the more vocal they need to become.

This doesn’t excuse those weird, gatekeeping Lycra-bros who act like you can’t be a real cyclist if you haven’t been in the Tour de France (despite never competing themselves), yet only ride to their local cafe to sit around in their tightest Lycra. But it does explain why I went from being a normal person who just wanted a practical way to go to work, to someone who mentions bikes in every conversation.

Alice Clarke is an award-winning freelance journalist, producer and presenter.