How the Saharan heatwave turned the UK into desert, as swathes of the South and East of England see less than 1mm of rain so far this month

After rivalling temperatures in the Sahara last week, parts of Britain are now drier than the African desert.

Swathes of the South and East of England have had less than 1mm of rain so far this month, according to Met Office data.

By contrast, figures provided by The Weather Company, a leading forecasting business owned by IBM, show that Laghouat, an Algerian town on the northern edge of the Sahara, has had 5mm of rain this month. 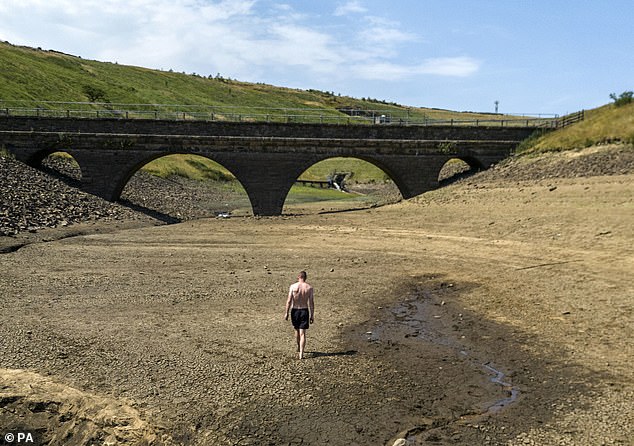 A man walks through a dry bank of a tributary to the Dowry Reservoir near Oldham. Some parts of the South and East of England have had less than 1mm of rain all month

With predictions that July may be the driest in the UK for 256 years, some eastern areas are on the verge of being classified as desert.

England has experienced a lack of green grass since the heatwave. In London, pictures of Wimbledon Common, Hyde Park and Green Park show parched, yellow grass ater a lack of rain.

One Londoner who visited Hackney Marshes tweeted: ‘Well, that was a somewhat warm cycle home. As I crossed the Hackney Marshes I thought I was back in Australia. Never seen the grass so yellow.’

Computer forecasts suggest only 1mm of rain will fall in the east of the country during the rest of July, and between 2mm to 8mm in most other parts.

It means this month could beat the 8mm record for the driest July measured across England and Wales set in 1825. The Met Office’s records date back to 1766.

London was recorded as hotter than the Western Sahara and the Caribbean last Monday. East Anglia is on track for under 500mm of rain over the 12 months since August last year, meaning it would be classified as a semi-arid desert.

London Fire Brigade says it tackled more than 800 grass and open-land fires since the start of June up until July 12.

And ‘exceptional’ fire risks are forecast today in Essex, with ‘very high’ risks in the South-East, East Anglia and parts of the Midlands.

The Met Office says Britain faces drought, with parts of the South and East already in ‘absolute drought,’ defined as 15 days with no rain. The Environment Agency says one in three rivers are ‘exceptionally low’ and some reservoirs half-empty. There is a growing likelihood of hosepipe bans, and harvests are also expected to be hit.

Brian Gaze, a forecaster with The Weather Outlook, said: ‘It’s remarkable that parts of Britain have had less rain than the Sahara during July. The ground is bone dry, and very little rainfall is forecast into the first weeks of August.’ 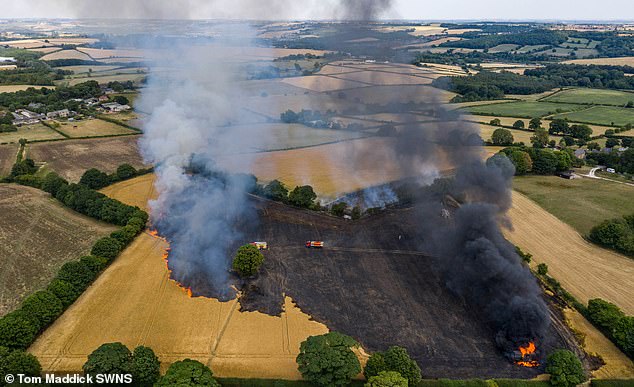 Fire crews fight grass and field fires near Chesterfield in Derbyshire on July 19 as temperatures hit record levels across Britain. A large number of fires broke out amid the dry and hot conditions 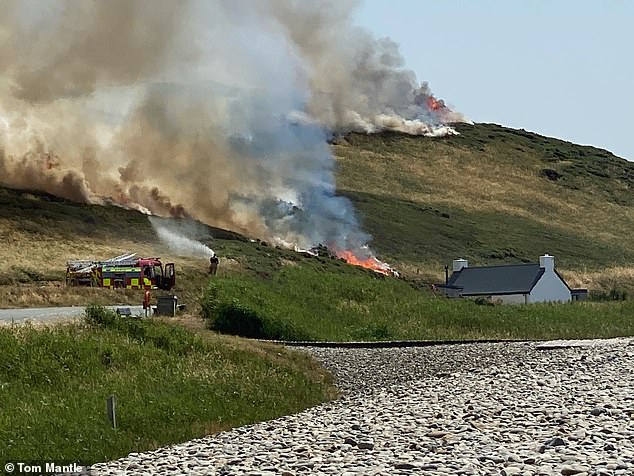 A grass fire in Newgale, Pembrokeshire, as firefighters work to keep it under control in 40 degree heat

Met Office chief executive Penny Endersby said: ‘Our attention is turning to drought and when we might see any rain – and we’re not seeing any significant rain coming up.’

Averaged across England and Wales, just 5mm of rain has fallen so far this month, Met Office figures show, and more warm weather is expected as the summer holiday season begins.

While lower than last week’s heatwave, which spiked at 40.3 degrees Celsius in Coningsby, Lincolnshire, the UK will see highs of 28C in the coming days. Meteorologists say there is a good chance of more very hot spells in August.

Meanwhile the water firms Southern Water and Dwr Cymru have warned of hosepipe bans within weeks and Kelly Hewson-Fisher, from the National Farmers’ Union, pleaded with the public to take care not to accidentally start fires.

‘The risk of fire is still extremely high,’ she said. ‘A dropped match or smouldering barbecue is all that is needed to start a serious blaze.’