Britain yesterday mocked ‘the poor performance’ of Russia’s armed forces in Ukraine, blaming the country’s top brass for their ineptitude and lack of discipline.

A daily intelligence report by the Ministry of Defence said Moscow had lost a large number of battle tanks because they were not equipped with explosive reactive armour technology – or ERA.

‘Used correctly, ERA degrades the effectiveness of incoming projectiles before they hit the tank,’ the report said.

‘This suggests that Russian forces have not rectified a culture of poor ERA use, which dates back to the First Chechen War in 1994.’

The report added: ‘It is highly likely that many Russian tank crews lack the training to maintain ERA, leading to either poor fitting of the explosive elements, or it being left off entirely.’ 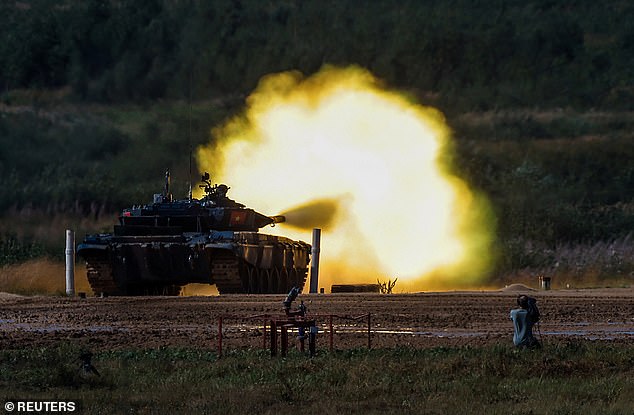 British officials said ‘the war has seen numerous failures by Russian commanders to enforce low-level battle discipline’, adding: ‘The effect of these failures is likely a significant factor behind the poor performance of Russia’s forces.’

Data released by Ukraine’s military said their troops have killed more than 44,000 Russian soldiers and destroyed some 1,800 tanks.

The UK has given Ukraine almost 7,000 anti-tank missiles since Vladimir Putin’s troops invaded the country in February.

Ukrainian military intelligence officials said yesterday that Russia has been forced to pull back 24 fighter planes and 14 attack helicopters from occupied Crimea after strikes on airfields in Saki and Gvardiyske. The retreat has seen the aircraft moved deeper into the annexed Black Sea peninsula, or to Russia itself.