Motorists face growing disruption as traffic restrictions are imposed on a rising number of crumbling bridges.

Research published today by the RAC Foundation shows that many council-owned bridges are subject to weight limits due to structural weaknesses.

The study found 3,211 bridges in England, Scotland and Wales had become so weak they have been categorised as ‘substandard’, up from 3,105 the year before and 3,055 two years ago.

It is estimated that bringing them all back to perfect condition would cost £1.16billion.

Town halls reported that 17 bridges – 12 in Dorset and five in Denbighshire – collapsed completely during the previous 12 months, with 37 suffering partial collapse.

Devon was the county which reported the most substandard bridges (229), followed by Oxfordshire (222) and Essex (167).

The foundation fears cuts to council maintenance allowances could further exacerbate the problem. 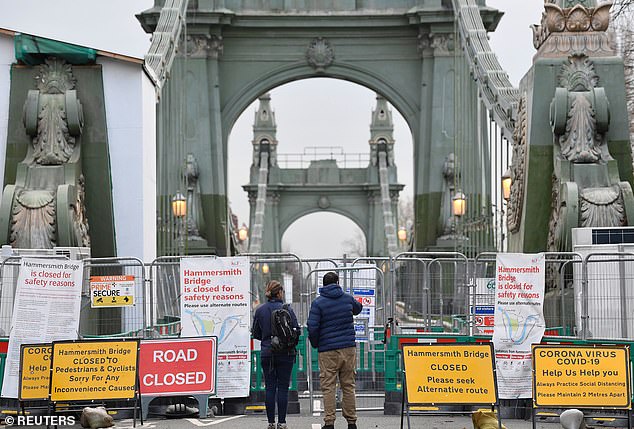 In percentage terms Hammersmith and Fulham in west London had the most (50 per cent) of any town hall. The study found two of its four bridges were substandard.

These included Hammersmith Bridge, which has been closed to vehicles since August 2020. The 136-year-old, Grade-II listed bridge – one of the world’s oldest mechanical suspension bridges – only re-opened to pedestrians and cyclists last July.

Earlier this week ministers pledged another £2.9 million towards fixing the bridge to keep it open for walkers and cyclists.

It is unclear when it can re-open to vehicles.

After Hammersmith and Fulham came Hartlepool (46 per cent, 16 of 35 bridges were substandard) followed by Kingston upon Thames (36 per cent, four of 11 bridges).

Traffic chaos was sparked in February 2020 when the A52 Clifton bridge over the Trent in Nottingham was part-closed.

Lane closures and speed restrictions were also imposed for three years on the M5 Oldbury viaduct near Birmingham as part of the biggest repair scheme of its kind carried out in the UK.

The RAC Foundation warned that motorists face similar disruption if a backlog of upgrades continues to grow.

Steve Gooding, the foundation’s director, said: ‘While the increase in substandard bridges year-on-year is not huge the picture over the last five years looks more like flatlining than sustained improvement, and with the threat of more severe weather events linked to climate change that must be a worry for the overall resilience of our highway network.’