‘I don’t know what to do’: Residents brace for worsening conditions in Echuca

Brown water lapped at Damen Boot’s shins as he stood in his front garden, shaking with shock.

“I don’t know what to do,” he said. “What can you do? I don’t think there’s anything you can do. It’s just overwhelming.” 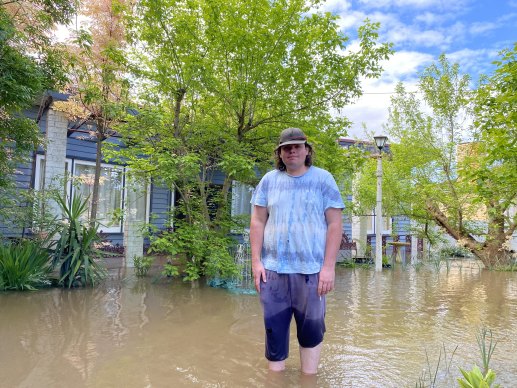 Damen Boot outside his inundated home in Echuca.Credit:Bianca Hall

Boot, 24, left his home of five years – on the bank of the Campaspe River in Echuca – on Saturday. When he returned on Sunday afternoon, the home was inundated.

Up to 1000 properties in Echuca were expected to be flooded on Sunday, as the Campaspe River broke its banks and steadily rose above 96 metres.

Late on Sunday, Vic Emergency warned worse was to come. The Murray River at Echuca Wharf was likely to exceed the major flood level of 94.4 metres above sea level on Monday, and could reach 95 metres on Wednesday or Thursday, a similar level to the 1993 floods. 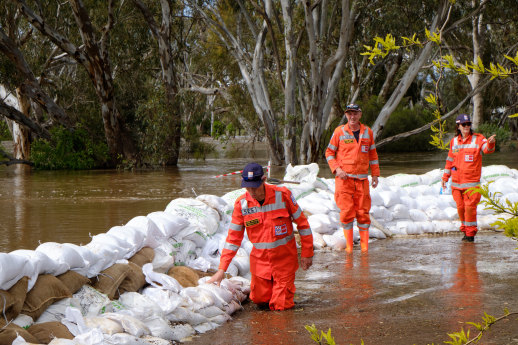 “We are expecting a peak [on Sunday] afternoon of 96.3 metres at that location, and this will mean that there will be around 1000 properties that will either be surrounded, or some of those inundated, by floodwaters,” Wiebusch said.

“That will be the first of two peaks for the Echuca community, with the Murray River then coming into play again Monday into Tuesday.

Colin Makin, whose home faces the river, said the water level had risen one metre in less than 24 hours. In parkland on the side of the river opposite his home, a children’s playground was almost completely submerged, with only the yellow plastic top of a slide visible. 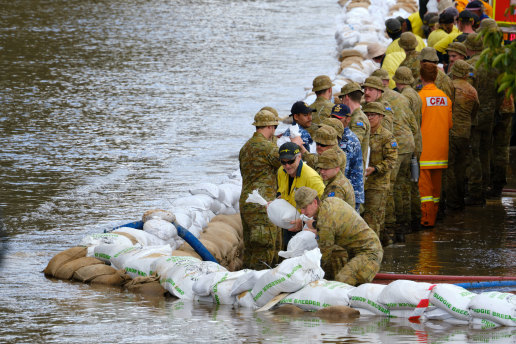 CFA, Army and Airforce crews have been helping with the mammoth sandbagging effort.Credit:Erin Jonasson

Echuca is the closest town to the junction of the Campaspe, Goulburn and the Murray rivers.

There are growing fears in the town that after the Campaspe flooding peaks, the Goulburn River will bring floodwater from Shepparton and Mooroopna.

After that, flood water will then rush into the Murray River, which snakes around Echuca and is fed by the other two rivers. 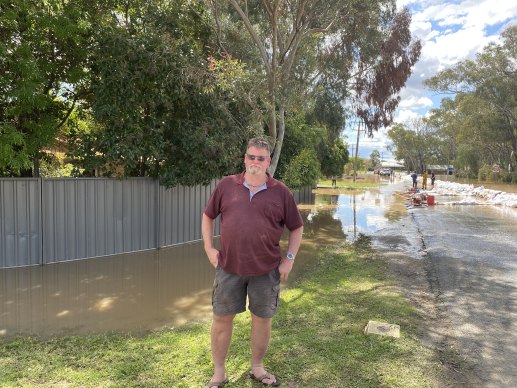 Graeme Glanville worked through the night to save his home in Echuca.Credit:Bianca Hall

On Ogilvie Avenue, part of the Murray Valley Highway, residents undertook a superhuman effort to save homes as the swollen Campaspe River rushed downstream and flowed sideways.

The highway was closed, effectively cutting Echuca in two, as a high dirt levee was built along one side of the road to hold water from the river’s broken banks back from homes on the other side of the road.

On the levee side, homes were in a metre of water.

A road usually separates Graeme Glanville’s home from the river. On Sunday, that road was a line in the sand that residents were determined to hold.

When he came into the house about 6:30am ready for a sleep, he saw the water start to rush around the back of his house, around the sandbag defences. “The water was only a trickle then,” he said.

He borrowed a pump, but within minutes the pump was covered with water. A second pump, carrying water over the sandbags and back into the swollen river system, was holding the line. For now.

In the 2011 floods that swept through Echuca, the Campaspe River peaked at 92.85 metres. But the Murray is higher than it was in 2011, which is making locals nervous.

“It’s certainly a lot higher than it was the last time, and it’s still climbing” said Greg Southern, whose backyard and sheds flooded on Sunday. He was hopeful, but not certain, his home would stay dry.

“This [flooding] is the Campaspe effect, and then they’re saying mid-week the Goulburn will dump down,” he said. “And then the Murray. Everything leads into the Murray, all the waterways, so the Murray cops it.”