Some patients in Melbourne hospitals are being sent directly home from intensive care units instead of transferring first to general wards, which doctors say is highly unusual, and a measure of the shortage of beds across the system.

The phenomenon, known as “ICU exit block,” occurs when patients have sufficiently recovered to be shifted to a general ward but can’t find a bed. It comes amid strain across the hospital system as Victoria approaches the expected peak of the winter COVID and flu outbreaks. 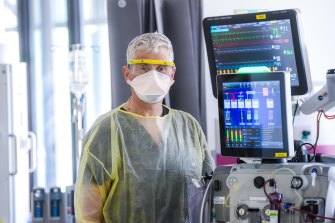 Western Health ICU director Craig French confirmed there had been instances at the Footscray and Sunshine hospitals in recent weeks where patients who no longer needed intensive care had been kept in the unit until they were ready to be discharged home.

He described it as a rare but not an unprecedented occurrence and stressed that patients were only being sent home when it was safe and medically appropriate.

In the early stages of the pandemic, insufficient ICU capacity was seen as a weak link in our COVID preparedness, but now intensive care is one of the areas of the health system that still has reserve capacity. “I can reassure people that there is reliable access to intensive care,” Dr French said.

“When we make the decision that someone can go to the ward we would like to send them to the ward within the next six hours or so,” Dr French said. “When the overall system is at high capacity and there are many competing demands, sometimes there is a delay.”

“It is all about managing competing priorities.”

Dr French said this was a problem for ICU departments at all major hospitals across Melbourne.

“We have got a lot of patients continuing to come in, our staff are tired, we have got sickness amongst our staff,” he said. “It is nowhere near what it was in January, when we had significant numbers of staff furloughed with COVID.” 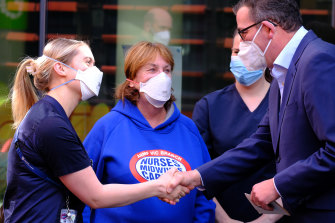 Premier Daniel Andrews and Health Minister Mary-Anne Thomas visited Sunshine hospital on Sunday to announce an expansion of a training program that provides government funding for student nurses and midwifes to work part-time in public hospitals.

When pressed on when and how severe the peak of the current COVID wave was likely to be, neither offered a direct answer.

Andrews said there had never been an “easy winter” in the health system and the current one was particularly challenging because of the combination of a “nasty strain” of flu, COVID and the neglect of other medical conditions during the lockdown years. He encouraged people whose vaccinations were not up-to-date to talk to their doctors about the benefits of booster shots.

Thomas said the severity of the current wave would depend on whether people followed the public health recommendations to get vaccinated, wear a mask in indoor, public places, and stay home when sick. “The peak depends very much on the actions everyone takes,” she said. 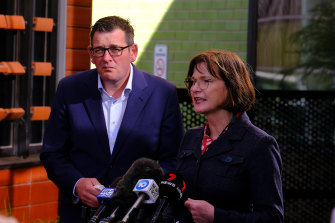 One of the issues adding to pressure on the hospital system in all states is the number of National Disability Insurance Scheme clients who are stuck in hospitals waiting for suitable accommodation.

The Premier confirmed that Roderick McRae, the state president of the Australian Medical Association, had proposed to him using the newly built Mickelham quarantine facility as interim accommodation.

Andrews described it as an “interesting idea” but did not commit to it. He said the 500 bed Mickelham facility, which currently costs taxpayers about $1.5 million a week to maintain, was being used to house 83 people who were infected with COVID and unable to isolate at home. “I expect those numbers to grow,” he said.