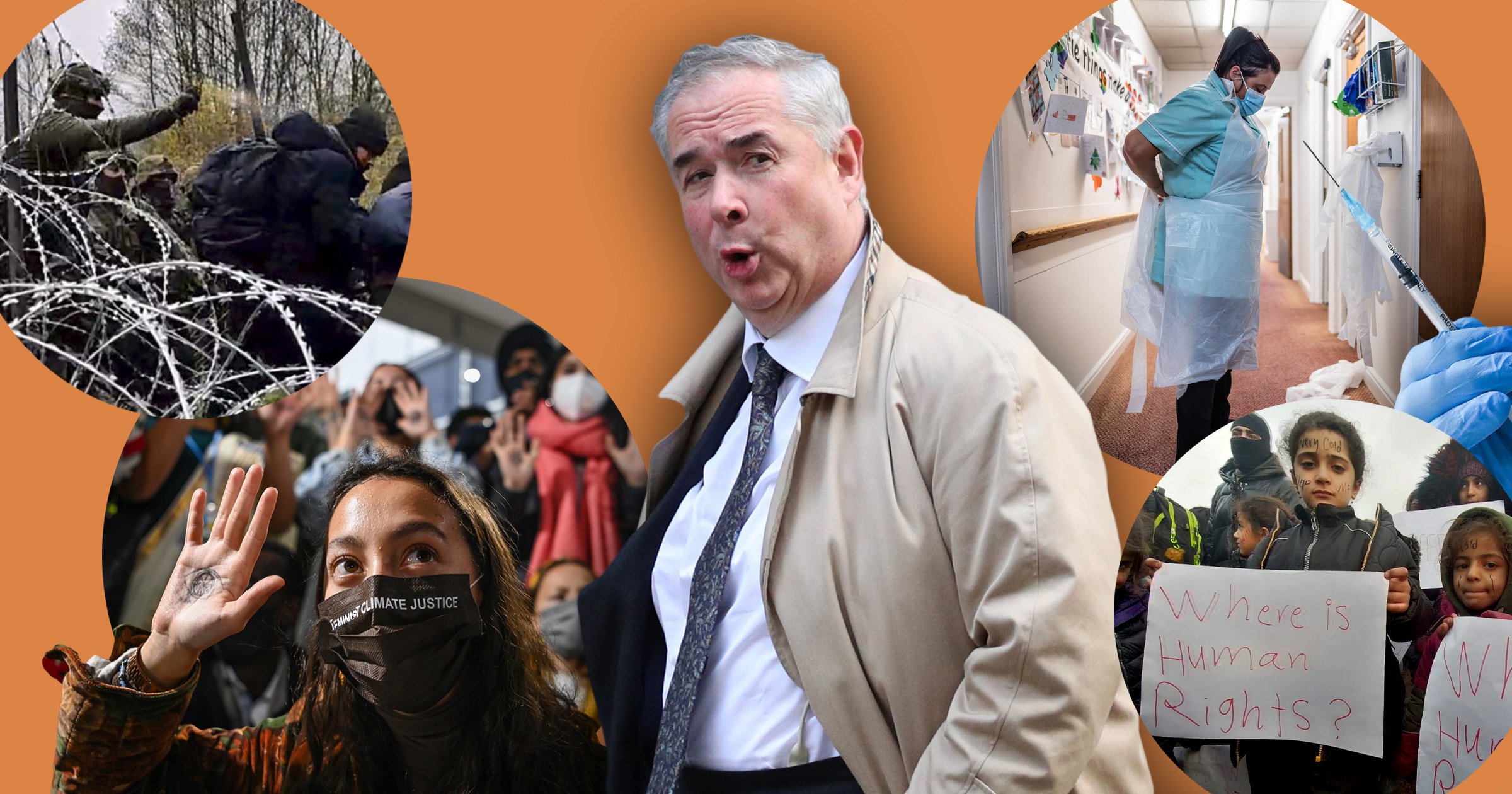 Okay, we get it. You’ve had a busy week, there’s been a lot going on, you were binge-watching Succession. We know how it is.

Luckily for you, we’ve been following all that stuff on your behalf and are here to get you up to speed.

It’s been a dizzying week, from jaw-dropping political scandal to genuine human tragedy on Europe’s borders – oh, and a bit of impending climate disaster thrown in for good measure.

Feeling out the loop? Here’s your 10-minute pub primer so you can look like you were paying attention the whole time – we won’t tell anyone the truth.

Boris Johnson is in deep trouble – but how did we get here? In short, last week, the House of Commons was asked to rubber stamp a damning report and suspend Tory MP Owen Patterson for breaking lobbying rules, but Boris ordered his MPs to hijack the process. They narrowly voted to scrap the independent standards regulator and save one of their own.

It’s fair to say it could have gone down better. After 24 hours of bruising headlines and fierce criticism from all sides, the government executed a speedy U-turn, which led to Mr Paterson resigning in disgrace. The Commons met on Monday to give the prime minister a bit of a kicking – but he didn’t show up because he was conveniently 300 miles away visiting a hospital (not wearing a mask).

That debacle led to a renewed focus on the wider issue of MPs having second jobs. That’s allowed – but it’s felt ex-Tory minister Geoffrey Cox took it a bit far by earning just shy of £1 million as a barrister, some of it while working from the Caribbean during lockdown. He’s likely to face a formal investigation and plenty of other MPs are under fire for their moonlighting too.

TL;DR: Boris barged in, bungled and backed down – and now his entire party is feeling the consequences.

Cop26 and the end of the world as we know it

At the same time as trying to rescue the reputation of his government, Boris Johnson is also overseeing the crucial Cop26 climate change conference in a bid to, y’know, save the world from famine, flooding and general eternal misery. Great timing.

Most of the big names have left Glasgow now (although Obama flew in to speak some truths) but the experts remained locked in the conference centre, working day and night to try and reach an agreement that keeps alive any hope of limiting global warming to 1.5 degrees. It is, to put it mildly, a bit of a biggy.

There were some eye-catching announcements this week, including on the NHS going carbon neutral, and criticism of the summit’s own green credentials.

But a deal on averting the worst impacts of climate change was not reached by the 6pm deadline on Friday – with key sticking points including subsidies for coal and other fossil fuels, and financial help to poorer nations.

Talks are expected to go on into Saturday afternoon with negotiators working through Friday night to hammer out an agreement.

So has Cop26 been a success? The jury is still out on that one and experts will pick the bones out of the deal over the coming days – but we can say one thing for sure: this was not the moment the world ended the climate crisis for good.

TL;DR: Cop26 is over, the climate crisis is not.

Tension and misery on Europe’s border

A dreadful situation is unfolding on the border between Poland and Belarus, where desperate people looking for a new life in the European Union are being used as pawns in a bitter political conflict.

This one has been rumbling on for a while. Belarusian president Alexander Lukashenko, often called Europe’s last dictator, has been accused of encouraging refugees to travel to his country and then cross into Europe on foot via Poland, Lithuania or Latvia. Why? Because the EU and other countries have been imposing economic sanctions on his regime for a while after he violently cracked down on protests following a disputed 2020 election. He’s also threatening to restrict Europe’s gas supply.

Dozens of flights from the Middle East are landing in Minsk every day but Poland’s national government won’t let them cross. The results is that thousands of Syrians, Iraqis and Afghans are sleeping in a freezing forest between the countries, with 15,000 Polish soldiers stopping them from passing and Belarusian security forces not letting them turn back.

TL;DR: Russia-backed Belarus has turned itself into a backdoor for refugees, which Europe is trying to force it shut – and desperate people are paying the price.

Jabs, jobs and an inconvenient truth

The Covid-19 vaccine has changed the world. Despite cases still being high in the UK, the number of people getting seriously ill and dying is way, way lower than it would be without the miracle jab. The situation remains on a knife edge but over one million people had the booster jab this week alone.

After the scandal of coronavirus care home deaths and the revelation that 11,000 died after catching the virus while in hospital for something else, it makes sense to insist health and social care staff get the jab to reduce the spread, right?

Well, there’s a snag. Tens of thousands of vital workers dealing with the most vulnerable have refused to get the vaccine. From this week, care home staff who have had two doses will be sacked. The government has announced the same will happen in the NHS from next April. Tens of thousands could be told they no longer have a job as a result of the policy, leading to warnings of a workforce crisis at a time services are already stretched to breaking point. This is a problem with no easy solutions.

TL;DR: Health and social care staff told ‘no jab, no job’ – but who’s going to replace them?

And now for the fun part…

Congratulations, you’re now a regular news hound, poised to wow your pals with your grasp of current affairs. But you’ve burned through your reserves of hard-hitting analysis, been asked to stop talking about Succession (final word: it’s overrated) and conversation has taken that fifth-drink turn to dafter matters.

Your old pal Metro.co.uk isn’t going to send you into a pub patter situation without a bit of the good stuff to lighten the mood. So did you know your taxes have contributed to to the NHS’s £3 million uphill struggle to extricate various household objects from the bottoms of kinky Brits?

New figures have revealed doctors had to recover implements used in daring bedroom experiments 3,500 over a nine-year period – and if that doesn’t get you talking through to closing time, nothing will.