By the end of December, 20-year-old Michael Moro felt it was inevitable he would catch COVID-19. It was just a matter of when.

Like many 20-somethings, who make up almost a third of Victoria’s wave of Omicron cases, Mr Moro, was not particularly concerned about the highly contagious yet less severe variant that has been flooding Australia. 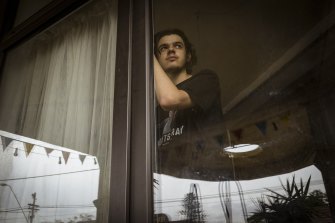 Michael Moro is in isolation after testing positive.Credit:Chris Hopkins

When he finally tested positive for COVID-19 this week, he simply began isolating in his bedroom in Brunswick to prevent his mother getting sick.

“You still feel a bit guilty, but there’s not necessarily that stigma,” he said.

Eric Seychell, from Coburg, said the greatest concern for young people now was becoming an unwitting, asymptomatic carrier who infects more vulnerable members of the community. 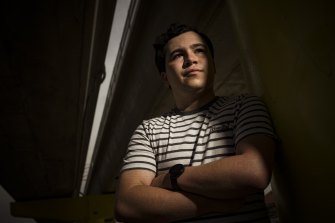 Eric Seychell said the young were being hit hard by the cost and unavailability of rapid tests.Credit:Chris Hopkins

“I’m not terribly worried about myself because I’m quite young, I’m fully vaccinated and relatively healthy. The concern I have is catching it and then passing it on to an elderly grandparent or an elderly family member,” the 20-year-old said. “That’s kind of what I’m seeing among a lot of my friends as well.”

Mr Seychell said young people had been hit hard by the cost and unavailability of rapid antigen tests.

“They’re quite expensive for a young person with a casual or part-time job, especially if you live out of home.”

Young people were also being potentially exposed to COVID-19 in their search for rapid tests and were frustrated by the potential to spread the virus while trying to do the right thing, he said.

Young people, like everyone else, wanted their lives back, returning to what people in their 20s did in the summer, instead of a state of self-imposed lockdown, Mr Seychell said.

“I think that it’s not something to overlook that young people have sacrificed the formative years of their lives in order to not only protect themselves and their family, but the wider community,” he said.

With infections more common, some young people, such as 21-year-old Catherine Walters from Diamond Creek, said they had developed a level of indifference towards the latest variant.

“With the new Omicron strain, I’m very casual and nonchalant about it, really. I feel like we’re all going to get this strain at some point. Everyone seems to be getting it because it’s super-highly infectious.” Ms Walters said.

“Earlier days when the main strain was Delta, I think everyone was a lot more worried, myself included, because we were seeing a lot more hospitalisations and it did seem more severe.”

Others, including Ms Walters’ cousin Sam Walters, were being more careful, restricting their movements in self-imposed lockdowns.

“It seems like everyone and their mum is catching COVID. It kind of feels like we’re in a lockdown even though we aren’t. I know some of my mates are isolating anyway so they don’t catch it before an important event,” the 21-year-old from Prahran said.

“I’d rather not catch it because I have a heart condition, even though the symptoms of Omicron seem more mild.”