Immigration officers were filmed clashing with protesters during a raid on a £130million construction site today.

The video, taken in Kingswood Street, Brighton, shows a woman standing in front of a Home Office van and blocking its path before falling to the ground – as officers armed with batons attempt to remove her.

Since 10am immigration authorities have been conducting searches on the Circus Street Development site, and a handful of protesters chanting open borders slogans had appeared at the scene. 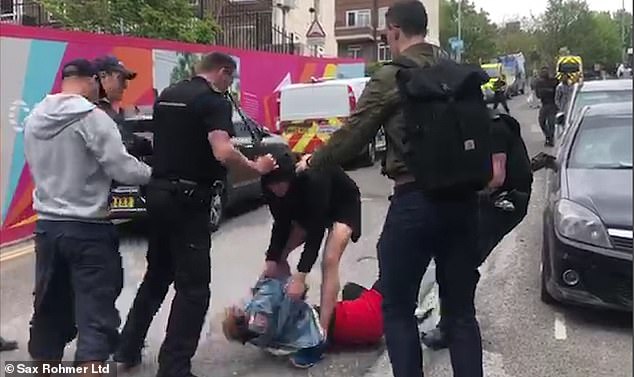 Pictured: An officer clasps his baton during the encounter on Kingswood Street in Brighton

Roughly 100 workers had left the site and were watching the incident unfold, the Argus reported.

In the footage, officers are seen dealing with the woman in the street, and one can be heard saying ‘back off’ as he pushes back a member of the public who rushes over.

At one point an officer was seen clasping his baton, and demonstrators – including the woman on the floor – chant ‘no borders, no nations, stop deportations!’

Officers are seen speaking to the woman as she lies in the street, and a small crowd watch the situation unfold – with several onlookers filming the incident on their mobile phones. 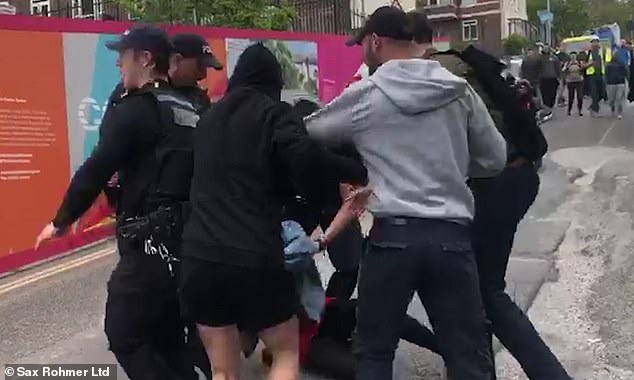 The Home Office van is then seen reversing away from the scene.

Jacob Berkson from Brighton Migrant Solidarity – the group demonstrating against the police action – had said the protest was about ‘preventing immigration snatching people from our community and putting them indefinitely in detention’.

He told the Argus: ‘We are a peaceful resistance to a hostile environment.

‘We’re here to support these people so [immigration officers] will think twice before coming back to our town.’

One witness, Adrian Hart, had said officers and dogs were going into the site, and a large number of workers were ‘expelled’ from the site and were ‘sitting around in the sun’.

A meeting between residents, developers U&I and building company Henry Construction is due to take place this evening, according to reports.

A spokeswoman for U&I had said they are committed to ethical practice and that the company was aware that Home Office officials had visited the site.