It almost feels like Melbourne’s landmarks are in pain during lockdowns.

The MCG wants fans scrambling through its turnstiles. Parks like Edinburgh Gardens want boozy picnics back on their turf. Queen Victoria Market misses the smell of fresh jam donuts and Melbourne Museum pines for the sound of kids on excursions to IMAX. 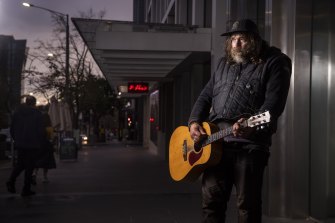 Chris Mineral has been busking on Spring Street for years, He continued playing during each lockdown – even though there was often no one to hear him.Credit:Paul Jeffers

Our gathering places look like they’re sad and hurting, a feeling CBD busker Chris Mineral knows only too well.

The rock’n’roll and blues guitarist has plucked away on Melbourne’s streets since the mid-80s when he was 20. He has been playing in the same spot at the bottom end of Spring Street for more than a decade. 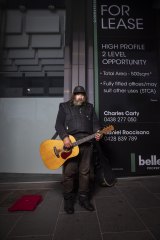 Lockdowns haven’t stopped Mineral. He’s continued to turn up for hours almost every night – a lone figure emanating a droning sound with only one shop open doing takeaway within several blocks and almost no passers-by.

“It feels horrific, like a ghost town in the daytime. It’s incredible compared to the energy and vibe of a normal city with 5 million people. It’s empty,” he says.

“But I come because this is real. Do I practise in a hotel room and hit a tennis ball up against the wall or do I go out onto the court and have other people there as well?”

“If you come out here to make money you’ll be heartbroken. It’ll kill you if that’s your raison d’etre. My main pride is playing the best music I can … and getting a groove on.”

When the MCG hosted footy matches, Mineral could hear the clamour of the crowd as he walked through Treasury and Fitzroy gardens. He’s convinced the “animalistic” roar of his fellow Tigers supporters generates the highest decibel reading.

Talking to the tall, bearded and grungy music aficionado can often turn into a history lesson for Melburnians who stop to chat; he seems to have an almost photographic memory of historical events, music, sport and the city.

For the majority, who don’t stop, they can expect Mineral to improvise playful variations of the lyrics of the song he’s singing to apply to them (including Age photographer Paul Jeffers, who was serenaded after photographing the busker on Friday evening).

He explains that one of the last times the MCG wasn’t hosting football matches was when the ground was occupied by 200,000 troops during WWII, including US forces led by famed US general Douglas MacArthur who escaped to Australia weeks before the Philippines fell.

Not since then has Melbourne faced such disruption. Reforms in the 1980s turned the city from an insular manufacturing town to a thriving cosmopolitan hub.

Melbourne was Australia’s fastest-growing municipality and the CBD had a million people walk through it each day before the pandemic prompted office workers to take their laptops home. Many Melburnians have barely stepped into postcode 3000 since March 2020.

Last September consultancy firm PwC estimated inner Melbourne would lose 79,000 jobs annually and bleed $110 billion in revenue over five years – worse than the 1990s recession and equivalent to the combined impacts on the city of WWI and the Spanish flu pandemic.

The CBD exodus has had the arguably positive effect of decentralising the city into villages, based around suburban employment hubs and shopping strips.

But a city planner’s dream doesn’t measure the spurned memories and cultural degradation associated with switching off the CBD for the best part of 18 months.

“One night I played ’til 6 in the morning. It was a magical night, everything flowed. It was like having a lot of money on [racehorse] Chautauqua in the TJ Smith Stakes and he comes from out of the clouds and wins,” Mineral says.

“And then all of a sudden, you have 15 people dancing around you and then a friend rocks up in his BMW at 6 in the morning and says I’m going to drive you home. That’s a great feeling, you can’t replicate that.”

The busker says the emptiness of the city hasn’t dampened his emotional state, but he misses the things that made him tick and which are hopefully only weeks away: live pub rock, the NGV, talks on literature and politics at the Wheeler Centre and eateries on Bourke Street like Pellegrini’s.

“I just acknowledge it – there’s not many people around … I still feel charged up and do the things I need to do,” he says.

“I miss the people who sing songs to me and sing with me.”