A man who pushed for 21 years to have Coon cheese renamed, saying the label was racist, is disappointed Indigenous people weren’t consulted about the product's new name, Cheer.

Author and anti-racism activist Stephen Hagan said he was glad and relieved that the cheese's manufacturer had announced the name change on Wednesday, to take effect in July, as he would no longer have to see the word "coon" – a derogatory term for a black person – every time he went to the supermarket. 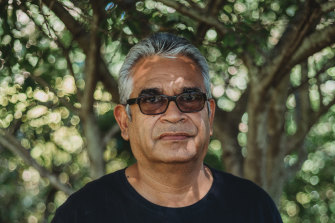 Dr Stephen Hagan campaigned for decades for the Coon cheese brand, which he considered racist, to be changed. Credit:Hannah Paulsen

Dr Hagan is not sure what the new name, Cheer, stands for. "I would have liked it to be something a bit more inclusive of First Nations people," he said. "We weren’t even consulted on names. We would like to have contributed."

Dr Hagan is pursuing legal damages of $2.1 million for what he says has been 21 years of corporations undermining his claims that the cheese brand was not named after American cheesemaker Edward William Coon.

Dr Hagan argues that Coon cheese instead started in Australia with Kraft’s Red Coon cheese in 1931, which used a different method to Mr Coon’s. Mr Coon patented a fast ripening process using high temperature and humidity that didn't kill all bacteria. Kraft's pasteurisation process killed all bacteria and lasted much longer in storage. 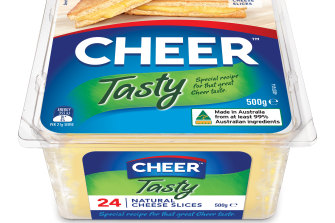 Dr Hagan believes Coon was instead named after the racial slur.

In announcing the new name on Wednesday, Lino A. Saputo, the Canadian chair and chief executive officer of Saputo Dairy Australia’s parent company Saputo Inc., said his company wanted to align with current attitudes and perspectives.

"Treating people with respect and without discrimination is one of our basic principles and it is imperative that we continue to uphold this in everything we do," Mr Saputo said.

"Our decision to change the name of Australia’s much-loved cheese reinforces this commitment to build a culture of acceptance, inclusion and respect where everyone feels a sense of belonging."

Dr Hagan, a Kullilli man now based in Darwin, said he was offended each time he saw a block of Coon.

In the early 1990s, he wrote to dairy farmers outlining his concerns, "and they wouldn’t even respond". In 1999, he complained to the Human Rights and Equal Opportunity Commission, who dismissed it.

Dr Hagan led the successful campaign to have the name, ES "N—-r" Brown, taken off a rugby grandstand in Toowoomba, and to have golliwogs removed from a chemist chain’s shelves.

He is now lobbying to have three racist terms deleted from Scrabble’s vocabulary: abo, coon and boong.

"If you normalise those words, you’re really normalising bigotry," he said.

'If you normalise those words, you’re really normalising bigotry.'

He said corporations had a responsibility to respect the whole community. "They’re not living in a white Australia. There’s a lot of different nationalities around now."

RMIT University associate professor of marketing Con Stavros said Saputo had carefully separated the announcement of the decision to discard the Coon name last July from the new name’s unveiling this week to draw consumers to the new brand and to move forward.

Dr Stavros said the company might have reached a "tipping point" in listening to consumer concerns.

However, Cheer being a short word and starting with a C, like Coon, and having a similar font and packaging, could help retain customer loyalty. "You want to make the change as subtle as you possibly can," Dr Stavros said.