Home » Injection of hope: how a COVID vaccine restored my faith in America

Washington: It was the email I’d been waiting for and almost missed when it finally arrived.

“It’s time to book your appointment,” read the subject line from the District of Columbia Health Department. The message landed in my inbox at 12.30am meaning that, by the time I logged on later that morning, it had been smothered by an avalanche of press releases.

I’m in my early 30s and don’t have any underlying health conditions so I’d been happy to wait for my turn for a COVID-19 vaccination. But envy kicked in as I watched young, healthy friends posting their post-jab selfies on social media. I was still waiting for an invitation from Washington’s lottery-style appointment system. 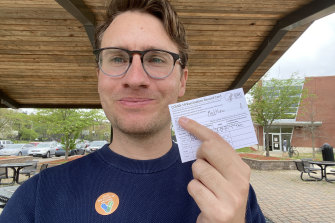 US correspondent Matthew Knott after getting the Moderna COVID vaccine in DC.

A week after becoming eligible for a vaccine, and having heard nothing from DC Health, I was getting antsy. A bit of digging revealed that some pharmacies in the capital were offering bookings directly on their website. I found a family pharmacy near the Capitol and snagged the solitary remaining slot for a Johnson & Johnson vaccine.

The email from DC Health arrived two days later, as if to prove the cliche that it pours but never rains. Now I could select from dozens of different times, locations and vaccine types. Like looking at a particularly appetising menu, the range of possibilities was almost paralysing.

A Moderna jab was available so I decided to cancel my existing booking. The idea of a one-shot vaccine appealed, but the Moderna appointment was a few days earlier. I admit I also liked the idea of receiving the vaccine that Dolly Parton helped to fund through a $US1 million ($1.3 million) donation to COVID-19 research.

The 75-year-old country music legend won even more admirers by waiting to get the Moderna shot until well after she was eligible. “I didn’t want to jump line,” she said in February. “I didn’t donate the money so I could be protected. I did it for everybody.”

It turned out to be a good call: all upcoming J&J bookings in Washington were cancelled this week while health authorities investigate extremely rare cases of blood clots.

Polls show around a third of people in the US are hesitant about getting a vaccine or downright opposed. I was the opposite. I counted down the days to my appointment like a child waiting for Santa to arrive.

When the moment came on Thursday (AEDT), the process was a breeze: after filling in some basic health information and presenting my ID I waited for my number to be called. When it was my turn, the vaccinator asked if I had any concerns. To the contrary, I replied. Despite my face mask, he said he could tell I was excited by the smile lines around my eyes. I barely felt the jab go in and experienced no side effects afterwards besides a sense of mellow euphoria. The whole thing was done in 45 minutes.

On a personal level, being vaccinated offers an escape from the omnipresent threat of contracting, or transmitting, the virus. It opens the possibility of gathering with large groups of friends again; of going to the theatre or a dance floor or a crowded bar.

I felt something else too as I walked out of the recreation centre with a band-aid on my upper arm. A sense of pride – there’s really no other way to describe it – in the country I’ve called home for almost four years.

Living through the pandemic as an Australian in America had previously been a dispiriting experience. The numbers say it all: the per capita death rate here is 40 times higher than back home.

And while some of Australia’s more draconian restrictions, like snap state border closures, look excessive from afar few would trade it for the lax approach here.

Forget hotel quarantine: until January you could fly into the US from most countries without even having to present a negative COVID test. Just as mass shootings have become unremarkable events here, the country seemed disturbingly numb to the thousands of people dying each day from the coronavirus.

I was not alone in thinking that America’s woeful pandemic response reflected a once-mighty superpower in decline.

That narrative has been undercut by the stunning success of the US vaccination program. I am now among the 124 million people in America – 60 per cent of the adult population – to receive a vaccine.

In a country riven with political division, the rollout has been a rare bipartisan triumph (not that either Democrats or Republicans want to admit it). Donald Trump recognised the importance of vaccines early and threw money at the issue. Joe Biden has secured hundreds of millions of extra does and ironed out the kinks in the rollout.

I’ll never consider myself an American. I could live here for decades longer and not understand Fahrenheit, call a rockmelon a cantaloupe or be able to say “y’all” with a straight face. The abundance of handguns, byzantine healthcare system and hyper-partisan electoral process will never seem normal to me.

But the rollout has reminded me, and many Americans, of this country’s strengths. That it’s a scientific powerhouse, a place where innovation flourishes. A country that, for all its flaws, is still capable of getting big, important things done.