A Disney employee is facing backlash online after being caught on video interrupting a couple’s wedding proposal at one of its theme parks.

The footage, posted on Reddit’s “I Am a Total Piece of [expletive]” forum, is titled, “POS destroyed my best friend’s moment. He asked for permission beforehand.”

Footage in the 21-second shot shows a man dressed in all white drop to one knee on a platform in front of the Sleeping Beauty Castle. As the man presents the ring in a box to his love, an employee, donning mouse ears, jumps in between the couple and grabs the box out of the man’s hand.

The man, who appears confused, rises and says, “She said yes,” as a crowd of onlookers boo behind the employee.

“Yes, that’s right, but over here is going to be even better,” the employee responds after descending a platform of stairs all while spectators continue to boo.

‘You pay either way’: I saved more than 6 hours using Disney Genie+ at Disney World. Here’s why it’s worth it. 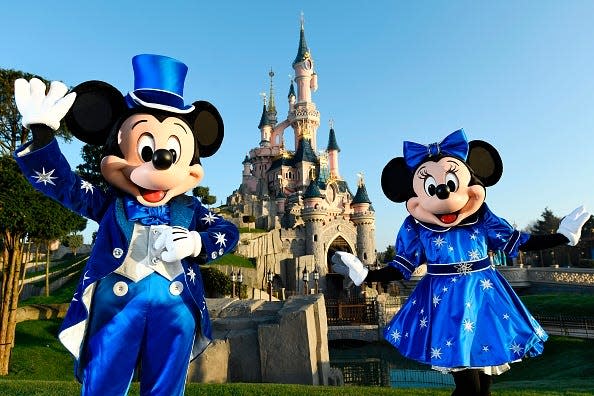 The move, drew backlash across the multiple internet platforms.

“This is awful. Disney claimed they will ‘make it right’ (whatever that means). But there you have it guys, Disney can also ruin your dreams,” Orlando Gaud posted on Twitter.

“If some stranger ran up and snatched a diamond ring out of my hand, more than the moment would be ruined,” Reddit user David Random posted below the video.

Disneyland Paris employee ruins marriage proposal. This is awful. Disney claimed they will “make it right” (whatever that means). But there you have it guys, Disney can also ruin your dreams 🤷🏻‍♂️ https://t.co/hn8TGK7juG

As of Tuesday, the video had been upvoted nearly 100,000 times, with a majority of its viewers dissenting from the employee’s interruption.

“We regret how this was handled,” a Disney spokesperson told Newsweek. “We have apologized to the couple involved and offered to make it right.”

Disney did not immediately respond to USA TODAY’s for comment on the company’s offer to the couple.

Natalie Neysa Alund covers trending news for USA TODAY. Reach her at [email protected] and follow her on Twitter @nataliealund.