IOC says Peng Shuai is in ‘a difficult situation’ as they hold new video call with her: Beijing state media accuses WTA of ‘coercing’ the tennis star into ‘supporting Western attack’ by suspending tournaments in China

The International Olympics Committee (IOC) confirmed today they had a second video call with Chinese tennis superstar Peng Shuai, amid concerns about her wellbeing and safety.

An IOC team spoke to Peng on Wednesday night, just before the Women’s Tennis Association (WTA) suspended all tournaments in China after its chairman Steve Simon expressed ‘serious doubts’ as to her safety in a statement.

‘We share the same concern as many other people and organisations about the wellbeing and safety of Peng Shuai. This is why, just yesterday, an IOC team held another video call with her,’ the IOC said in a statement.

‘We have offered her wide-ranging support, will stay in regular touch with her, and have already agreed on a personal meeting in January.’

The IOC also commented that she seemed ‘safe and well given the difficult situation she is in’.

The Olympic committee first spoke with Peng in November. Beijing is set to host the 2022 Winter Olympics next February.

The IOC’s comments came as China’s Global Times newspaper editor today accused the Women’s Tennis Association (WTA) of ‘coercing’ Peng to ‘support the West’s attack’ on Beijing by suspending tournaments in the country. 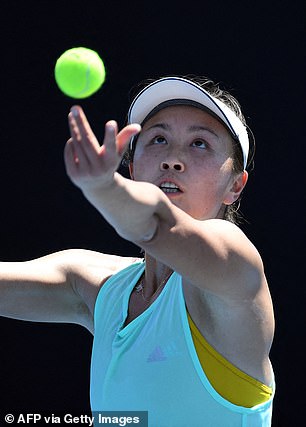 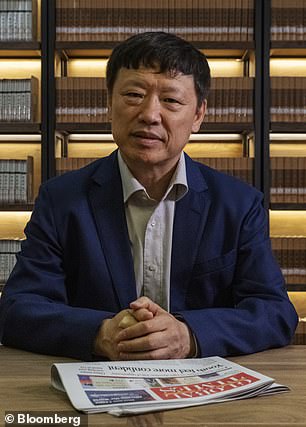 Infamous for his combative tweets, pro-Chinese government editor Hu Xijin has been very outspoken on the scandal involving Peng and her accusation of sexual assault by former Vice-Premier Zhang Gaoli, despite the relative silence of Beijing and other top officials.

‘WTA is coercing Peng Shuai to support the West’s attack on Chinese system. They are depriving Peng Shuai’s freedom of expression, demanding that her description of her current situation must meet their expectation,’ Hu said on his official Twitter account in a post which cited the WTA’s announcement.

The WTA on Wednesday announced the immediate suspension of all tournaments in China citing concerns about the wellbeing of Peng, a former doubles world number one, and the safety of other players.

The message on Weibo has since disappeared, and she has been pictured in videos and photos posted shared by the Chinese state media attending a dinner with friends, at a children’s tennis tournament, and WTA chair Steve Simon had a half an hour conversation with her on November 21, after a nearly three-week absence.

However, critics have claimed the photos and videos seem dubious, and concerns have been raised as to how free she actually is. 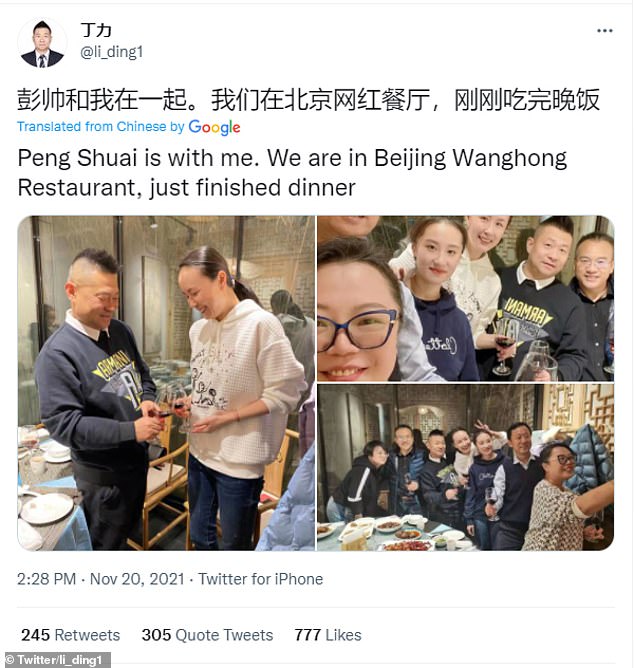 Peng has been pictured since her nearly three-week disappearance, but some are worried about her well-being

Djokovic hailed the stance as ‘very bold and very courageous’, while 12-time Grand Slam singles winner King tweeted that the WTA ‘is on the right side of history’ in its decision to suspend the tournaments.

The WTA could lose a lot of money with the move to suspend tournaments, as China is considered a large market, and in 2019, China hosted 10 WTA events with total prize money topping $30 million.

The Global Times is published by the ruling Communist Party’s People’s Daily, and considered a mouthpiece for the Chinese state.

Peng’s whereabouts became a matter of international concern following a nearly three-week public absence after she posted a message on social media in early November, alleging that China’s former Vice-Premier Zhang Gaoli had sexually assaulted her. 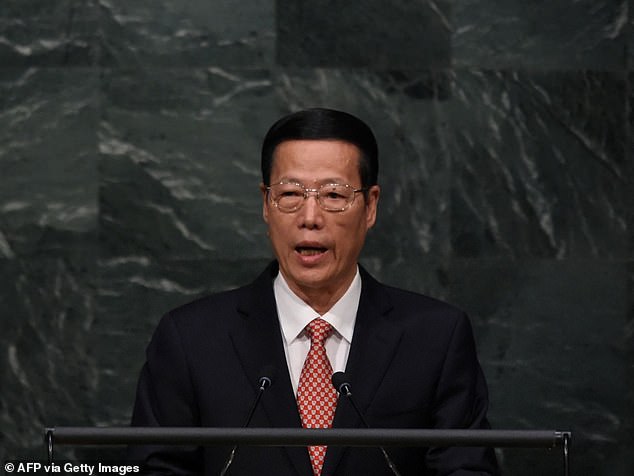 Neither Zhang, who retired in 2018, nor the Chinese government have commented on Peng’s allegation.

Peng appeared in mid-November at a dinner with friends and a children’s tennis tournament in Beijing, with photographs and videos published by Chinese state media and by the tournament’s organisers showed.

On Nov. 21, IOC President Thomas Bach had a 30-minute video call with Peng, who competed at three Olympics, during which she told him she was safe.

But WTA chief executive Steve Simon, who said the decision to suspend tournaments in China had the full support of the WTA Board of Directors, said they were not convinced all was well with Peng. Aside from seeking assurances of Peng’s well-being, the WTA has called for a ‘full and transparent investigation’ into her accusations against Zhang.

‘In good conscience, I don’t see how I can ask our athletes to compete there when Peng Shuai is not allowed to communicate freely and has seemingly been pressured to contradict her allegation of sexual assault,’ Simon said in the statement announcing the WTA’s decision. 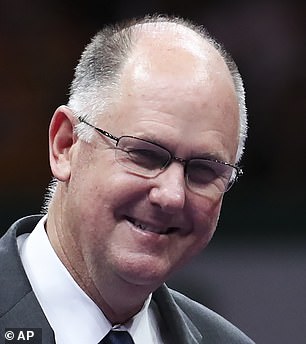 ‘I am also greatly concerned about the risks that all of our players and staff could face if we were to hold events in China in 2022.’

Hu, a prominent state media journalist, has used Twitter to comment on the scandal, and was among the first to publish images and videos of her appearances, serving as a de facto messenger to the world outside. Twitter is blocked in China.

He has said that these appearances by Peng should have been enough to relieve or eliminate most concerns for the player, but that people were ‘aiming to attack China’s system and boycott the Beijing Winter Olympics’.

China’s foreign ministry did not immediately respond to a request for comment and calls to the organisers of the China Open tournament went unanswered.

The ministry said late last month that ‘certain people’ should stop the ‘malicious hyping’ and ‘politicisation’ of the Peng issue.

Searches on the topic of the WTA’s suspension yielded no results on China’s Twitter-like Weibo on Thursday, and at least one post seen by Reuters that criticised the WTA’s move was later deleted

When on November 2, 2021, Peng Shuai posted an allegation of sexual assault against a top Chinese government official, the Women’s Tennis Association recognized that Peng Shuai’s message had to be listened to and taken seriously. The players of the WTA, not to mention women around the world, deserve nothing less.

From that moment forward, Peng Shuai demonstrated the importance of speaking out, particularly when it comes to sexual assault, and especially when powerful people are involved. As Peng said in her post, ‘Even if it is like an egg hitting a rock, or if I am like a moth drawn to the flame, inviting self-destruction, I will tell the truth about you.’ She knew the dangers she would face, yet she went public anyway. I admire her strength and courage.

Since then, Peng’s message has been removed from the internet and discussion of this serious issue has been censored in China. Chinese officials have been provided the opportunity to cease this censorship, verifiably prove that Peng is free and able to speak without interference or intimidation, and investigate the allegation of sexual assault in a full, fair and transparent manner.

Unfortunately, the leadership in China has not addressed this very serious issue in any credible way. While we now know where Peng is, I have serious doubts that she is free, safe and not subject to censorship, coercion and intimidation. The WTA has been clear on what is needed here, and we repeat our call for a full and transparent investigation – without censorship – into Peng Shuai’s sexual assault accusation.

None of this is acceptable nor can it become acceptable. If powerful people can suppress the voices of women and sweep allegations of sexual assault under the rug, then the basis on which the WTA was founded – equality for women – would suffer an immense setback. I will not and cannot let that happen to the WTA and its players.

As a result, and with the full support of the WTA Board of Directors, I am announcing the immediate suspension of all WTA tournaments in China, including Hong Kong.

In good conscience, I don’t see how I can ask our athletes to compete there when Peng Shuai is not allowed to communicate freely and has seemingly been pressured to contradict her allegation of sexual assault. Given the current state of affairs, I am also greatly concerned about the risks that all of our players and staff could face if we were to hold events in China in 2022.

I have been gratified by the massive amount of international support the WTA has received for its position on this matter. To further protect Peng and many other women throughout the world, it is more urgent than ever for people to speak out. The WTA will do everything possible to protect its players. As we do so, I hope leaders around the world will continue to speak out so justice can be done for Peng, and all women, no matter the financial ramifications.

I very much regret it has come to this point. The tennis communities in China and Hong Kong are full of great people with whom we have worked for many years. They should be proud of their achievements, hospitality and success. However, unless China takes the steps we have asked for, we cannot put our players and staff at risk by holding events in China. China’s leaders have left the WTA with no choice. I remain hopeful that our pleas will be heard and the Chinese authorities will take steps to legitimately address this issue.