Ireland’s coronavirus cases have soared to a record high and the R rate could be as high as three amid fears the new super-infectious strain mutant strain first found in the UK is ripping through the country.

Professor Philip Nolan of the National Public Health Emergency Team (Nphet) reported the R number could be between 2.4 and 3 as he acknowledged the country is experiencing the fastest rate of growth in the virus to date.

A further 6,521 new cases of coronavirus were confirmed yesterday and another ten deaths of people infected with the virus independent.ie reports.

More than a thousand people per million are now infected with the virus, far higher than the 200 per million recorded during the first wave of the pandemic. 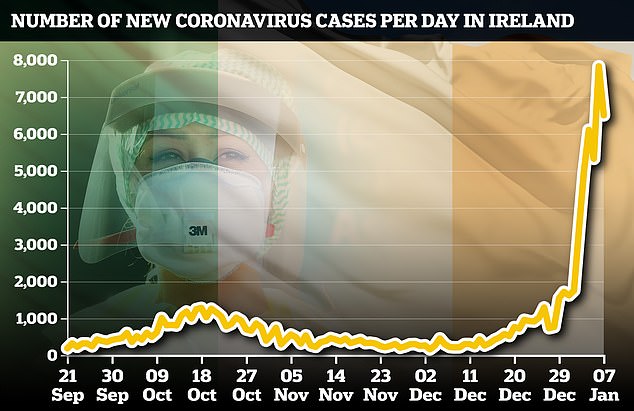 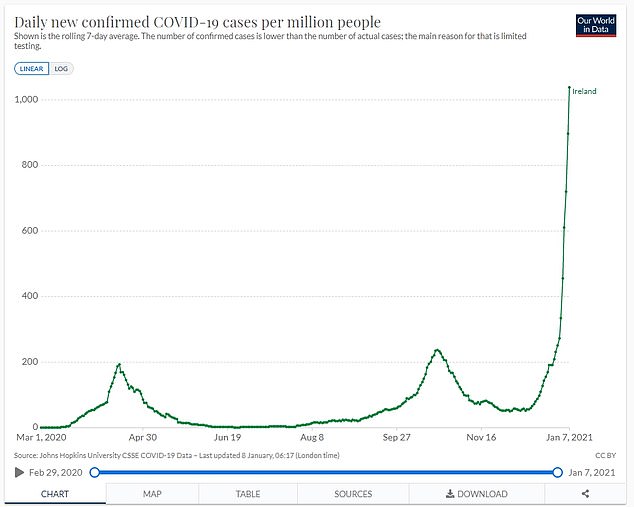 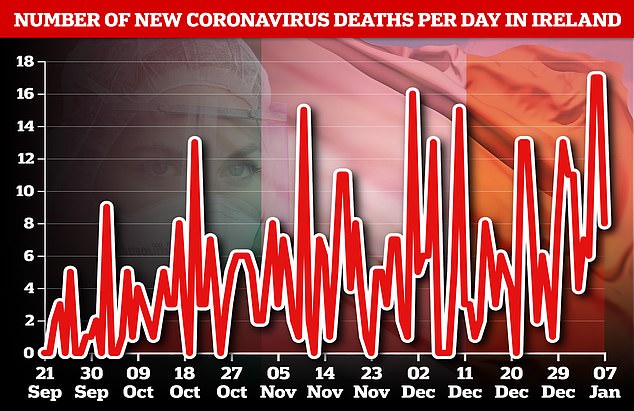 In a statement last night, Professor Nolan said the levels of coronavirus were ‘unprecedentedly high’ but suggested the effects of lockdown restrictions after Christmas as starting to show.

‘Worryingly, we are seeing very high incidence in those over 65, feeding into the hospitalisations and mortality that we’re seeing and will see,’ Prof Nolan said.

The scientist also reported the daily growth rate of the pandemic is estimated to be between 12 and 14 per cent.

This week alone there have been 41 coronavirus deaths, taking the total to 2,307 across the whole pandemic. 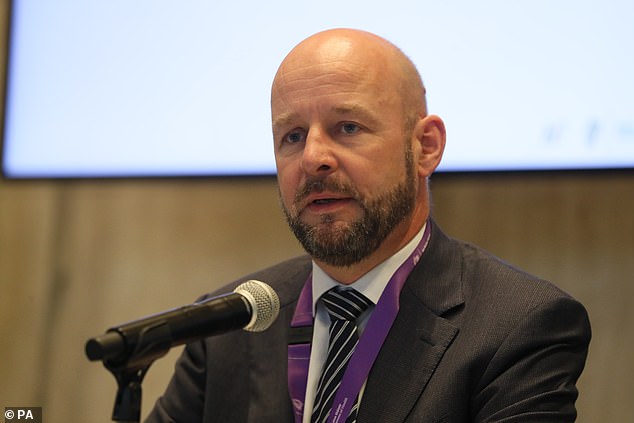 In a statement last night, Professor Nolan said the levels of coronavirus were ‘unprecedentedly high’

The total number of cases to date, as of yesterday, was 127, 657 and scientists confirmed the country’s incidence rate is at 936 cases per 100,000 population.

Projections from Nphet show gloomier days are yet to come as, in the worst case scenario, cases could plateau at around 8,000 cases a day in the next week.

Professor Nolan added: ‘An optimistic projection is that they are plateauing now and will fall to between 1100 and 2500 by the end of January.’

But he stressed in order to keep the R rate down people need to abide by the rules, staying at home and limiting social contact, to avoid spreading the highly infectious variant.

Chief Medical Officer and Chair of NPHET Dr Tony Holohan said yesterday’s figures were some of their worst they have reported and stressed people should cut down on the alcohol intake.

It is his belief alcohol consumption has contributed to the spread of the virus.

Dr Ronan Glynn, Deputy Chief Medical Officer of the Department of Health, reassured Ireland that there is no evidence to show the vaccine is ineffective against the latest mutant strain.