'Jeopardy!' champion Amy Schneider on being a transgender woman in the spotlight: 'It's just who I am'

When 16-day (and counting) Jeopardy! champion Amy Schneider gets recognized in public, as she was at her local Safeway recently, she's tickled.

"It's a fun feeling," she tells Yahoo Entertainment just ahead of her triumphant Dec. 20 return to the show. "I mean, I did have the moment, after that, thinking, 'If this ever stops becoming nice, I don't have a way to stop it,'" the mild-mannered quiz wiz adds after a beat. "But I'm not too concerned … I'm not going to be, like, Tom Hanks–level famous or anything! So, I think it'll be manageable."

If the 42-year-old Oakland, Calif. engineering manager is taking her newfound fame in stride, it's likely because she finds herself exactly where she's wanted to be since she was 5 years old, when the "dream" of being a Jeopardy! contestant first took hold. 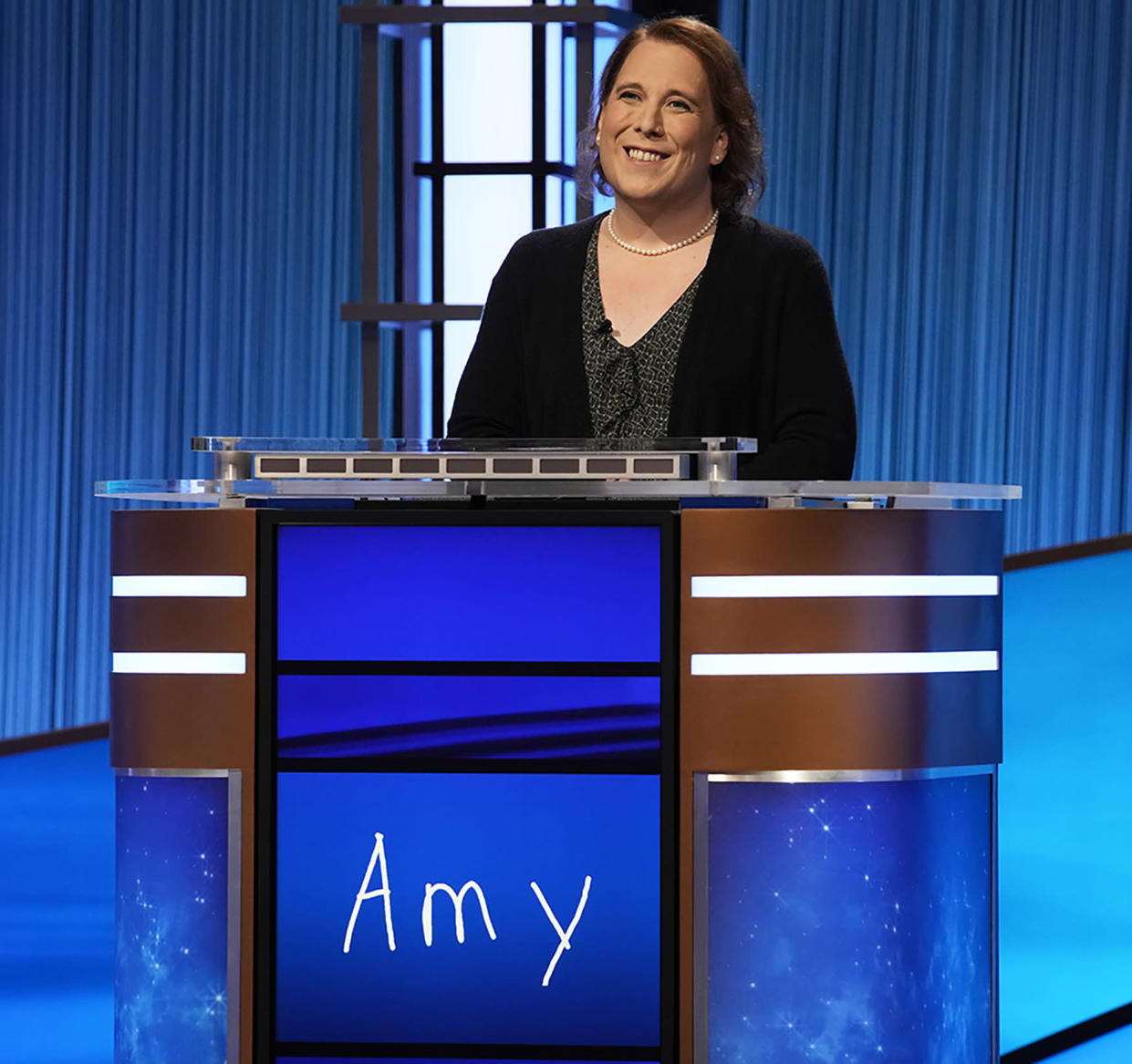 "I've always watched it and I've also always been interested in learning facts and stuff," she explains about the nightly joy that she remembers from as far back as kindergarten, when her parents were avid watchers. "And as I mentioned on the show, in eighth grade I was voted Most Likely to Be on Jeopardy! One Day. It was always sort of in my mind that it might be something I did at some point."

Now, with winnings of $631,400 as of Thursday, Schneider has become the fourth-highest non-tournament winner ever. Also, as a transgender woman, she has made history, as the first trans contestant to qualify for the show's Tournament of Champions, an annual competition of the year's best players, making an invaluable contribution when it comes to expanding the reach of transgender visibility.

As GLAAD's Nick Adams, director of transgender representation, noted in a statement this week, "Amy Schneider's incredible run on Jeopardy! allows families all over the country to get to know her as someone who is great at word puzzles, has in-depth knowledge on a range of topics, and who also happens to be a transgender woman. Amy is using her history-making appearances and new platform to raise awareness of transgender issues and share a bit of her personal story too."

The power of visibility

That's clearly a high priority for Schneider, who frequently shares personal details — from photos of her cat Meep and her Princess Ozma of Oz tattoo to telling how she met her partner Genevieve — with her 20,000-plus Twitter followers (though she's still a newbie on Instagram, having just enlisted a friend to help with her fledgling account, where she's been sharing details of her game outfits).

I may have been overly ambitious in my plans for today. More Jeopardamy content is coming, but for now please enjoy Meep, standing guard in bed, and helping me with my social media pic.twitter.com/DSZEIxpOc0

And, as she had boldly told ABC News earlier this month, "I am from Ohio where the only trans people I thought of were drag queens or prostitutes."

Now, Schneider tells Yahoo Entertainment, "That was definitely one of the factors that held me back from realizing I was trans for so long: I wasn't either of those things." She believed that being trans "was only for these type of, you know, 'weirdos,' or whatever. And so anything that can be done to show trans people as just normal people I think is a great thing. We want to get to a point where trans people are less pioneering and like, you know, that the first trans person to do whatever is just kind of like, whatever! Why wouldn't a trans person do that? Like, they could do anything that anyone else can do, and there's nothing unusual about it."

If the impact on Schneider not seeing herself reflected in the world is any indication, then what she's doing for others simply by being visible is huge: "College was a really rough time for me," she says, elaborating on a tweet in which she explained that her "primary activity in college was crippling depression." She adds, "I just wasn't really functioning … I didn't realize it at the time, but the fact that I had to be fake to everyone in my life at all times was really hard." It all led her to believe she was an anti-social person — something she's discovered, since coming out, is actually not even true.

In high school I was in drama club and marching band. My primary activity in college was crippling depression. https://t.co/Te1tkQXL59

"I'm actually a very social person," Schneider says, crediting not only coming out but also "years of therapy and … medication" for rescuing her from a dark place.

But for Schneider, being trans is just a part of who she is. "I don't actually think about it that much," she says. "I was definitely aware, going on the show, that being a trans person in the spotlight could be an interesting thing. But, you know, it's just what I am, and there's sort of, like, nothing to do about it. It's just who I am."

In fact, it's tuning out all the noise around what others think about it that keeps Schneider on her toes.

"One thing is that the show was taped well in advance, so the noise happened afterward, which was good," she says, noting that she's become well-practiced at settling into a focused, game-time mental state — as well as avoiding the toxicity of social media. Still, she says, the negativity is "not as much as I thought there would be. There definitely are people that are saying things to me that I want to respond to and get into a debate over, but I know that that's not going to go anywhere. I just have to ignore it —and you know, not go into the comment sections on anything."

But, she says, "The flip side of that is, so much of what I get on Twitter and Facebook is so positive and good. So, it's well worth it."

But what about how well she plays the game?

This week, ahead of her return, Schneider shared, in an essay for Defector, some answers to the question she hears most often: "How are you so smart?" To that, she writes in the piece, she often relies on "deflections and self-deprecation," explaining, "I generally take one of two approaches. One is to attribute my intelligence to factors outside of my control. With this approach, I'll generally observe that I was born with a brain that, for whatever reason, retains knowledge well … Another factor, of course, is my privilege. Unlike most people in history, I wasn't born into grinding poverty, and my parents believed in the value of knowledge as its own reward. Moreover, I am white, and until well into adulthood, was perceived as male."

Schneider places great value on the lessons from her family, telling Yahoo, "Just coming from a family that was well educated, valued education and knowledge in general … gave me a great head start." A great example of how they valued breadth of knowledge, she explains, is how, when she'd be studying for a spelling bee as a kid, her mom would help her by making cultural connections. "Instead of just going through words and spelling them correctly or incorrectly, she would like to go into the etymology of it," which would lead to all sorts of learnings on history, architecture, philosophy and the arts.

"And so, really teaching that it's not just this isolated thing of how to spell the word, but it's tied into things, and that I think both helps you remember facts — and also just makes things more interesting and makes you want to follow those threads," Schneider says.

How others can get Jeopardy!-smart, too

In terms of what categories to study up on, Schneider suggests, "I think what you do is figure out which ones you're not good at," and a good place to start for that is by studying J!archive.com.

"That has every Jeopardy! clue ever from the show's history, and that's definitely been my main thing during idle times, on commutes," she says, recommending that hopeful contestants go through the clues and pay attention to what you most often get wrong. "Like for me, that tended to be opera or classical music, which are things that I'm not particularly interested in, so I didn't know a ton about them."

Armed with that realization, Schneider took a tip from the book Prisoner of Trebekistan, by show champion Bob Harris — to get your hands on Opera for Dummies and Classical Music for Dummies. "Because that'll give you all the high-level stuff, and that's most of what they're going to ask on Jeopardy!, as Jeopardy! values a lot more breadth of knowledge than depth."

Schneider says it was "tough to watch" the show go through its recent rough times, "feeling like its image was getting tarnished a little bit." But she feels the stability — and its good name — returning.

"I definitely think that Ken [Jennings] is a great host and I would be happy to see him continuing," she says. "And you know, Alex [Trebek] himself always said that he wasn't the star of the show, that the contestants were, and the people out there who love Jeopardy! — that base of people who aren't going to be driven away."

Schneider agrees that the contestants, more than the host, are the stars — not to mention the writers. "When you stop and think about how difficult it must be to be writing, you know, 60 to 80 trivia questions every day, over and over again, in a very tight format … at just the right level of difficulty," she says, "I think it's really impressive."