Kanye West was caught on camera getting into a heated argument with a parent on the sidelines of his son Saint’s soccer game in Los Angeles this weekend.

In footage obtained by TMZ, West can be seen ranting and raving, wildly waving his arms about as he attempts to speak to another parent while the six-year-old’s game is in progress.

West could be seen gesticulating wildly before the conversation comes to an abrupt end and he storms off.

West, who now goes by Ye, shares custody over the children he had with his ex-wife, Kim Kardashian.

The rest of the family, daughters North, 9, Chicago, 4, and son Psalm, 3, were sat close by in lawn chairs. 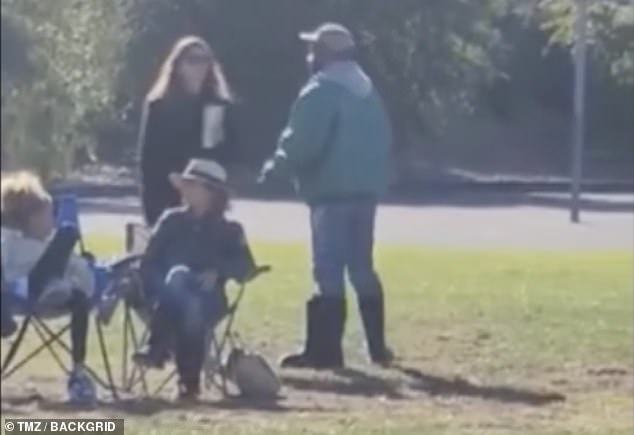 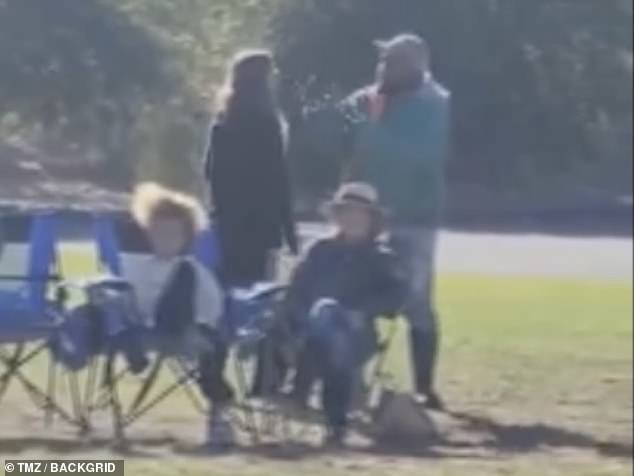 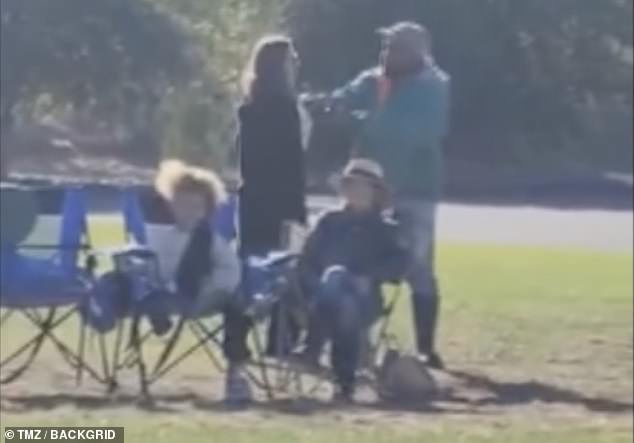 None of them reacted as the 45-year-old controversial rapper appeared to vent his frustration. It was not clear exactly what it is West had been getting upset about.

Another woman said to be a family friend, then approached him – but he just stormed off.

TMZ also noted how Kardashian, 42, and West did not interact during their son’s game.

Sports appear to have turned into a way for him to spend time with his children, and he has lately been spotted in the stands for Saint and his older daughter North’s basketball games.

It is the latest outburst from West who has been under fire recently for comments he made last month that were deemed to be anti-Semitic.

The rapper wrote in a tweet: ‘I’m a bit sleepy tonight but when I wake up I’m going death con 3 On JEWISH PEOPLE. The funny thing is I actually can’t be Anti Semitic because black people are actually Jew also. You guys have toyed with me and tried to black ball anyone whoever opposes your agenda.’

West was asked by Piers Morgan last week if he regretted the tweet and he said, ‘No – absolutely not, absolutely not … I fought fire with fire – I’m not here to get hosed down – that’s a different type of freedom fighter.’

His comments saw him lose hundreds of millions of dollars in business deals and advertising partnerships including GAP, Balenciaga and Adidas, who were the manufacturer, and distributors of the rapper’s highly successful clothing line and Yeezy shoe brand. Banking giant JP Morgan Chase has also dropped him. 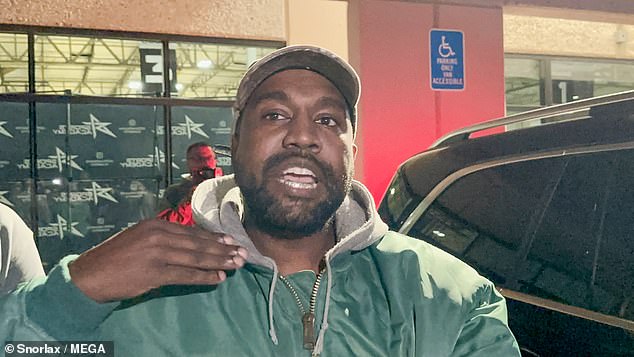 His total wealth plummeted as it fell from a reported $2 billion to around $500 million following Adidas severing ties with him.

While Kanye has been known to have unpredictable outbursts on social media – he was diagnosed with Bipolar disorder in 2016 – his rants have become more frequent this year.

On Friday night he went on a bizarre rant in front of gathered paparazzi in which he apologized for falsely claiming George Floyd died from the narcotic drug fentanyl rather than the reality which saw a Minneapolis police officer suffocating him by placing a knee on his neck for nine minutes.

West engaged with photographers for a lengthy conversation in which he also said he did not realize he was being anti-Semitic in earlier comments.

While West didn’t apologize while making his remarks, he did say that he had been ‘humbled’ with the furor costing him an estimated $1 billion in business deals.

West said he believes God has been humbling him for bragging often about his wealth – much of which he has lost due to suspended brand deals.

West has famously declined to take any mood-stabilizing drugs – despite his diagnosis.

He said that if a doctor were to mix up a pill of his, he could end up like Prince – who died by accidental fentanyl overdose – or Michael Jackson – who died of anesthesia poisoning. How much is Kanye – who claims to be the ‘richest black man in the world’ – really worth?

Forbes estimate that Kanye is worth around $2 billion, with DailyMail.com breaking down his individual deals:

West’s deal with Adidas was the crowning jewel of his fortune, with sales climbing to $1.7 billion in 2020 – earning him $191 million in royalties.

Forbes estimates that the Yeezy business with Adidas is worth $1.5 billion, and the company confirmed that they were likely to lose up to $250 million of their net income in 2022 as a result of the split.

His GAP collection was estimated at around $970 million when the deal was announced in 2021, but he has since terminated his work with the retailer.

Initial products sold out in 2021, after being announced in June 2020, in a partnership which was expected to last for ten years but was cut short by West.

GAP were also part of a deal between Yeezy and Balenciaga, with estimates claiming they would bring in $1 billion in projected sales.

West, who divorced Kim Kardashian in 2020, remains a partner in Skims but it is unclear how much he earns from that.

He previously ranted about owning 5 percent of the business, which is estimated at a $3.2 billion net worth.

If that is the case then he would have a $160 million stake in the company.

He has sold over 140 million albums worldwide, and documents seen by Forbes show that his own recorded music and publishing rights is worth at least $90million.

Between mortgages, advances and other liabilities, Forbes say West owes about $100 million.