‘I called him a predator to his face, in front of everyone’: Panel show comic Katherine Ryan reveals she confronted a TV colleague because she believed he is a sex pest – in shock confession to Sara Pascoe podcast

Comedian Katherine Ryan has revealed how she bravely confronted a colleague on a popular television programme because she believes he is a sexual predator.

In a shocking confession, she says that she also made the allegation about his behaviour in front of others working on the show.

Miss Ryan, 38, made the courageous revelation that there is what she considers to be an abuser working in the television industry during an interview with fellow comic Sara Pascoe, who she says is also aware of the man’s identity.

Speaking to Miss Pascoe during her new Amazon Prime series Backstage With Katherine Ryan, the Canadian star – who has appeared on shows including Have I Got News For You, Never Mind The Buzzcocks, 8 Out Of 10 Cats, Mock The Week and a League Of Their Own – said: ‘I’ve done a show with a person who I and you believe is a predator. What am I supposed to do? 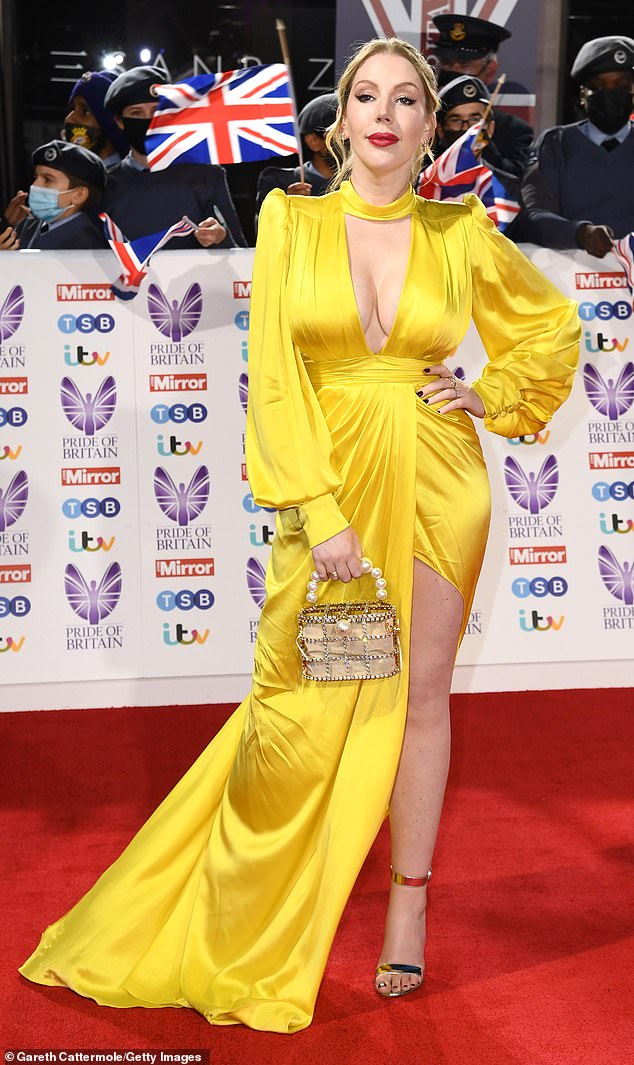 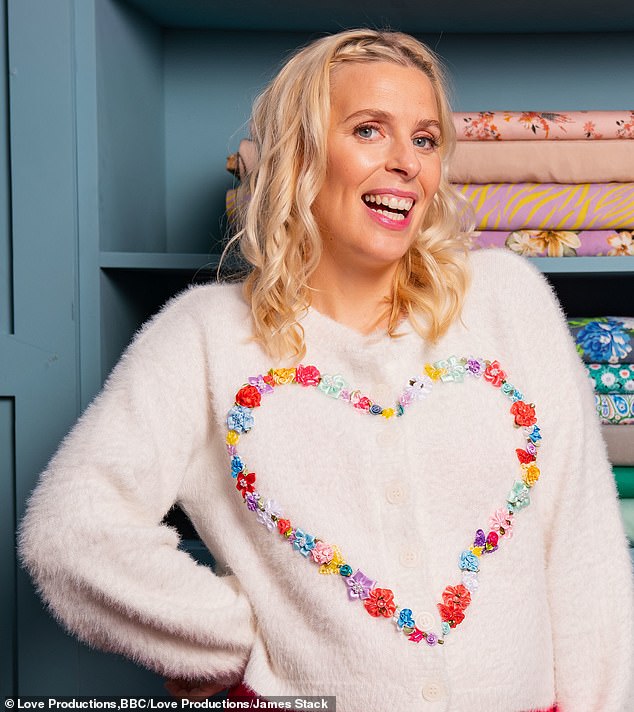 She was speaking to fellow comic and presenter, Sara Pascoe (pictured) when she made the revelations

‘I’ve thought about that, but it’s such a messy thing because I don’t have proof – what, am I not supposed to feed my children because of someone else?’

Miss Pascoe replied: ‘Also in that instance that you’re referencing it was about raising it.’ That prompted Miss Ryan to admit: ‘I raised it. I called him a predator to his face and in front of everyone every day.’

Meanwhile, Miss Pascoe revealed that she had reported a male celebrity to a television channel after receiving a phone call from a viewer who claimed to have been raped by him. 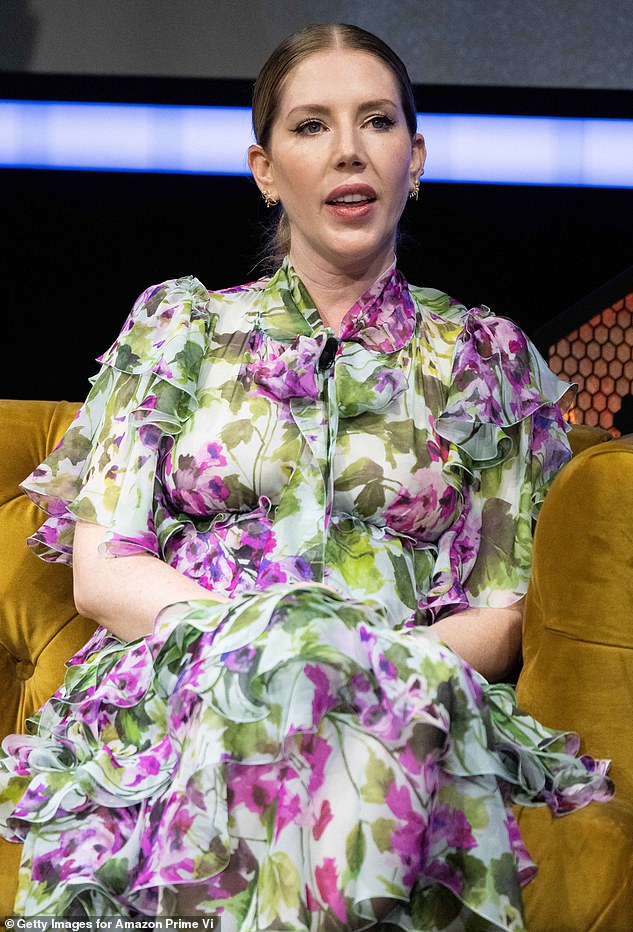 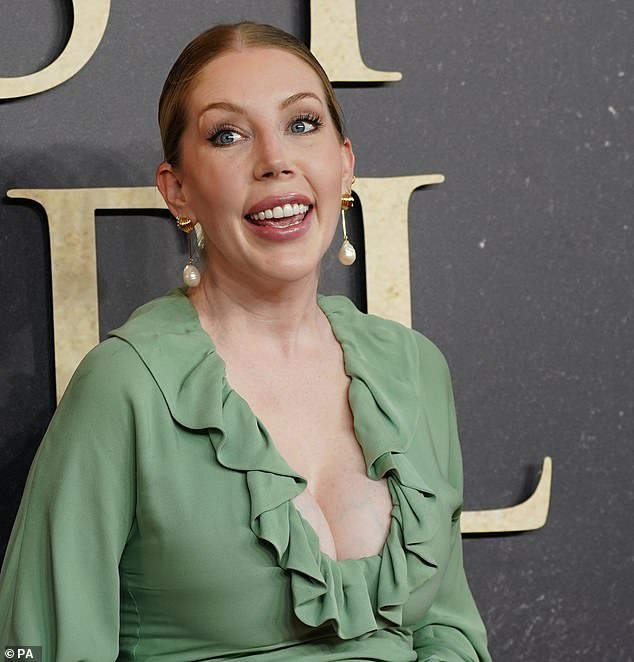 The Canadian star (pictured at the UK premiere of The Last Duel)  has appeared on Have I Got News For You, Never Mind The Buzzcocks, 8 Out Of 10 Cats, Mock The Week, Would I Lie To You? and a League Of Their Own

Miss Pascoe, 41, said: ‘Have you ever done a job and then someone’s contacted you and said: ‘That’s my rapist’? I had it on a job recently where I’ve had to go to the channel, and it’s that whole thing because you feel such a sense of responsibility but you also want it to be dealt with well… it’s so complicated.’ ITV and Channel 4 declined to comment. The BBC declined to comment. Sky was also contacted.

Miss Ryan joins a long line of high-profile women who have made similar allegations against sexual predators. They include Gwyneth Paltrow and Cara Delevingne – who both shared their experiences of abuse by disgraced film producer Harvey Weinstein.

Since 2017, several high-profile British celebrities have been the subject of MeToo allegations. 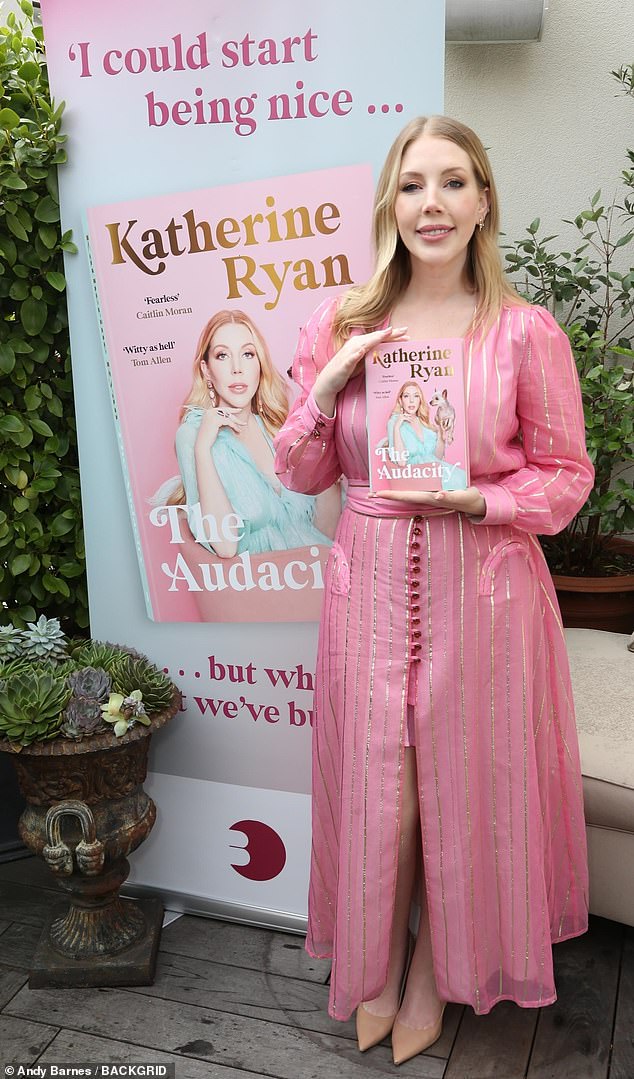 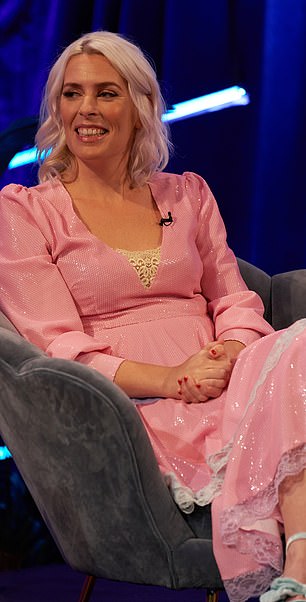 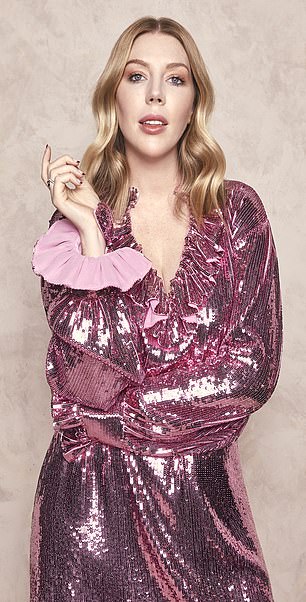 Miss Pascoe (left) revealed that she had reported a male celebrity to a television channel after receiving a phone call from a viewer who claimed to have been raped by him. Miss Ryan (right) joins a long line of high-profile women who have made similar allegations against sexual predators 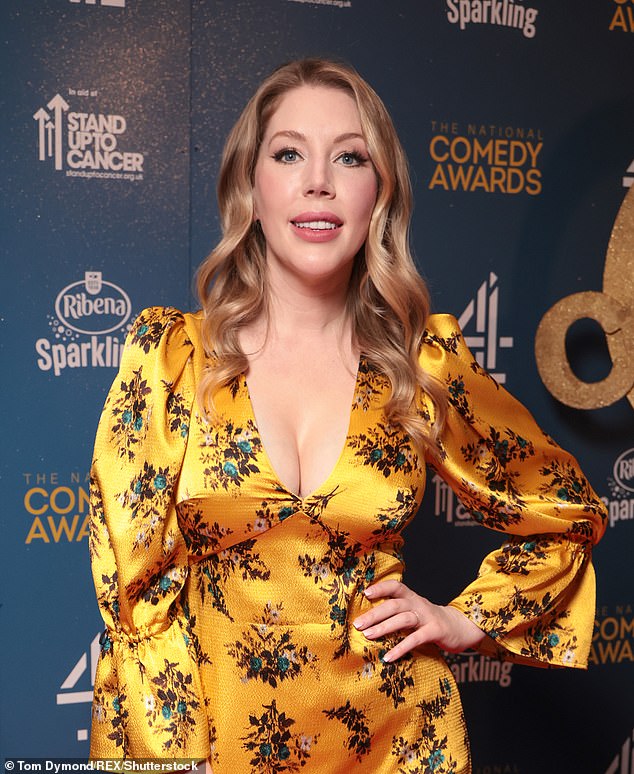 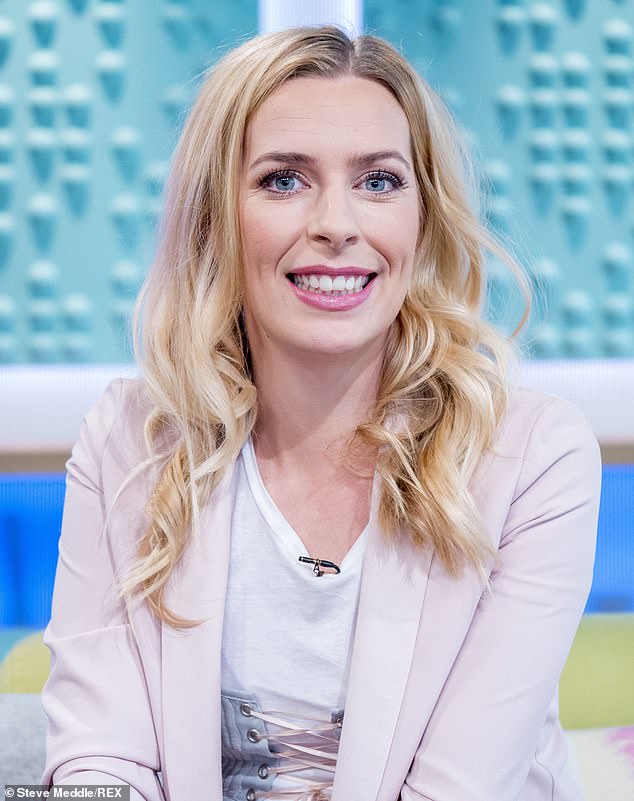 Miss Pascoe, 41, said: ‘Have you ever done a job and then someone’s contacted you and said: ‘That’s my rapist?’

Last year Doctor Who star Noel Clarke was accused of groping, harassment and bullying after 20 women provided accounts of misconduct to the newspaper.

In April, ex-BBC Radio 1 DJ Tim Westwood was accused of sexual misconduct by seven women in a joint investigation by BBC News and The Guardian.

Separately, more than 10,000 current and former secondary school students in the UK have shared their experiences of sexual harassment and rape culture anonymously on the website Everyone’s Invited.

Miss Ryan releases her series on Amazon today. In it, she interviews other comedians including Sue Perkins, Joel Dommett, Rob Beckett, Sarah Millican and Jimmy Carr.

‘I was groped in the lift at my chambers… so why didn’t I complain?’ One of Britain’s top female judges dares to ask why her generation didn’t do more to combat sexual harassment at the Bar

By Wendy Joseph QC for the Daily Mail

When I arrived at the Old Bailey in April 2012, I knew I would be the only female among the 16 appointed judges.

What’s more, I was only the third woman judge ever to preside full-time over the most famous court in our land. And it was immediately clear my presence was going to take the impressive team of barristers some getting used to.

It’s the custom that when a new judge enters the courtroom on their first day, the most senior barrister present rises to welcome them on behalf of the Bar.

As I walked towards my seat high on the Bench, a man down in counsel’s row got to his feet and bowed. I bowed back. He straightened his wig. I did, too. 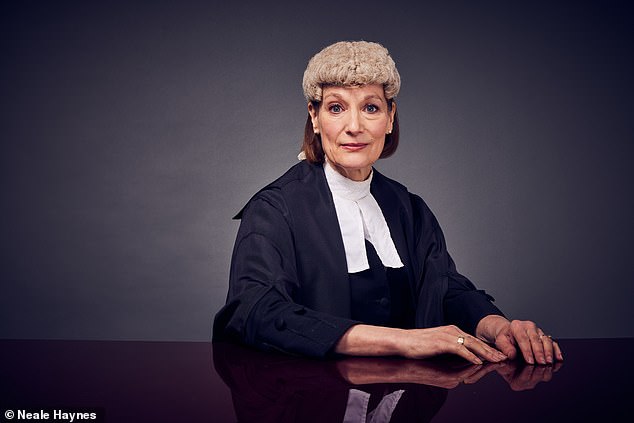 Wendy Joseph QC (pictured) looks back at being a young female judge in a male-dominated world. Wendy was the only female judge on the Old Bailey’s Bench when she joined

I was both thrilled and anxious, conscious of the importance of being a woman stepping into an overwhelmingly male domain. This was a significant moment. The barrister cleared his throat. ‘We at the Bar wish to welcome you, My Lord,’ he said.

My Lord! It must have been a slip of the tongue. Concerned it would sound horribly pompous for me to say ‘Actually, it’s My Lady’, I decided to ignore it.

Then he did it again. ‘It is a pleasure to have your Lordship amongst us,’ he said.

It wasn’t rudeness, I knew that. ‘My Lord’ was just hardwired into his brain. But for how long could I let this go on?

The third time I gave a little sigh, looked slowly down at my cleavage and then back up at him. We stared at each other. First realisation, then a deep blush crossed his face. Poor man. Neither he nor any other barrister made that mistake again.

Actually, I wasn’t especially surprised or upset. Like it or not, I was a novelty here. And like most professional women, I’ve suffered far worse slights during my career.

I retired this spring, aged 70. Over the 47 years since I was called to the Bar, there have been huge and positive changes for women across the legal landscape.

When I started out in the mid-1970s, while there were a few pioneering and brilliant female barristers who made it to the top, young women like me often just weren’t taken seriously in what was a man’s world.

This was made horribly clear when I took my first pupillage in a set of Chambers, shadowing a more senior barrister. The clerk — the man who organised the work and arranged each barrister’s diary — made a point of calling me ‘Sir’ from the moment I walked through the door until the day I left, six months later.

No one would get away with that now, or even think about behaving that way. But I didn’t complain because it didn’t occur to me that I could or should.

I hated the patronising tone male colleagues often took with me — and the uninvited arms around my shoulders, the unwelcome hands about my waist. But even when, in the tiny lift that rattled its way up the old legal building in the Temple, a hand slid down my hip and onto my bottom, all I did was stop using the lift.

This was a male-dominated world, and I can see, looking back, that as a very young woman, I allowed myself to be dominated. Thankfully, I was never more seriously molested, but I know there were others who suffered more.

It’s hard to see now why we — the young women at the Bar — didn’t get together, exchange our stories and bring our complaints into the light. I suppose we were locked into the system and didn’t have the courage or sense to break out. But the bias against women went further than unwanted advances.

It was galling when, in 1976 at the end of my year-long pupillage, I watched my male peers being offered permanent positions in their Chambers, while I scrabbled around trying to find one to take me on. I wrote endless applications. No one was interested. My meagre savings were fast running out, and with them my hopes. 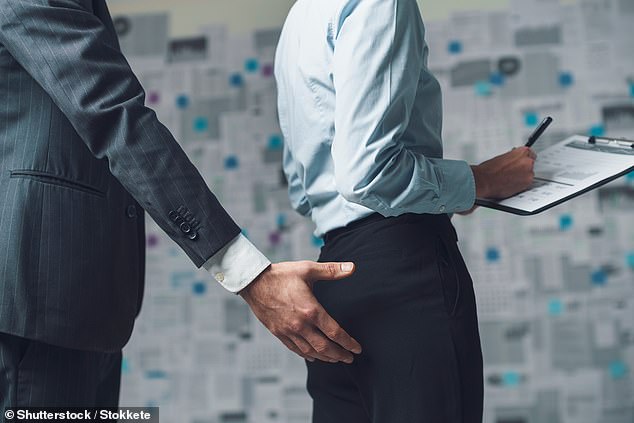 I began to apply for jobs outside of law. One was as a trainee manager at Marks & Spencer, where I was told I was hopelessly over-qualified. I saw an advert for a job in the office of the Director of Public Prosecutions, reviewing cases. I’d be a lawyer, but without ever seeing the inside of a court. Still, I got the job and wrote a letter of acceptance but I couldn’t bring myself to post it. Clearly, I wasn’t ready to give up yet.

Thank goodness, because three months later, I was offered a place in the Chambers of John Roberts QC, the first person of African ancestry to take silk at the Criminal Bar. I’m so grateful to John. Without that chance, none of what followed could have happened.

There have been many lucky chances along the way. I had a relatively ordinary childhood in Cardiff — I was a grammar-school girl, lucky enough to get funding from my local authority to study at Cambridge.

My dad sadly died when I was 16, and my mum and grandma worked running a little shop, providing for my younger sister and me. Without those grants, I couldn’t have started on the journey that brought me where I am.

Once called to the Bar, I soon realised that it wasn’t only my sex that set me apart from most of my peers. Many of the barristers around me had been to public schools and had a veneer of being part of ‘the club’, while my path had been very different.

But having got my feet on the ground at my first Chambers, I could forge a path through the legal system. This led, in 2007, at 55, to me making the permanent move from Bar to Bench, first at London’s Snaresbrook Crown Court, probably the biggest and busiest Crown Court in Europe. And then, finally, The Old Bailey.

Over the last ten years, I have presided over hundreds of trials.

I’m sometimes asked if I have special sympathy for women victims or accused, or if I have to force myself not to feel that way. But the truth is, my gender simply doesn’t come into it. In the judge’s head, nothing must be allowed to interfere in the need for universal fairness.

In my book, Unlawful Killings, I’ve tried to explain what it feels like to sit in a courtroom, to look into the eyes of a 16-year-old in the dock for murder, to see the heartbreak of the mum and dad listening to how their child ended up on a mortuary slab. 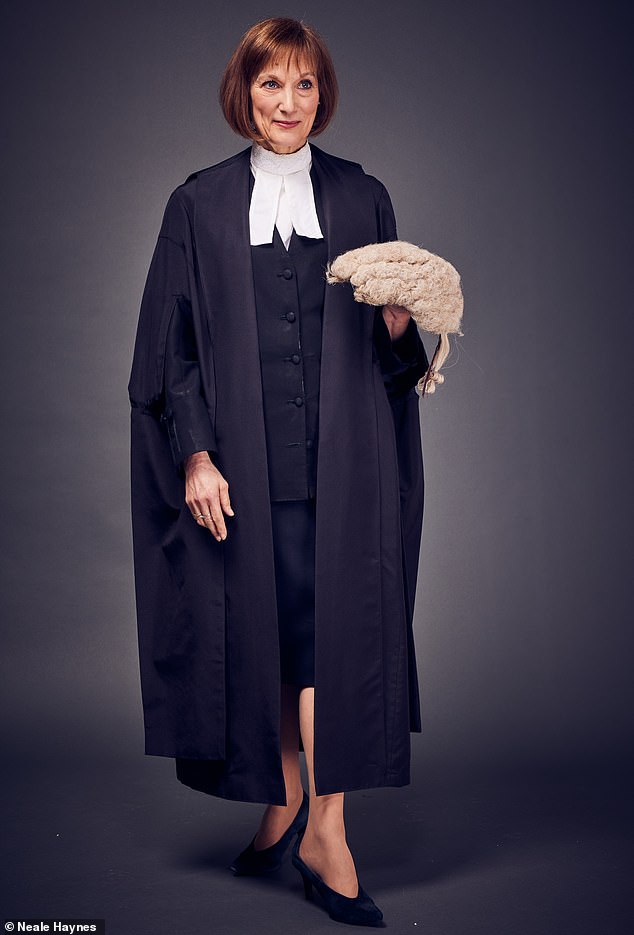 My career has, in many ways, consumed me. I’m married, but we didn’t have children. I’ll always have a pang of regret that I didn’t have a family. But if I had, would I have been able to do either job the way I’d have wanted?

The Bar is a tough taskmaster and I’ve seen too many promising young women barristers horribly stretched or even give up their careers altogether. But for all the struggles women have in the criminal law courts, I’m proud to say I am bowing out on a high note for women who work there.

I was the only female among 16 on the Old Bailey’s Bench back in 2012; by the time of my retirement true parity was finally achieved — exactly half of the 14 current sitting judges are women.

That’s how it should be. The Bench should represent the community it serves. And now — at least at the Bailey, and at least in terms of sex — it truly does.