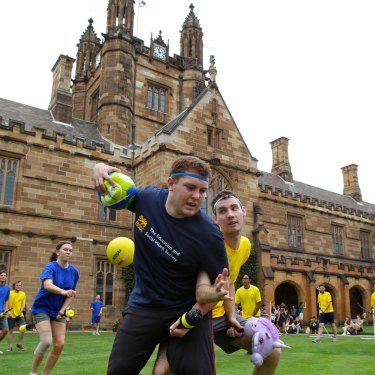 Students from the Quidditch Society, one of many quirky but beloved collectives, at the University of Sydney in 2013. Credit:Dallas Kilponen

My cousin Kiara Moore was having the time of her life. She'd had more than enough of Bendigo — the kind of town where there is one good club — where she grew up and made the big move to Melbourne and La Trobe University at the start of this year.

For a month, college life on campus was everything: hilarious rituals, a club for every night of the week, and new friends galore. "You would go out to get a drink of water and end up talking in the corridor until 4am," she says.

But it was over before it began. After a week of feeling like a real adult, free in a new city at the start of the university year, the show stopped. Melbourne went into lockdown. Social gatherings were called off and students headed back to their hometowns. For a while, Kiara, who is still in Melbourne working her essential retail job, was the only one left on her floor of about 20 first year students.

"It sucks," she says. That month was among the best of her life and there was so much more to do, from college balls to trips away, now all cancelled.

In some ways, I don't relate. Clubs are not my scene. I looked down on most college parties with mild disdain when I was at International House, a quasi-college at the University of Sydney, six years ago. But as much as I spent my youth removed from the clubs and college parties, the feeling of getting out of your home town, away from family (however much they are loved) and into a new space is something I relished. 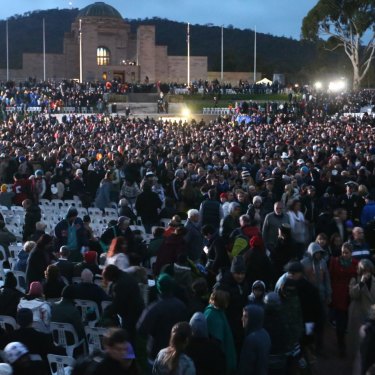 Canberra, where I grew up, and all too frequently return to report, is no Bendigo but the feeling of late-teen boredom is the same. After the umpteenth night my friends and I ended up driving to the dam or Mount Ainslie, which looms behind the War Memorial, to hang out (in hindsight, Kiara has the right approach) I decided I had to leave.

Sydney was the destination. Even in Canberra I could see its campus was the place to be. Someone had started a Quidditch society to run teams in a real life adaptation of the Harry Potter game wizards play on broomsticks. The debating society was vying to be the world's best and many of its members carried themselves with an air that suggested they knew it. Student politicians fought titanic battles over modest campus offices that nonetheless catapulted the more adept, or devious, to positions of real power.

I wanted in. Debating was my first home, student journalism my second. I did not play Quidditch.

The Doon, as he is known, is a classic of campus. Dressed in big black Doc Martens boots and an overcoat incongruous with his education at one of Sydney's well-to-do private schools, he has been leading protests against the Morrison government's degree price hikes. He won the SRC presidency, a post previously occupied by luminaries including Trump whisperer and former federal Treasurer Joe Hockey, in a viciously contested election with a young Liberal last year. This year, the presidency is uncontested. So is the election for the editors of Honi Soit. 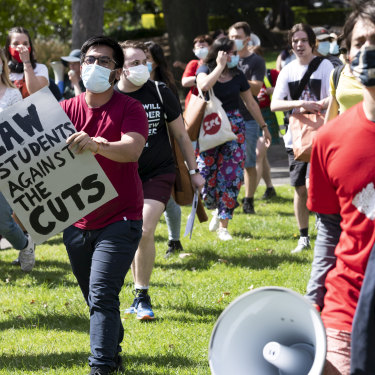 Protesters at the University of Sydney in September 2020.Credit:Rhett Wyman

As efficient as online elections sound, their arrival marks the temporary end of a great creche of Australian politics. A place where generations of politicians in coloured shirts with cheerful slogans like Activate! or Stand Up! learned the sometimes dark art of extracting their peers' votes in the exactly four minutes it takes to walk from the edge of campus to a polling booth.

When Kyol Blakeney, now a teacher, won the SRC presidency in 2014 at the head of a Greens-adjacent coalition after decades of Labor control, he was hailed as a hero by parts of campus. "[Labor] was a machine and if something holds on for that amount of time, it becomes lazy," Blakeney remembers. 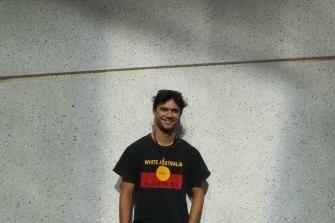 Kyol Blakeney, as SRC president in 2015, the year he was also a Cleo bachelor.Credit:Peter Rae

Now Labor are not even running for that prize, with next year's union bosses and ALP MPs contenting themselves with social media posts asking for votes to sit as SRC councillors.

Shuttered food outlets contribute to campus' relative stillness. Courtyard, the student union's marque venue, has recently opened but the only function it had hosted in the months before that was a wake of sorts for a friend who died far too young. The venue seemed very appropriate.

UniBros, a kebab joint famed on campus but no better than dozens of others that dot Sydney, was one of the few places to stay open throughout most of the downturn. It is hard to know whether the closed shops around it will cut foot traffic and turn the screws on business or the lack of alternatives will provide a boost.

Student revues and theatre too have been paused or tried to create simulacra online.

Campus culture has died many times. The Howard government's decision to make student unionism voluntary cut the amount of money sloshing around undergraduate events. Huge growth in international student enrolments — until their halt this year — paired with scant language support or attempts to bridge cultural barriers created divided campuses. Many students who are too poor or live too far from campus have never had the opportunities to feel a campus connection like Doon or Moore, but this freeze comes on top.

The risk with every closure is that the critical mass that drives students to give up hundreds, sometimes thousands, of unpaid hours to build campus institutions will slacken after a year's break.

"The institutional memory is a maximum of three years so if you lose a year it can have a considerable impact on what is known to occur," says a mate of mine at one of Sydney's sandstone colleges, who doesn't want his name used out of deference to its strict media policy. 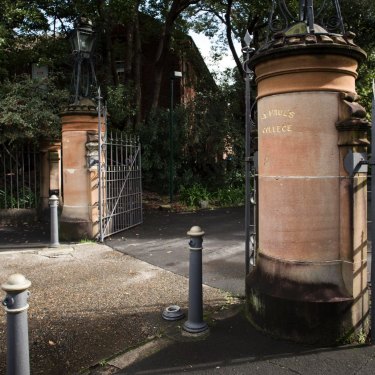 The gates of the expensive and Hogwartian St Paul's College at Sydney University. Credit:Dominic Lorrimer

Moore was planning to be a resident assistant at her La Trobe College next year, the older students who look after newbies and run the rituals that, at their best, bond a group of strangers into a cohesive college.

"I was like, after I cooled down, I'd be happy to take the kids around to other floors and get them engaged with other people and stuff like that," she says. "I thought that'd be fun."

But now, with this year almost a write-off, "it's going to be a whole bunch of first years going back next year," she says.

"We learnt so much of the culture and the things coming up in that first month and apparently there's so much more that we just didn't get to," Moore says. "We've talked about this a lot and we're a bit worried about what's going to happen next year."

Campus life operates almost entirely on intangible currency. Social cachet, a desire to give back, youthful idealism, and CV stacking all prompt students to give up endless time that could be spent studying, working or partying to serve as the treasurer of the rugby club or publications officer of the science society.

Some of those motivations will survive a year off — CV stacking is resilient and often lucrative — but the gap will mean first year students this year won't have had a sense of how good some parts of campus life can be and the attendant desire to replicate them.

Robbie Wardhaugh, who uses gender neutral pronouns, was one of three people selected to direct the University of Sydney Queer Revue, an all-singing, all-dancing, annual sketch comedy show run by students. Wardhaugh talks about it in the same way Moore does college. It was where Wardhaugh had found their tribe after moving down from Newcastle. When the show was unceremoniously cancelled by email along with all other revues by the student union as the coronavirus hit, Wardhaugh hit the floor, distraught.

"I just sat on the pavement and was like: 'I'm going to text for a while and process what we're going to do'," Wardhaugh says. "It was pretty shit."

Like Moore, Wardhaugh isn't sure how the revue will go without a year of young bloods learning how to do lights, run budgets, sell tickets, market a show, write jokes, and on and on. The directors have run Zoom rehearsals, but Robbie is graduating next year. They're pretty confident they won't get to take a bow in front of a packed house. Both understand the lockdowns and don't claim campus life trumps health, but they mourn its loss all the same.

"It makes you realise how thin the fabric of the university experience is, how few things need to disappear before it’s just not there," says my friend Grace Franki.

Franki sat on the student board and still adores the student union far too much, despite having graduated and become a real adult working for a major management consultancy.

"What if I'd arrived five years later?" Franki says. "Who would I be? Who would you be?"