Koalas are ‘functionally extinct’ with just 80,000 left in the wild

Koalas are ‘functionally extinct’ with just 80,000 left in the wild meaning they ‘can’t produce a new generation’

Koala numbers have fallen so low across Australia that the species is now ‘functionally extinct’, animal campaigners believe.

The Australian Koala Foundation said there may be as few as 80,000 of the animals left in the wild, meaning they are unlikely to produce a new generation.

‘Functionally extinct’ describes an animal population which is either so small it has ceased to affect its environment, has no breeding pairs left, or is still breeding but from such a small number of individuals that it succumbs to genetic disease. 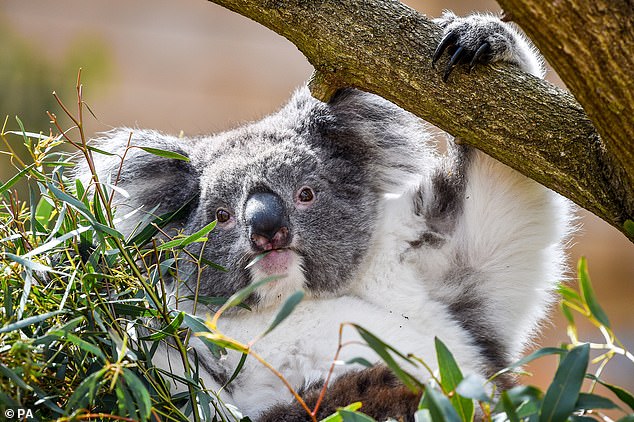 Koalas may be ‘functionally extinct’, activists say, meaning they no longer have an impact on their ecosystem or are breeding from such a small gene pool they are vulnerable to disease

The foundation says that, since 2010, it has monitored 128 Federal electorates that fall within known koala environments, and in 41 there are no koalas left.

While researchers admit that the koala’s tendency to move around and its patchwork habitat make it difficult to track, they say numbers are in steep decline.

Between 1890 and 1927, more than 8million of the animals were shipped to London after being shot for fur.

The biggest threats to koalas are habitat loss and heatwaves caused by climate change, such as the one last year that saw thousands of animals die from dehydration, studies have shown. Habitat loss and heatwaves caused by climate change, including the one that struck Australia last year (pictured), were identified as two of the biggest threats to the animals

Since May 2012, koalas have been officially listed as vulnerable in Queensland, New South Wales and the Australian Capital Territory.

This means their populations are in steep decline or at risk from entering a decline.

While the animals are not listed as vulnerable in Victoria or South Australia, local populations are known to have gone extinct – though the species is relatively abundant elsewhere.

Koala Foundation chairman Deborah Tabart said: ‘I am calling on the new Prime Minister after the May election to enact the Koala Protection Act (KPA) which has been written and ready to go since 2016.

‘The plight of the Koala now falls on his shoulders.’