Lake Powell water levels fall to historic low: Reservoir dips below 1,075meters and is now threatening to no longer have the capacity to generate hydropower

Water levels at Lake Powell have dipped below a critical threshold threatening the source of power that millions of people across seven states rely on for electricity.

Lake Powell’s fall to below 1,075 meters (3,525 feet) puts it at its lowest level since it was filled after the federal government dammed the Colorado River at Glen Canyon in 1963 and threatens to hit ‘deadpool’ – the point at which water likely would fail to flow through the stream – if it drops even more.

The Glen Canyon, which the lake’s main body stretches across, won’t be able to pull the water needed to generate power at 1,064 meters (3,490 feet)  – just 11 meters (35 feet) below the recent record low. 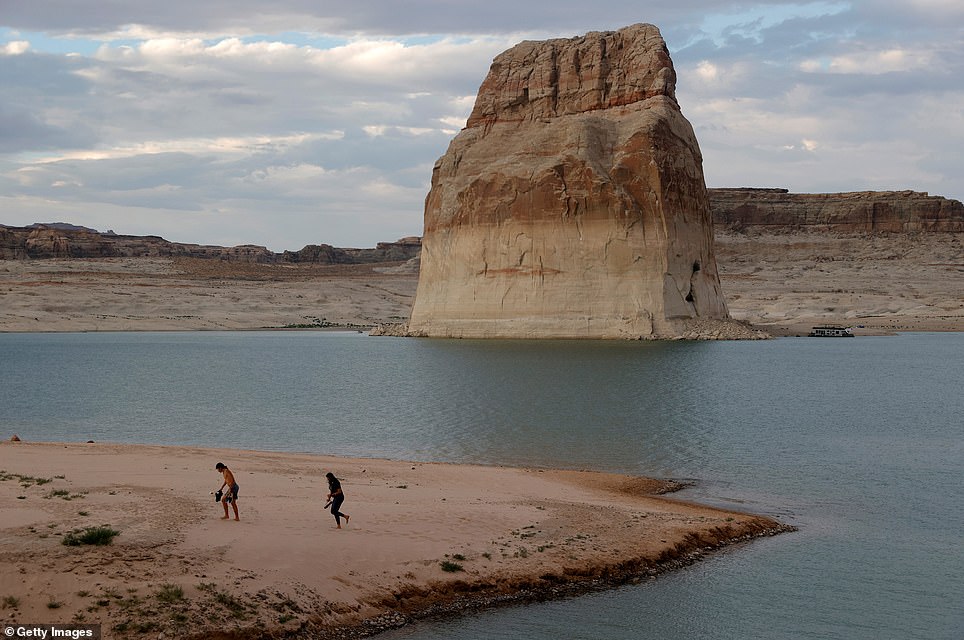 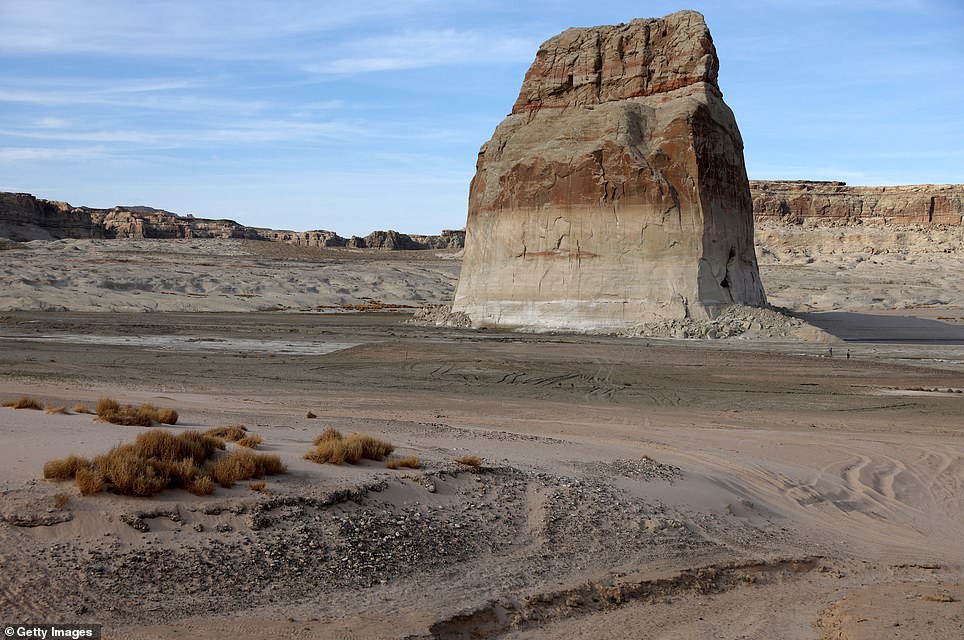 UTAH: Lake Powell’s fall to below 1,075 meters (3,525 feet) puts it at its lowest level since the lake filled after the federal government dammed the Colorado River at Glen Canyon. Pictured left, the lake in 2021 and right, this month

Sitting at the border of Utah and Arizona, Lake Powell is part of a system that supplies water for 40 million people in multiple western states, and through the Glen Canyon Dam, supplies power for more than five million people.

Following a very dry winter, officials are confident water levels will rise in the coming months once snow melts in the Rockies, but warn that more may need to be done to ensure Glen Canyon Dam can keep producing hydropower in the years ahead.

The Bureau of Reclamation’s Acting Commissioner David Palumbo said in a statement earlier this month: ‘This year the Colorado River Basin has experienced extremely variable conditions with a record high snowpack one month, followed by weeks without snow.

‘This variable hydrology and a warmer, drier west have drastically impacted our operations and we are faced with the urgent need to manage in the moment.’ 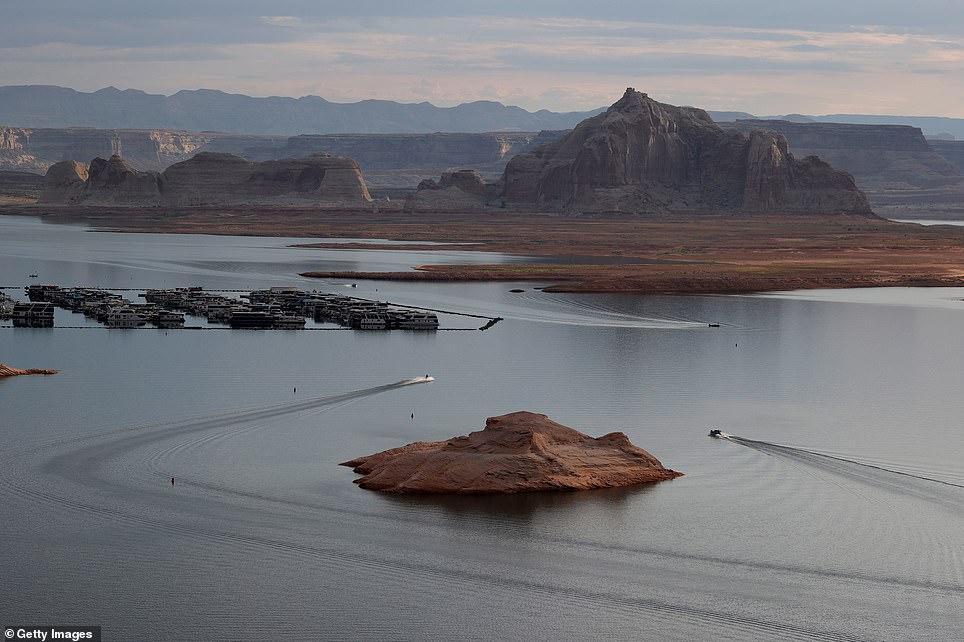 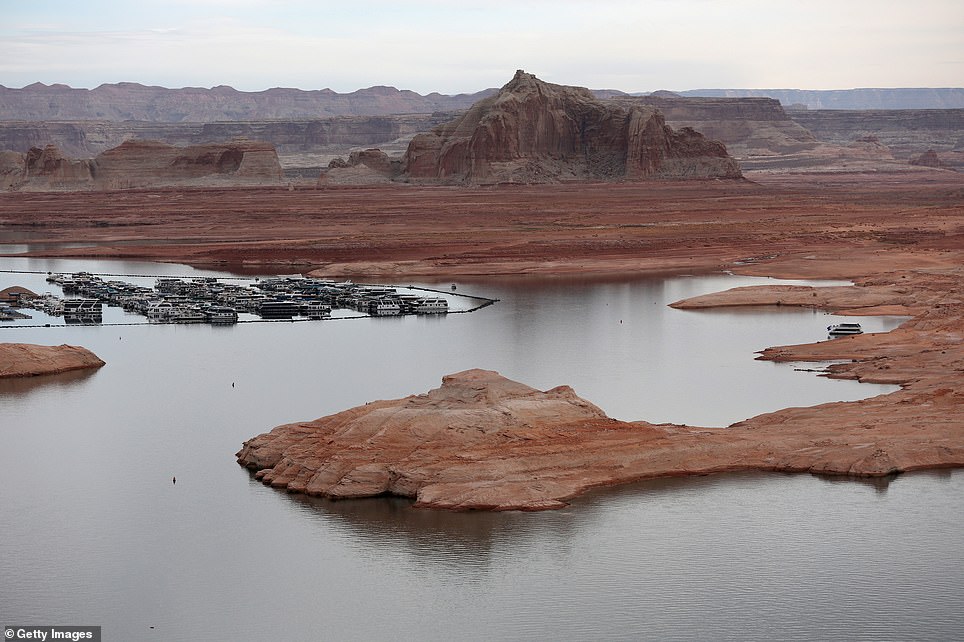 ARIZONA: The Glen Canyon won’t be able to pull the water needed to generate power at 1,064 meters (3,490 feet) – just 11 meters (35 feet) below the recent record low. Left, the lake last June and right, this month 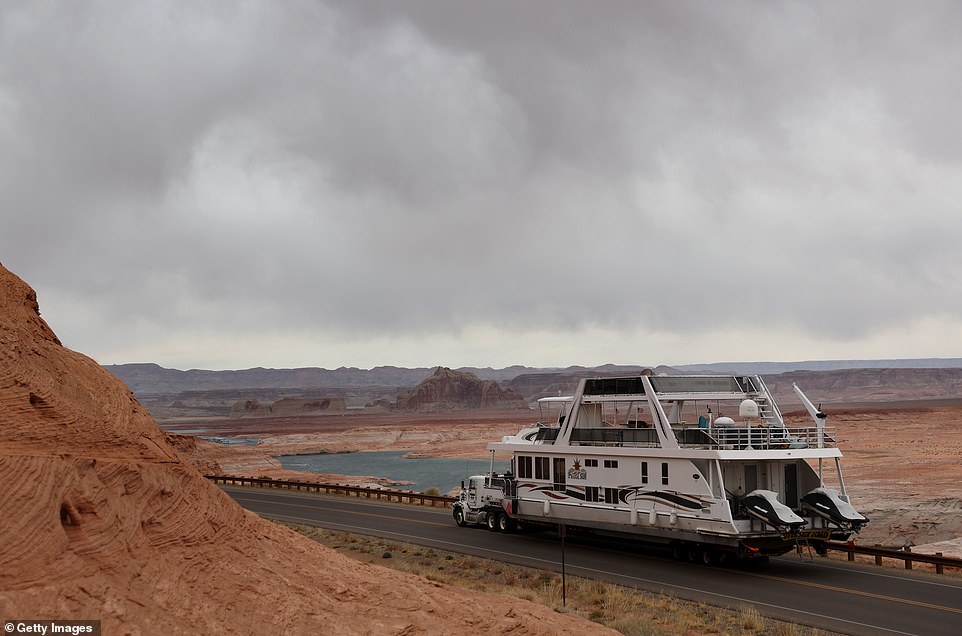 ARIZONA: A truck pulls a house boat by Lake Powell in Page, Arizona this month. As severe drought grips parts of the Western United States, water levels at Lake Powell have dropped to their lowest level since the lake was created 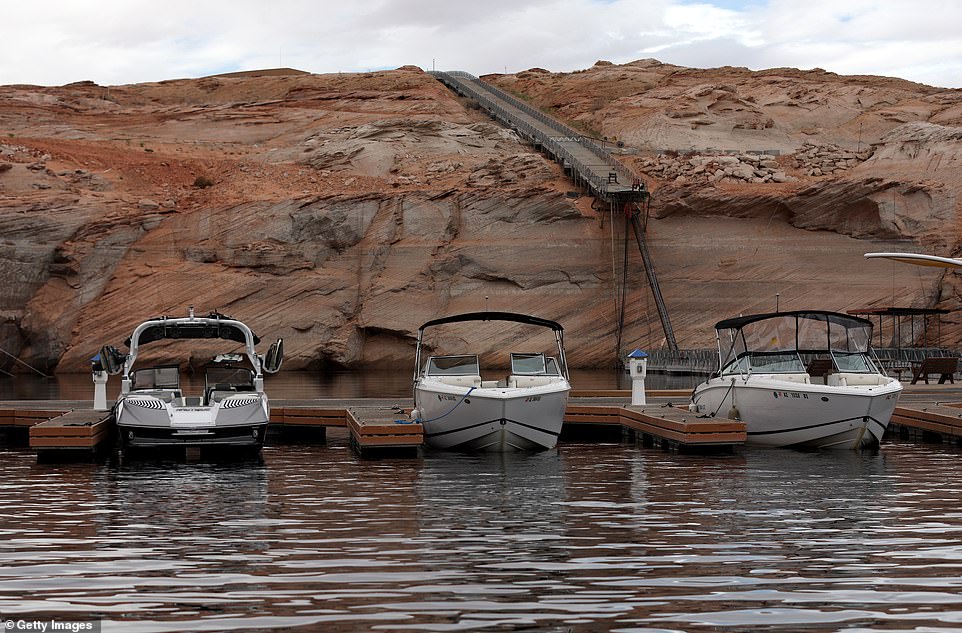 ARIZONA: Boats sit docked near a ramp that falls short of the water at Lake Powell on March 28, 2022 in Page, Arizona. It comes as hotter temperatures and less precipitation leave a smaller amount flowing through the over-tapped Colorado River

Wayne Pullan, regional director for the US Bureau of Reclamation, which manages water and power in more than a dozen states, added: ‘Spring runoff will resolve the deficit in the short term. However, our work is not done.’

It’s the lowest level since Lake Powell reached 1,127 meters (3,700 feet) in the 1980s, and could drop by another two or three feet before April, the Salt Lake Tribune reports.

It comes as hotter temperatures and less precipitation leave a smaller amount flowing through the over-tapped Colorado River.

The government provides it at a cheaper rate than energy sold on the wholesale market, which can be wind, solar, coal or natural gas.

For the cities, rural electric cooperatives and tribes that rely on its hydropower, less water flowing through Glen Canyon Dam can therefore increase total energy costs with customers bearing the brunt of it.

The Navajo Tribal Utility Authority, one of the 50 tribal suppliers that rely on the dam for hydropower, plans to spend $4.5 million on an alternative energy supply this year as its general manager Walter Haase called the issue ‘sensitive for all of us right now’. 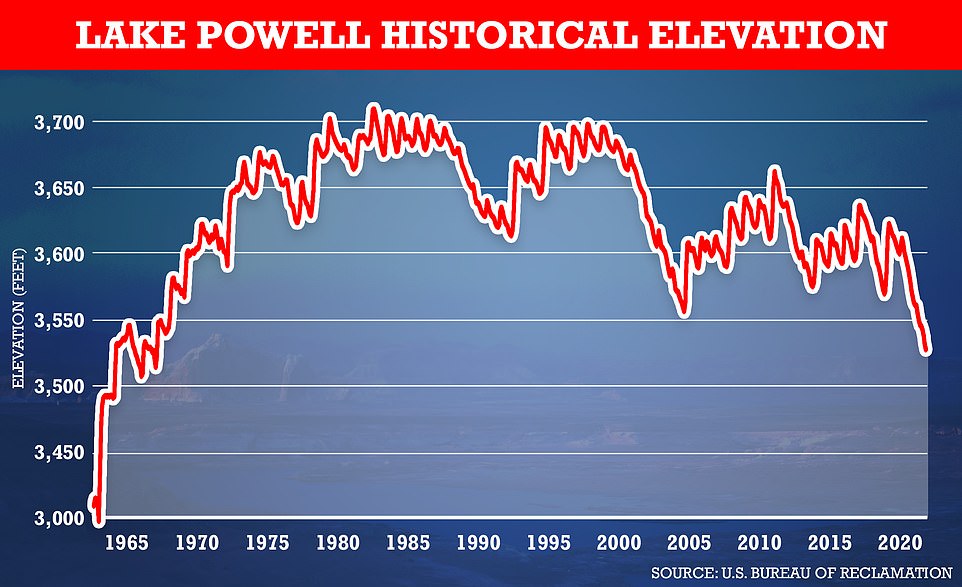 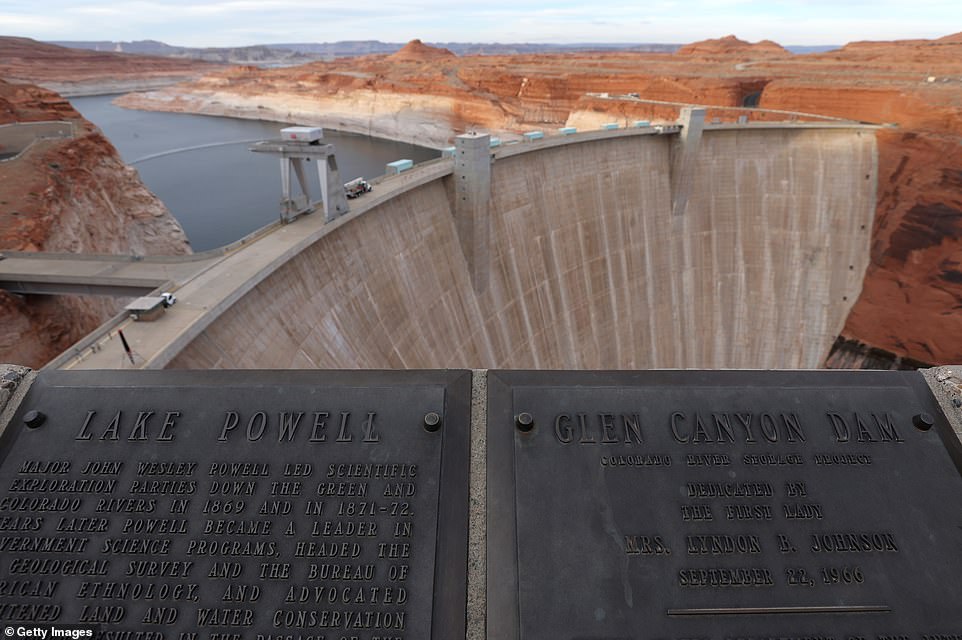 ARIZONA: A view of the Glen Canyon Dam at Lake Powell on March 27, 2022 in Page, Arizona as severe drought grips parts of the Western United States

Though water scarcity is hardly new in the region, hydropower concerns at Glen Canyon Dam in Arizona reflect that a future western states assumed was years away is approaching – and fast.

Arizona, Nevada, California, and Mexico already are taking a combination of mandatory and voluntary cuts tied to the levels of Lake Mead, Lake Powell’s downstream counterpart.

Along with Lake Mead, Powell is the largest reservoir in the country, and crucial to keep water systems on the Colorado River functioning.

‘We clearly weren’t sufficiently prepared for the need to move this quickly,’ added John Fleck, director of the University of New Mexico’s Water Resources Program when the levels reached a record low earlier this month. 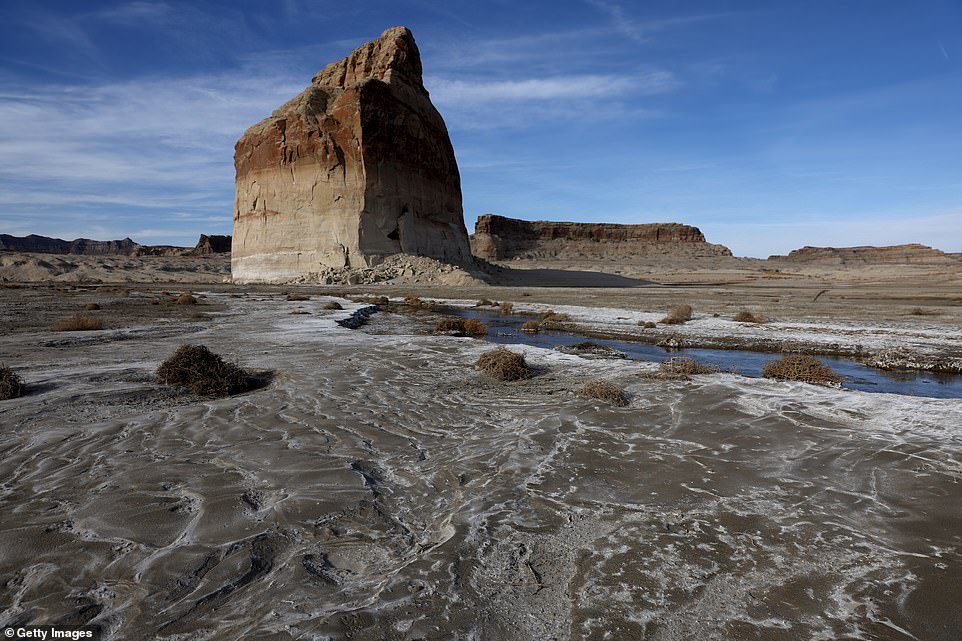 UTAH: Officials are confident water levels (pictured this month) will rise in the coming months once snow melts in the Rockies, but warn that more may need to be done to ensure Glen Canyon Dam can keep producing hydropower 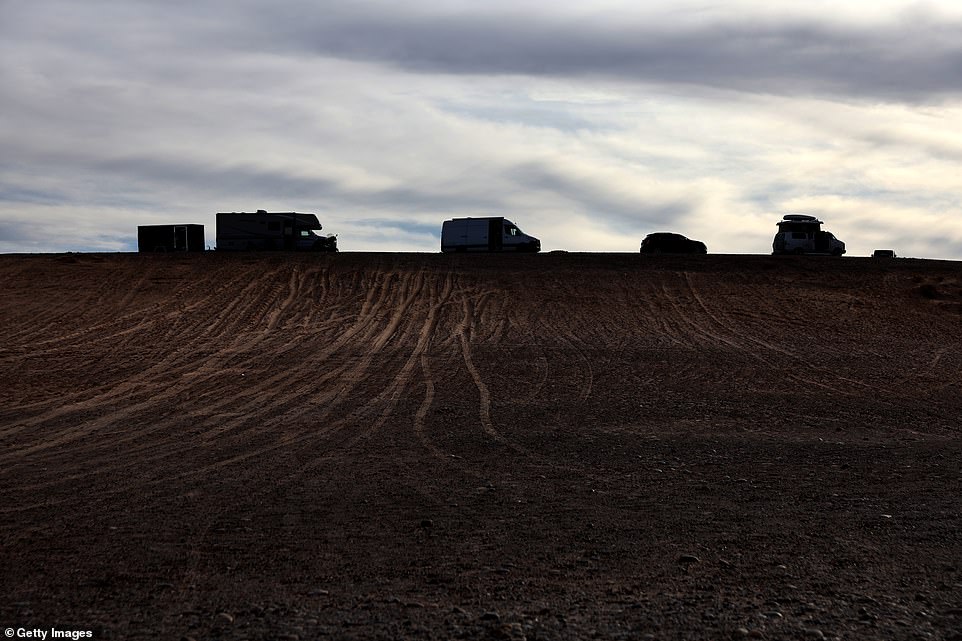 UTAH: Tire tracks are seen in the dirt in an area of Lake Powell that used to be underwater at Lone Rock Beach on March 27, 2022

Though both Lake Powell and Lake Mead, are dropping faster than expected, much of the region’s focus has been on how to deal with water scarcity in Arizona, Nevada and California, not electricity supply.

Last week the Colorado Water Conservation board said it would take a ‘hard pause’ on demand management, a program which would let the state pay users to conserve water.

Considerations of the scheme, aimed at keeping Lake Powell’s supply up, will be halted until ‘the facts change’ or ‘new information’ is available, the board’s chair said, Colorado Sun reports.

Jaclyn Brown added: ‘No more energy spent on this right now. We have to let the other states catch up with their concerns and the issues they see.’ 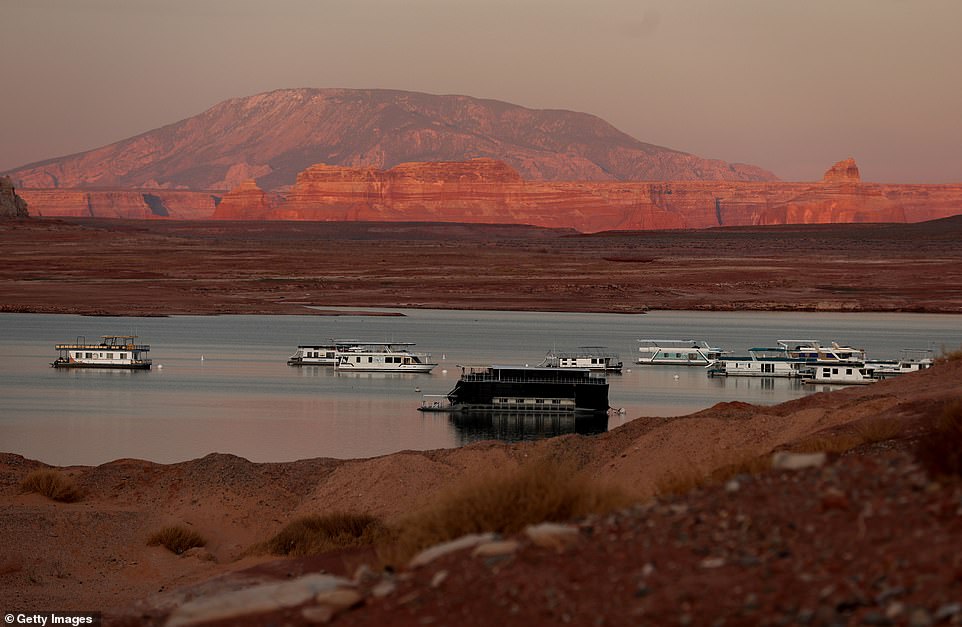 Why have levels at Lake Powell fallen so low

A decades-long drought in the US West is behind the losing streak being felt by Lake Powell.

This is only worsened by the global climate crisis pushing warmers, drier temperatures on the region of the reservoir that largely depends on melted snow.

A growing population has also meant the water is being used to meet increasingly demanding agricultural needs.

KSL.com reports that the lake’s levels this year, compared with the same dates in 2021, show a plunging of 44 feet.

In the past to decades, the lake has dropped to 175 feet below its ‘full pool’.

Along with Lake Mead, Powell is the largest reservoir in the country, and crucial to keep water systems on the Colorado River functioning.

While it is unlikely to stay that low, thanks to Spring runoff, the Glen Canyon Dam needs at least 1,063 meters (3,490 feet) of water to run.

If it goes off, up to 5.8 million homes and businesses could be without electricity.

As well as impacting power supplies, Southern Nevada will be among the worst hit, as 90 per cent of its residents rely on the Colorado River for drinking water.

She added that the CWCB will instead focus on how water users can conserve locally, without relying on neighbor states, saying: ‘What can we do as a state – recognizing that the trend is obviously leaning toward lower hydrology and drier climate – to prepare for this uncertain future that we’re looking at? What can we do right now?’

Bureau of Reclamation officials last summer took an unprecedented step and diverted water from reservoirs in Wyoming, New Mexico, Utah and Colorado in what they called ’emergency releases’ to replenish Lake Powell.

In January, the agency also held back water scheduled to be released through the dam to prevent it from dipping even lower.

The Glen Canyon National Recreation Area is taking advantage of the low levels at Lake Powell to extend boat ramps. Most are now closed or come with warnings to launch at your own risk.

In Page, Arizona, which benefits from recreation at Lake Powell, officials launched a campaign this month to highlight that lower levels aren’t necessarily bad for visitors, noting receding shorelines have revealed sunken boats, canyons and other geographic wonders.

‘You can see some of the old dwellings, and parts of the Old Spanish Trail are accessible now. It’s an opportunity, but it just depends on the person’s frame of mind.’

The record low also comes after a tough year for hydropower. Last year, as US officials worked to expand renewable energy, drought in the West drove a decline in hydropower generation, making it harder for officials to meet demand.

Hydropower accounts for more than one-third of the nation’s utility-scale renewable energy.

Nick Williams, the bureau’s Upper Colorado Basin power manager, said many variables, including precipitation and heat, will determine the extent to which Lake Powell rebounds in the coming months.

Regardless, hydrology modeling suggests there’s roughly a 1 in 4 chance it won’t be able to produce power by 2024.

The megadrought that has been devastating the southwestern United States and parts of Mexico over the last two decades is the worst the region has seen in at least 1,200 years, according to a study.

Researchers analyzed tree ring patterns, which delineate soil moisture levels over periods of time, to conclude that the current megadrought is worse than one that hit the region in the late 1500s and is the most severe since one in 800 AD.

The study, which analyzed a region stretching from southern Montana to northern Mexico and from the Pacific Ocean to the Rocky Mountains, found that human-caused global heating accounts for more than 40% of the severity of the dry spell.

‘The turn-of-the-21st-century drought would not be on a megadrought trajectory without anthropogenic climate change,’ reads the study, led by Park Williams, an associate professor at the University of California in Los Angeles.