Beirut: Lebanon must shut down for two weeks after a surge in coronavirus infections, the caretaker health minister said, as the country reels from the massive Beirut port blast.

The country's health ministry registered a record 456 new infections on Monday, with two deaths, taking the cumulative number of cases to 9337 since February, with 105 fatalities. 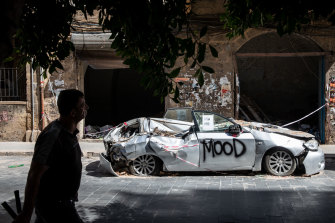 A man walks past a car that was destroyed in the blast it Beirut’s port on August 4.Credit:Getty Images

"We declare today a state of general alert and we need a brave decision to close (the country) for two weeks," Hamad Hassan told Voice of Lebanon radio.

Lebanon, already deep in financial crisis, was struggling with a COVID-19 spike before the August 4 blast that killed at least 178 people, wrecked swathes of the capital and pushed the government to resign.

The warehouse explosion damaged many hospitals and overwhelmed them with more than 6000 wounded. It put about half of 55 medical centres across Beirut out of service, the World Health Organisation (WHO) said last week.

"We are all facing a real challenge and the numbers that were recorded in the last period are shocking," Hassan said. "The matter requires decisive measures." Intensive care beds at state and private hospitals were now full, he added.

Hassan said authorities would not close the country's airport so far, with the rise stemming mostly from within the country.

"The real danger is the spread within society," he said. "Everyone must be on high alert and take the strictest prevention measures."

After the blast uprooted nearly a quarter of a million people, the risk of the virus spreading had grown, the WHO has said.

The British government bowed to public pressure over its school exam grading system, ditching an algorithm that downgraded the results awarded to students in England after their tests were cancelled due to COVID-19.

The government had faced days of criticism after the mathematical model used to assess grade predictions made by teachers lowered those grades for almost 40 per cent of students taking their main school-leaving exams. 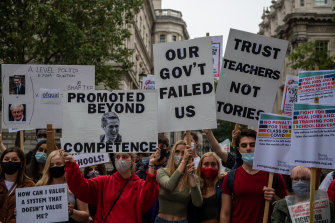 Students will now be awarded the grade that their teachers had predicted for them based on past performance, Prime Minister Boris Johnson’s government said on Monday.

"I am sorry for the distress this has caused young people and their parents, but hope this announcement will now provide the certainty and reassurance they deserve," Education Secretary Gavin Williamson said.

He promised last week there would be no U-turn.

A snap opinion poll by YouGov showed 75 per cent of respondents thought the government had handled the situation badly, and 40 per cent thought Williamson should resign. Some students have been protesting against the initial results.

Asked if he would resign, Williamson said: "I think what those youngsters wanted to see was action being taken."

Spain diagnosed 1833 new coronavirus infections in the past 24 hours, the Health Ministry said on Monday, below Friday's post-lockdown record of 2987 but more than three times the average seen in July.

Daily infection statistics tend to dip on Mondays due to fewer diagnoses taking place on Sunday.

Cumulative cases, which include results from antibody tests on patients who may have already recovered, rose to 359,082, with 32,389 detected in the past seven days, the ministry said.

Since lifting its strict lockdown at the end of June, Spain has struggled to contain a spiralling infection rate, despite mandatory mask-wearing enforced across the country and other restrictions.

The government's most senior coronavirus expert, Fernando Simon, said more testing was part of the reason for the surge.

"We are detecting much of what is out there. I wouldn't say 100 per cent … but between 60 per cent and 70 per cent," he said, adding that the figure was slightly below 10 per cent during the epidemic's March-April peak.

Madrid, Catalonia and the Basque Country have all launched mass screening programs in a bid to identify and isolate asymptomatic carriers of the virus.

South Africa, which imposed one of the world's strictest anti-coronavirus lockdowns five months ago, will significantly relax its restrictions on Tuesday, including allowing the sales of liquor and cigarettes, as it appears the country has weathered its first peak of COVID-19 cases.

With numbers of cases and hospitalisations declining, the country will further loosen its regulations to permit the opening of bars, restaurants, gyms, places of worship and entertainment, all with distancing restrictions. Schools will reopen gradually from August 24, starting with grades 12 and 7 and a phased opening of other grades.

"This will come as a relief to all South Africans who have had to live under stringent restrictions for the last five months," said President Cyril Ramaphosa on Monday in his weekly letter to the nation.

"It is a sign of the progress we are making in reducing new infections and demand on our health facilities. It is also a very important development as we strive to restart our economy," wrote Ramaphosa.

With more than 580,000 confirmed cases, South Africa has more than half of all reported cases in Africa. The 54 countries of the continent reported a total of more than 1.1 million cases on Monday, according to the Africa Centres for Disease Control and Prevention.

South Africa has recorded more than 11,800 deaths from COVID-19, while overall the continent has reported just over 25,600 deaths. The actual numbers of cases and deaths are estimated to be much higher, say health experts.