‘Like the only person left on the world’: When will the MCG fire back to life?

There have been no games here since July 5. No crowds since the women's cricket World Cup final on March 8 – back when the thought of a night grand final in Brisbane was too absurd for even the most deranged Queensland fan.

But it is no less magnificent. Even with gathering dust in the concourses and cobwebs under seats, the MCG still feels spiritual, energised, like an empty cathedral: a place of echoes and latent miracles. 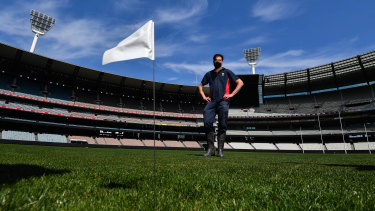 Michael Salvatore on the centre of the MCG. Credit:Joe Armao

The playing surface, for what it's worth, has never looked better for the absence of studs and sliding knees.

The cricket pitches, kept in the outdoor nursery at Yarra Park, are in "great condition".

And while there will be no grand final at the MCG on Saturday, Melbourne's falling COVID-19 cases may give us hope for the summer.

"At a stretch, we only need two weeks and we’re confident we’d get a great Boxing Day wicket."

Before any return of crowds, the MCG will need what could be the most thorough clean in its 150-year history.

Each of the 100,000 seats will need to be scrubbed of dust and grime. Pressure-cleaners will be called in to blast away rows of bird droppings, while specialists will need to check 1500 TVs and screens. 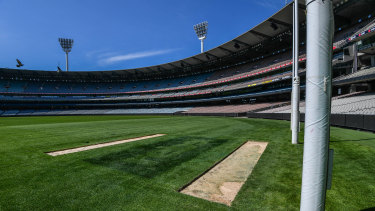 Two strips of turf, now at the Gabba, will be embedded at the front of each player race for the AFL grand final. Credit:Joe Armao

Then there are the electronics and sound system; the new state-of-the-art lights; toilets, walkways and dozens of kitchens.

"As we’re a year-round venue, some of these things have never been switched off so it will be an extensive process to test everything," says Peter Wearne, the Melbourne Cricket Club's ground manager.

"The MCG is the people’s ground and it’s not been the same without our members and sporting fans, so we want to make sure it sparkles when the time is right to reopen our gates."

Saturday will be only the sixth time since 1902 a grand final has been played elsewhere and the first time beyond Melbourne.

In 1991, the grand final was played at Waverley Park because of construction work on the MCG's now-mighty Southern Stand.

In more recognisable times, Mr Salvatore and his team would spend the Sunday of grand final week, before the ground is overtaken by rehearsals and training, hastily marking lines and aerating the turf.

Mowers with heavy rollers would be folding blades of grass, each with a dull and shiny side, into the "nice and bright" distinctive diagonal pattern reserved for finals. Signwriters would be painting team logos.

In pandemic-era Melbourne, with many of his staff on reduced hours or working from home, Mr Salvatore is sometimes all there is.

"I’ve had days in here when I was watering and an A380 has been flying across and, honestly, you just feel like you’re the only person left on the world," he says.

"I think [the absence of games and crowds] just makes you appreciate the place even more.

"It’s an iconic stadium and it means so much to Victorians and it will be good to get her back up and running, whenever that is."

Last week, two strips of goal square turf from the Ponsford Stand end were removed and sent via truck to Queensland – one for each race – so the players will, in a sense, run out onto a slice of the MCG.

"Brisbane have done a great job and they deserve it, but at the same time it will be a little bit disappointing," Mr Salvatore says. "I think the grand final belongs here. But it’s great we’ve got a little bit of turf going up there so she can still be part of it in a little way, which I think is fitting."