Looking into infinity is now so close

About 200 years ago, William Blake wrote:

To see a World in a Grain of Sand
And a Heaven in a Wild Flower
Hold Infinity in the palm of your hand
And Eternity in an hour. 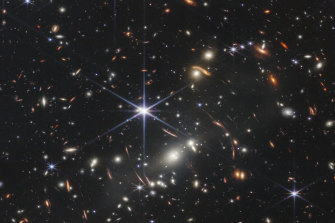 Suddenly, two centuries is but the wink of an eye. These past days I have been, if not holding infinity in my hand, zooming in and out of the closest thing humankind has come to it – an image of the universe from 13 billion years ago.

It is not far from here – all things being relative – to the Big Bang, says NASA, who with the aid of the European Space Agency and Canadian Space Agency revealed images last week from its James Webb Space Telescope of the deepest pictures taken of time and space in the universe.

The moon landing seems so very far away. I don’t know of course if infinity goes beyond the Big Bang. Maybe it’s the first and last station. Maybe it’s Schrodinger’s cat. Maybe beyond the Big Bang there’s a bigger bang. But the flares of light were at once wondrous and beyond awe. How to absorb their meaning of light?

The Blakeian vision of a world in a grain of sand was, it turned out, too modest by several thousand galaxies. NASA says the telescope’s view of the thousands of galaxies out there is a sliver of the universe – about “the size of a grain of sand held at arm’s length by someone on the ground”.

So what does that make you and me against this horizon? Insignificant is too little a word. There’s solace, though, in that each of us holds a world with its own gravitational pulls, pulses and pulsars, its dark matter. It’s our own private universe which we create both in a reactionary way and on a whim.

Bob Dylan titled one of his latest songs I Contain Multitudes.

Looking into the cosmos of 13 billion years ago has two effects. One is to inspire awe in this vast indifference of heaven (to quote Warren Zevon) and the other is to appreciate the multitudes within the soul, one of which is the capacity to have faith.

Some will say this is a blessing; others call it a curse. But on this speck of life, this dot, a creature has developed a survival mechanism and called it belief. Beauty comes from it and so too barbarism. Our universe is not all or nothing. It has points of light and pools of darkness.

Of cosmic knowledge, NASA says this: “More is unknown than is known. We know how much dark energy there is because we know how it affects the universe’s expansion. Other than that, it is a complete mystery. But it is an important mystery.

In the face of such a minuscule ratio and immensity of time, how much space does a smile take up in the universe? How much that hand of kindness, those words of love?

Why, it’s obvious. Everything.

So I look at images that have taken 13 billion years to travel to me, and hum some Joni Mitchell: “We are stardust/billion-year-old carbon.”