Lorraine Kelly reveals the REAL reason for her ‘feud’ with Esther McVey: Presenter hits back at ‘ex-GMTV rival’ saying she ‘strongly disagrees’ with Tory MP on LGBT rights and is ‘sick to the back teeth of the toxic political atmosphere’

Lorraine Kelly defended herself in her ‘feud’ with Esther McVey today, rubbishing claims the politician was promoted above her and slamming her views on LGBT rights.

The presenter hit back at the Tory leadership hopeful’s claims their awkward TV exchange was down to her getting to co-host GMTV with Eamonn Holmes in the 1990s.

She said she can’t remember ever interacting with the now-Tory MP because lots of people were put in the same dressing room – while she had a separate show.

When probed on why she appeared stone-faced on Good Morning Britain yesterday, she admitted being ‘sick to the back teeth of the toxic political atmosphere’ and strongly disagreeing with McVey on the issue of LGBT rights.

After GMB’s Piers Morgan joked that the bad blood was all down to Lorraine ‘losing a love battle with Eamonn Holmes’, Lorraine set the record straight.

The daytime TV star shook her head and looked shocked as she watched a clip of the Tory leadership hopeful telling a press conference that the pair used to share a dressing room.

She said: ‘There is no battle! I’m baffled [by what McVey said]. I have had my own show since 1992 and I don’t think she joined until five years later.

‘As far as dressing rooms go… It was just a little room that everyone shared and we got ready in.

‘It wasn’t a dressing room with couches – it wasn’t palatial at all.’

Prodding her further, Lorraine said, exasperated: ‘I’ll be genuinely honest with you, I don’t remember, It was such a long time ago. I had my own show so there was no interaction.

‘Yesterday I just got sick to the back teeth of the whole toxic political atmosphere. I strongly disagree with her on LGBT rights.

‘And they’ve been going round in circles on Brexit for two years and it’s got to stop.’

She added in a nod to the Scottish Conservative leader’s appearance on this morning’s GMB: ‘I’m really disappointed that Ruth Davidson is not standing. She’s one of the few human beings in politics right now.’ 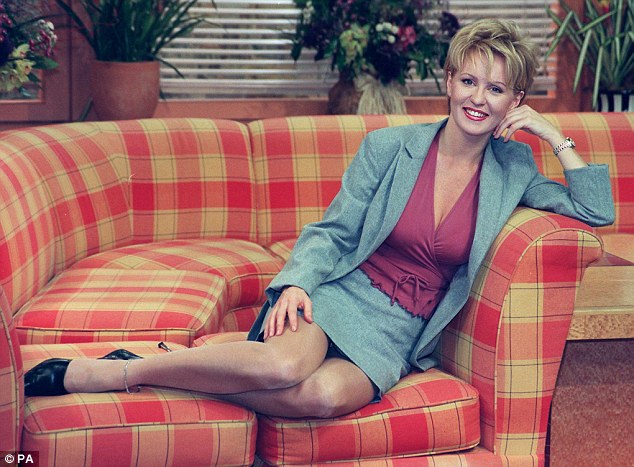 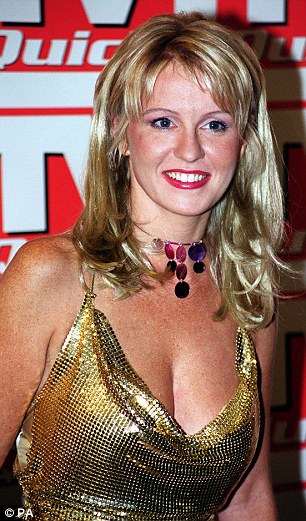 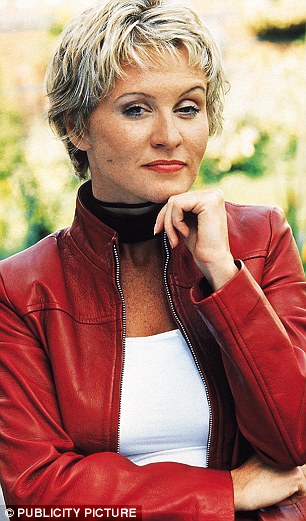 McVey, 51, (pictured in her earlier days) worked as a TV host for several years before she got into politics, including a year-long stint as a co-presenter on GMTV 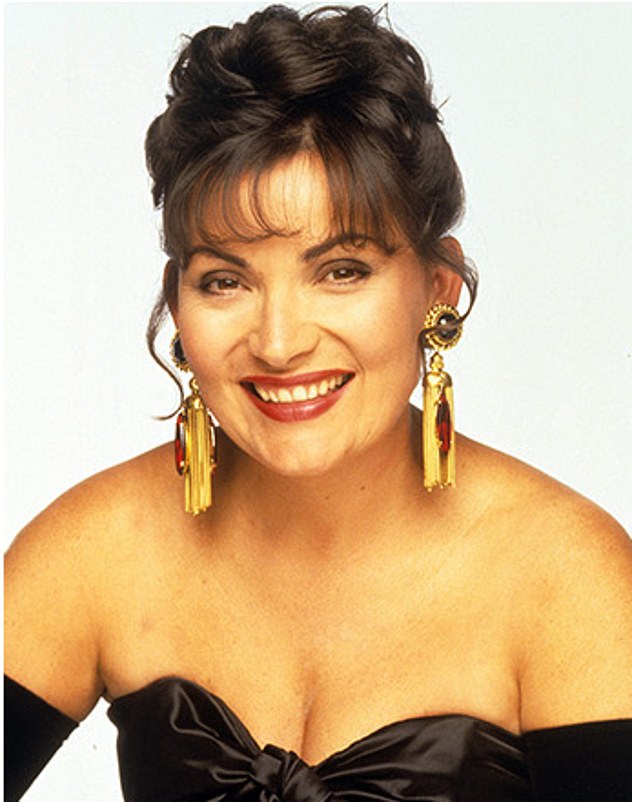 Back in the day: Lorraine is pictured during her time on GMTV, where she worked alongside McVey for a year in 1999

A source close to Lorraine told The Times the tension between them is down to her voting record on same-sex marriage.

While McVey voted against it in parliament, Kelly has been branded an ‘honourary gay’ by Attitude Magazine and was given an award for her support of the LGBT community at their 2015 award ceremony.

Speaking at the press conference for her leadership launch, broadcast on ITV News yesterday, McVey said her promotion to flank Holmes on the show irked Lorraine.

The now Tory MP co-hosted the show while Fiona Phillips was on maternity leave in 1999.

The comments come after the pair’s awkward encounter on Good Morning Britain this morning when Lorraine appeared to snub her former colleague.

McVey was grilled by GMB hosts Piers Morgan and Susanna Reid on her party’s recent drug confessions, Brexit, abortion rights and much more when she went on the show this morning.

After the interview GMB cut live to the Lorraine studio where Piers asked host Lorraine Kelly whether she remembered McVey from the days they both worked at ITV.

Lorraine gave a short ‘Yep. Yes I do,’ before quickly launching into a plug for her show.

There was an awkward laugh in both studios before Piers added: ‘Ooh if looks could kill.’

McVey worked as a TV host for several years before she got into politics, including a year-long stint as a co-presenter on GMTV.

Lorraine helped launch the show in 1993 and had her own spot before she got her own programmes Lorraine, Live, LK Today and Lorraine. The pair never presented together.

McVey served as maternity cover for regular host Fiona Philips and worked alongside Kelly on the show.

Viewers quickly took to social media to comment on the awkward exchange and apparent ‘beef’ between the ex-colleagues.

One person branded it ‘the most brutal thing I’ve ever witnessed’, while another said Lorraine ‘clearly isn’t a fan’ of the former Work and Pensions Secretary. 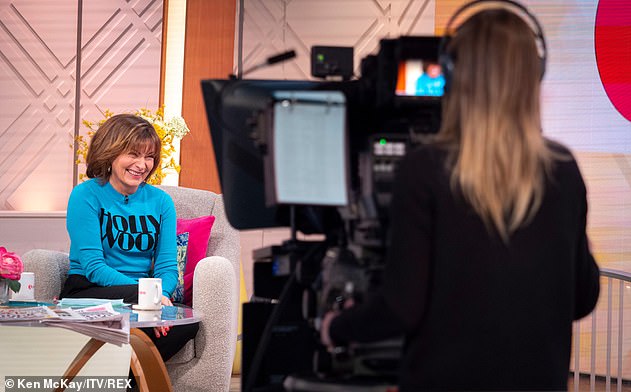 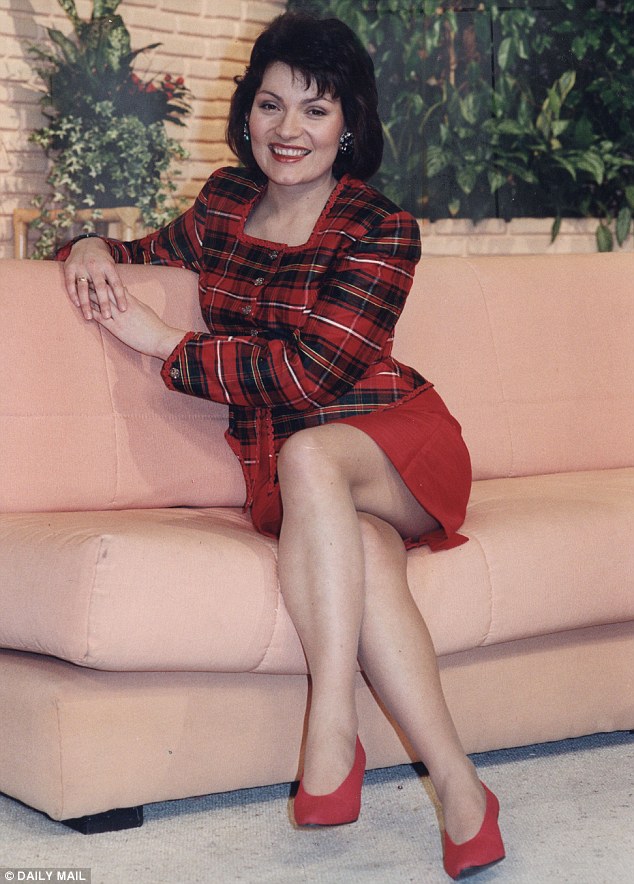 Lorraine is pictured on the GMTV sofa. She went on to have several of her own shows

McVey made no mention of the encounter on Twitter after the show, posting only to confirm she had submitted her nomination for the Conservative Party leadership race.

It was McVey’s second snub of the day. She had her ‘Scouse privileges’ revoked by Liverpool Mayor Joe Anderson.

The Labour Mayor has written to all Tory MPs asking them not to back the former Work and Pensions Secretary. He tweeted a mock up of Ms Mcvey’s ‘Scouse privileges’ card – with a large ‘revoked’ stamp across it.

‘Tory austerity has had a terrible effect on Liverpool. This city stands for community, fairness & justice. At DWP & as Tory Party Leader hopeful, Ester McVey’s record flies in face of that proud tradition. Scousers don’t do that to Scousers,’ he said.

Lorraine, 59, dodged a huge tax bill earlier this year when a judge ruled she works on a freelance basis for ITV because her ‘Lorraine persona’ is just a front.

But she argued national insurance shouldn’t have been deducted from her income under the PAYE system.

She said she had been ‘freelance’ since 1992 and had since then worked for the BBC, Channel 4, Scottish TV, Sky and ITV, also writing weekly columns for the Sun newspaper. 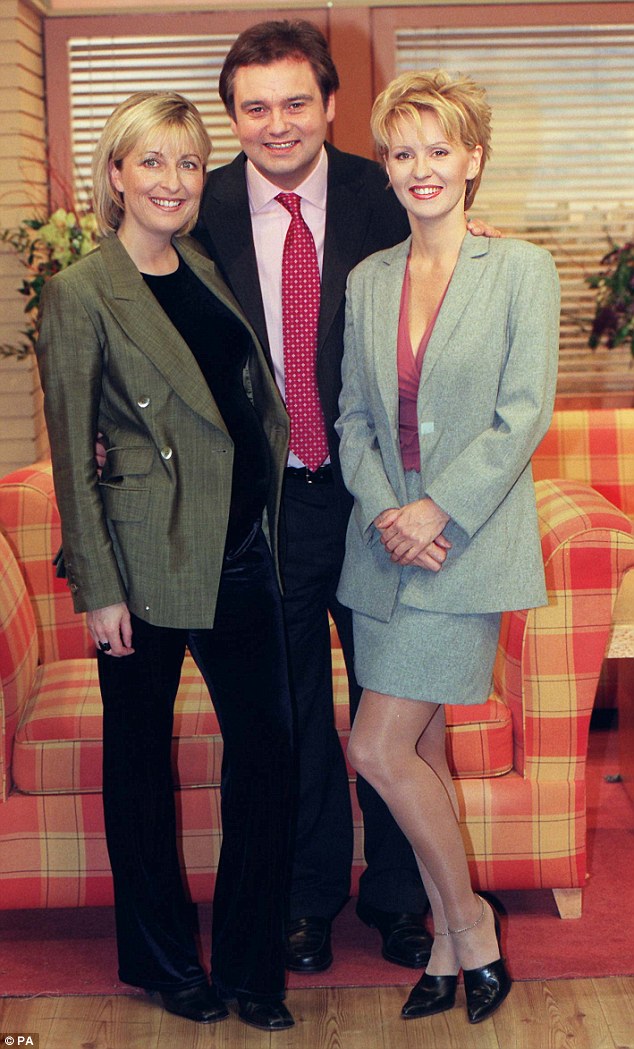 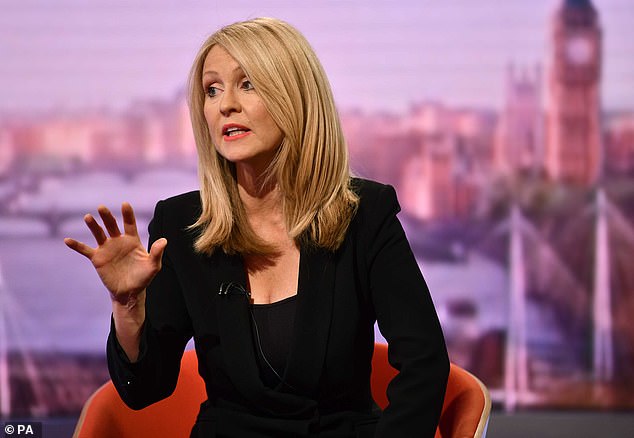 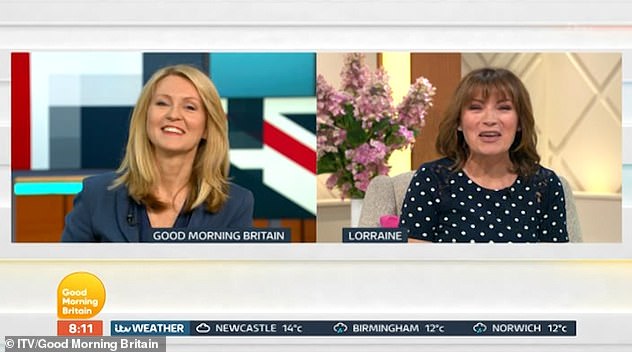 After Esther McVey’s interview (she is pictured today, left), GMB cut live to the Lorraine studio where Piers asked host Lorraine Kelly (right) on whether she remembered McVey from the days they both worked at ITV