Mafia accused of running courthouse cafe to eavesdrop on judiciary

Rome: As a means of keeping tabs on their adversaries in the police and judiciary, it could hardly have been bettered – or more brazen.

An investigation in Italy has found that the mafia controlled a bar inside a courthouse in the southern city of Potenza, the capital of the southern Basilicata region.

As prosecutors and police officers sipped their cappuccini and tucked into cornetti (croissants), they were unknowingly being watched and overheard. 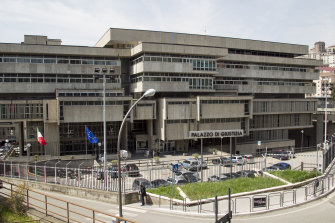 The Potenza Courthouse in Italy.Credit:Getty Images

In a covert operation, investigators set up hidden cameras and listening devices, catching the staff of the bar-café bowing in respect to local mafia bosses when they appeared for court hearings.

Italy’s various mafia networks are known to launder the proceeds of drugs and extortion by buying up restaurants and hotels, but owning a business inside the justice system is thought to be without precedent.

Running the bar enabled local mobsters to listen in on the conversations of lawyers, magistrates, judges and police, gleaning information about ongoing investigations.

Managing the bar was a “striking demonstration” of the local mafia’s influence in the region and “at the same time guaranteed them a privileged observation point inside a crucial part of the legal system,” said Francesco Curcio, a district prosecutor. 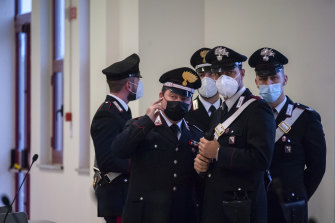 The investigation has revealed the “endemic penetration of the institutional and business world of Potenza, to the extent that they were able […] to manage the bar-cafeteria inside the Palace of Justice.”

It had revealed that “evidently something was not working in terms of anti-mafia checks,” he said with some understatement.

The local mafia managed to get hold of the bar after allegedly using threats to ward off a businessman who was hoping to take it over in 2018, the investigation found.

The bar was closed down by the police and 17 arrest warrants were issued, the culmination of a two-year-long operation code-named Iceberg.

The arrests included members of the Riviezzi family, who allegedly wielded influence in and around Potenza. They have denied any wrongdoing or mafia association.

“They were able to influence the public administration, with the typical mafia tactics of fear and intimidation,” said the prosecutor.

The family allegedly has strong links with mafia clans in Calabria, which is controlled by the ’Ndrangheta organised crime network, as well as in Campania around Naples, where the Camorra holds sway.

Basilicata adjoins Calabria, where the biggest “maxi trial” for decades is underway, targeting clans belonging to the ’Ndrangheta, which is believed to make €50 billion ($77 billion) a year from importing cocaine from South America to Europe.