London: A man was arrested on suspicion of common assault after an egg was believed to have been thrown in the direction of Britain’s King Charles during a walkabout, PA Media reported.

The alleged assault took place on Tuesday (UK time) while Charles, 74, who came to the throne in September after the death of his mother Queen Elizabeth, was visiting Luton, northwest of London. 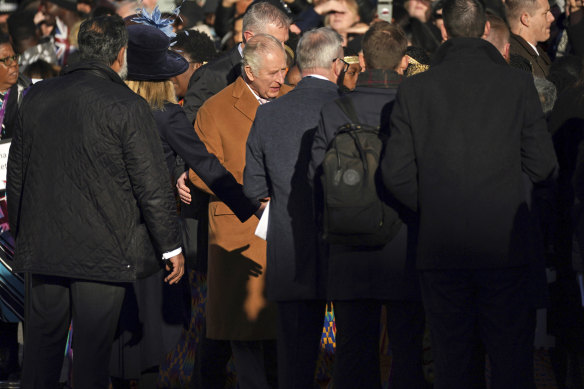 Close-protection officers usher Britain’s King Charles III out of the way as he was meeting members of the public during a visit to Luton.Credit:AP

A police spokesperson confirmed a man in his 20s had been arrested in Luton’s St George’s Square and was in custody for questioning.

Last month, a man was detained by police after eggs were thrown at Charles and Camilla, his wife and the queen consort, as they carried out an engagement in northern England.

The latest incident comes as the royal family braces itself for the release of a Netflix documentary series on Thursday about the king’s younger son Prince Harry and his wife Meghan, and their latest expected criticism of the royal household.

It also comes a week after the royals became embroiled in a new race row involving the godmother of Prince William, Charles’s eldest son, who left her honorary role after making “unacceptable” comments about race and nationality to a guest at a Buckingham Palace function.

Egg protests are not a new occurrence for the royals: eggs were thrown at Elizabeth’s royal car in 2002 when she visited Nottingham, central England, and anti-British protesters threw eggs at Charles during a walkabout in central Dublin in 1995.