Man, 25, was found dead on sofa hours after friends poured beach over his head in a drunken prank, inquest hears 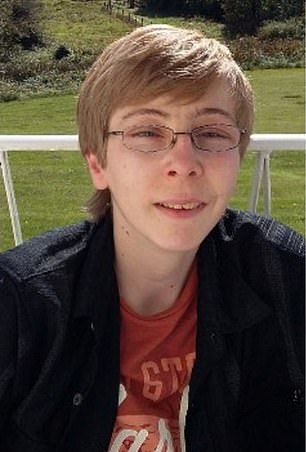 A vulnerable man was found dead on a sofa hours after friends poured bleach over his head in a drunken prank, an inquest heard.

Martyn Evans, 25, spent the night before he died drinking ‘heavily’ with four friends – who then decided to have ‘a bit of fun’ at his expense.

The two men and two women then filmed their ‘appalling’ treatment of Mr Evans, including trying to shave his eyebrows.

They poured bleach and washing-up liquid on his head – and put a banana up his nostril.

An inquest at Avon Coroner’s Court heard Mr Evans was more intoxicated than the rest of the group, and was ‘clearly out of it’ on the sofa as the antics went on.

After attempting to wash some of the bleach out of Mr Evan’s hair, the group then carried him back to the sofa to sleep – and found him dead there just hours later.

The four people involved – aged between 25 and 30 – pleaded guilty at Bristol Crown Court in August this year to assault occasioning actual bodily harm.

They were each handed an 18-month community order, with rehabilitation. But their ‘bullying’ actions were not linked to Mr Evans’ death.

Coroner Dr Peter Harrowing recorded a short narrative conclusion at the inquest – stating that he was unable to determine how the young man came by his death.

The inquest heard that Mr Evans, who lived in Withywood, Bristol, had a long history of learning and developmental difficulties.

On October 20, 2018, the night before his death, he had gone with two friends to the home of another two of their friends in Highridge, Bristol, for an evening of drinking.

According to one female member of the group, who claimed she was not drinking that night, Mr Evans and the other three drank around 80 cans between them, the inquest heard.

When paramedics from South-West Ambulance Service were called to the address in Highridge shortly after 9.15am the following morning, they found him in a state of rigor mortis on the sofa.

Paramedic Gareth Harper, the first to attend the scene, described Mr Evans as pale and cold to touch, with vomit on the upper part of his trousers.

Mr Harper said he spoke to Mr Evans’ friend who lived in the house, who seemed ‘visibly distressed and very shaken’.

The man explained that Mr Evans had come round the night before with another friend and that he had been drinking Stella Artois beer throughout the night.

He told Mr Harper he was not sure how much Mr Evans had consumed, but he was drunk, and at 4.00am, the man had helped him to the sofa to sleep, the inquest heard. 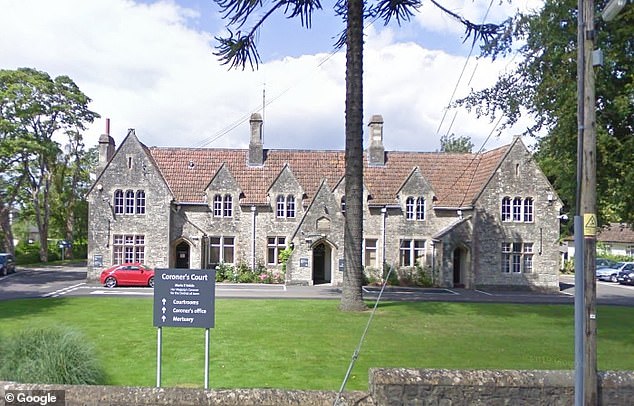 He said that he next saw him when he walked into the sitting room at 9.15am and found him dead.

The inquest heard that PC Matthew Stanford and Sergeant Lisa Colton, of Avon and Somerset Police, then attended the scene shortly after 10am, and were met by the man and woman who lived in the house.

The two officers entered the sitting room and saw Mr Evans on his back on the sofa, covered with a white duvet, and with vomit stains on his upper jeans, the neckline of his t-shirt, and the soles of his socks.

PC Stanford and Sergeant Colton searched a black bag belonging to Mr Evans for ID, and spoke to the four friends involved about his next of kin.

They then concluded that the death was a tragic accident, and that he could have choked on his own vomit after being left to sleep on his back whilst extremely drunk, the inquest heard.

But, a few days later, Avon and Somerset Police received information from a neighbour of two of Mr Evans’ friends that they had ‘terrorised’ him prior to his death.

Giving evidence at the inquest, DC Gary Snailum said: ‘On October 23 we received information from a neighbour of two of the group.

‘They had disclosed to this neighbour that they had terrorised the 25-year-old, shaving his eyebrows and pouring bleach and washing-up liquid over his head.

‘Martyn had been invited to go to a friends house for drinking and a social evening, and the group met up there.

‘Accounts came from two of the group in a later police interview that, in their view, Martyn was worse than the others in his intoxication.

‘He was on the sofa and clearly out of it, and they decided to have fun at his expense, and film what they were doing to Martyn.

‘They admitted trying to shave his eyebrows, and pouring washing-up liquid and bleach over his head and hair – all of which took place while Martyn was on the sofa. They also put a banana into his nostrils and in his mouth.’

DC Snailum continued: ‘At one point, one of the girls in the group said they should wash the bleach off his head. The two men carried Martyn head-first from the living room towards the bathroom.

‘The hallway floor was wet from having been mopped when drink was spilled, and the two men slid and dropped Martyn. It is believed that the left side of his head may have hit the floor.

‘Martyn then had his hair dried with a towel, and was taken back to the sofa in the lounge, where the tomfoolery continued,’ DC Snailum said.

The first photo of Mr Evans was taken at 1.45am, and the final time he was seen alive on video was at 4.57am, when he can be seen sitting up and removing his jumper, the inquest heard.

DC Snailum said that two of Mr Evans’ friends left to go home at 5.30am, at which point they claimed he was making a ‘deathly snoring noise’.

One of them allegedly wanted to get some medical help for him – but another said to let him sleep it off, and left him on the sofa, the coroner’s court heard.

A detailed post-mortem examination by forensic pathologist Dr Deborah Cook heard that he had 255mg per 100ml of blood in his system at the time of his death – just over three times the legal drink-driving limit.

But Dr Cook said that this would not have been a sufficient amount for the alcohol toxicity on its own to kill Mr Evans.

She also said that there were no fatty changes in his liver due to excessive alcohol consumption, and that his heart and brain were normal.

Dr Cook also ruled out the bleach as his cause of death, saying there was nothing in his internal examination to suggest he had ingested or inhaled any significant quantity of bleach.

There were patches of redness in areas of his scalp, and flakes were coming off from those areas – but there was no suggestion of deeper injury under these area, she said. A toxicology report showed no signs of drugs in his system.

Dr Cook concluded her report by saying: ‘I don’t think I can give a cause of death in this case.’

Concluding the inquest, Dr Harrowing recorded the medical cause of death as ‘unascertained’.

He said: ‘Whilst an unusual situation, Martyn’s case is sadly not unique in that Dr Cook was not able to identify a medical cause of death.’

He gave a short narrative conclusion, saying: ‘The deceased was pronounced dead at the home address of some acquaintances. How he came by his death cannot be determined.’

But the coroner added: ‘I find the behaviour of these four individuals towards Martyn, a vulnerable man, to be appalling.’

Speaking after the inquest, Mr Evans’ mother, Alita Evans – who adopted him when he was seven months old – described him as ‘fun-loving’ and ‘good company’, with ‘a good sense of humour’.

She said: ‘He was a good member of the community, and wanted to be friends with everyone.

‘He was always here to help me whenever I needed help. I miss him dreadfully. It’s been a long year. He’s left a big void to fill.’