Immigration centre is a ‘pressure cooker’: Manston site for 1,600 migrants has been housing more than 4,000… and 700 more were bussed in after Dover petrol bomb attack

Concerns are growing over dangerous and overcrowded conditions at a migrant processing centre in Kent where more than 4,000 people are being housed in a site designed for 1,600.

Have you seen conditions inside Manston?

Unions have warned the facility in Manston is ‘like a pressure cooker’, with cases of diphtheria and outbreaks of violence.

Overcrowding at the former RAF airfield has worsened after 700 more migrants were taken to the centre from another site in Dover which was attacked on Sunday by a man hurling petrol bombs.

Sir Roger Gale, a local Conservative MP, described the situation at Manston as a ‘breach of humane conditions’ and accused ministers of deliberately fuelling overcrowding.

‘There are simply far too many people and this situation should never have been allowed to develop, and I’m not sure that it hasn’t almost been developed deliberately,’ he told BBC Radio 4’s Today programme.

Migrants who have crossed the Channel in small boats arrive at the Dover centre before being taken to the Manston for processing.

They are meant to stay there for a maximum of 24 hours while they undergo checks before being moved into immigration detention centres or asylum accommodation such as hotels.

But Home Secretary Suella Braverman was said to have blocked the transfer of migrants from the centre amid the soaring cost of housing them in hotels, which is around £6million per day. 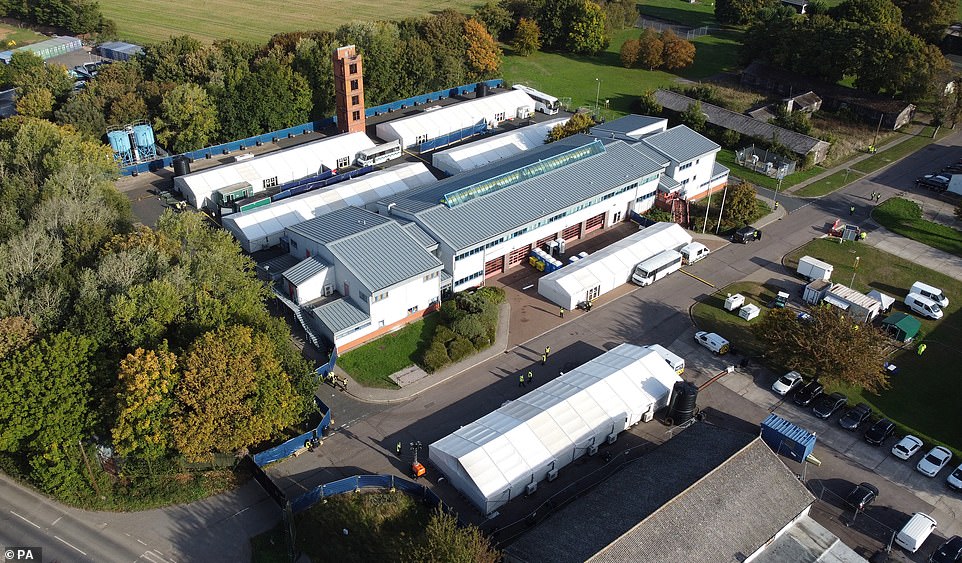 Unions have warned the facility in Manston is ‘like a pressure cooker’, with cases of diphtheria and outbreaks of violence 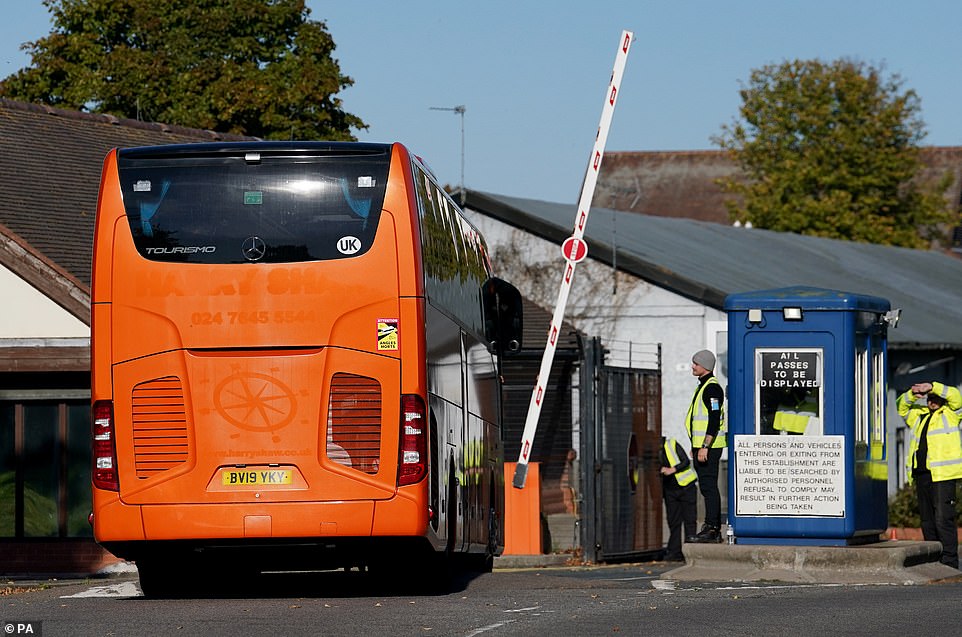 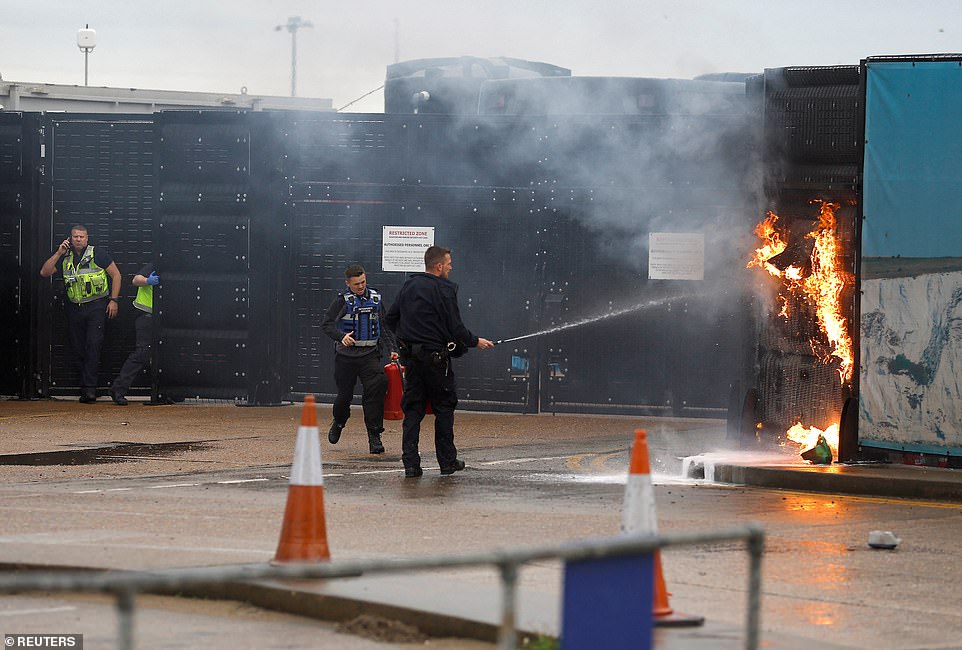 Members of the military and UK Border Force extinguish a fire from a petrol bomb in Dover, Kent, on Sunday

Sir Roger, the MP for North Thanet, told Sky News there were now more than 4,000 people at Manston. He said conditions were ‘wholly unacceptable’ and suggested it may have been allowed to happen ‘deliberately’.

‘That’s like driving a car down a motorway, seeing the motorway clear ahead, then there’s a car crash, and then suddenly there’s a five mile tailback. The car crash was the decision not to book more hotel space,’ he said.

Asked whether Ms Braverman is the right person to handle this situation, Sir Roger said: ‘I’m not seeking to point fingers at the moment but I do believe whoever is responsible, and that is either the previous home secretary or this one, has to be held to account, because a bad decision was taken and it’s led to what I would regard as a breach of humane conditions.’

There have been outbreaks of diphtheria and scabies at Manston – and the Guardian reported there was a case of MRSA. Staff are also reporting outbreaks of violence amid tensions over the conditions.

There have also been outbreaks of violence at the facility, whistleblowers from the camp told the Daily Mail over the weekend. 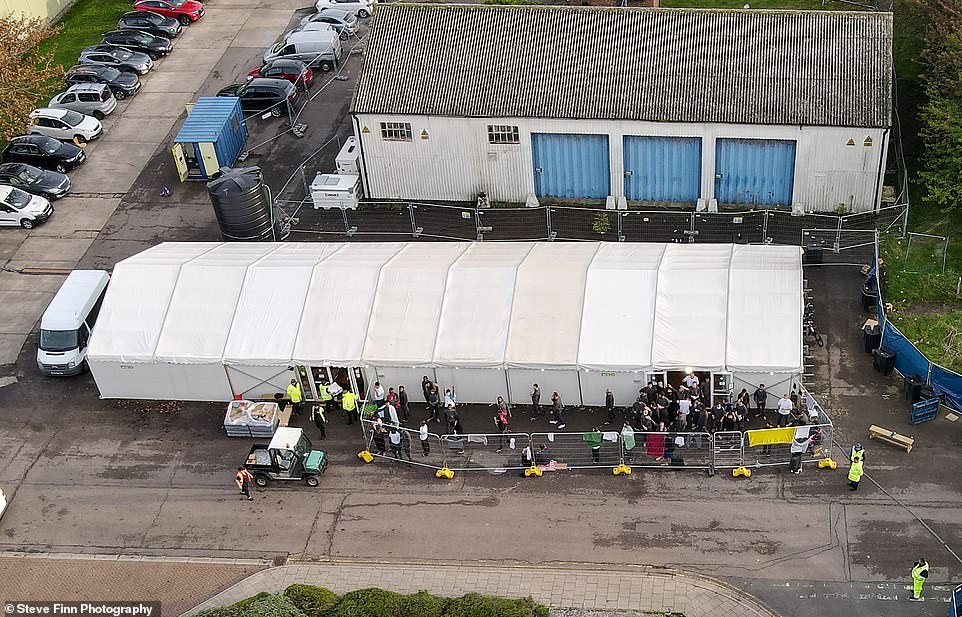 A group of migrants outside the Manston facility last week. The site in Kent is located in a former RAF airfield 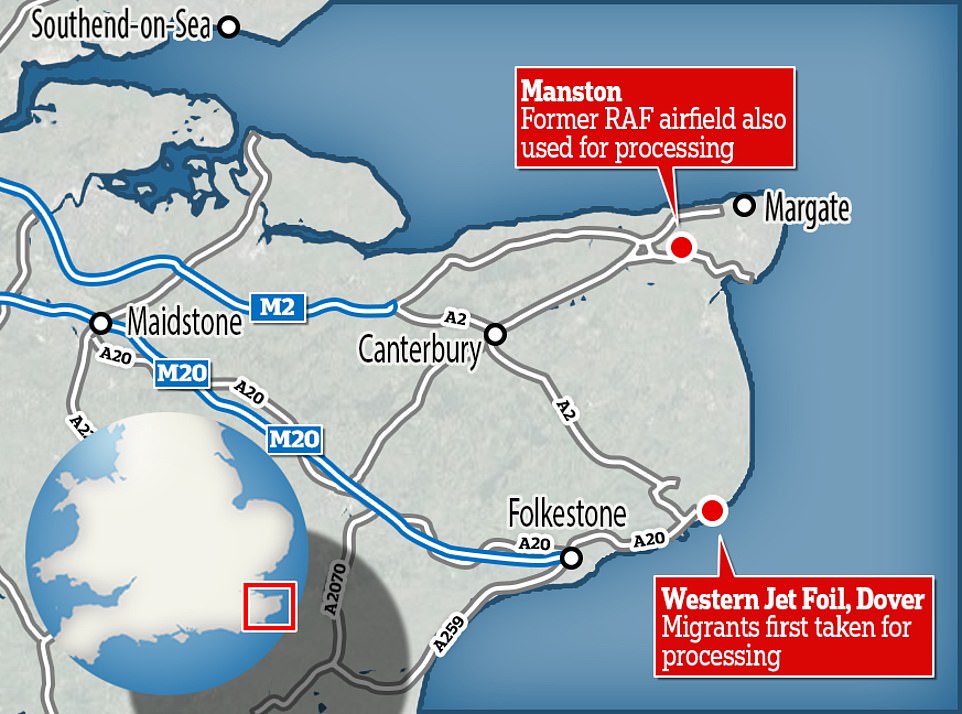 ‘Fights have broken out between Albanians and Eritreans using sharpened combs from their Home Office washbags as weapons,’ the source said.

‘A small Army detachment is inside to help keep order. We have been told riot police are on standby to enter if the migrants kick off in the next few days. It is a tinderbox.

‘Migrants have attacked Border Force officials and security staff, who are scared and outnumbered.’

Chief inspector of prisons Charlie Taylor, who has inspected the facility, said urgent improvements were needed.

‘We were absolutely clear in our report that’s coming out tomorrow that the Home Office and contractors need to get a grip, they need to speed up the processing of migrants, they need to make suitable provisions so people can be moved off site as quickly as possible and housed in humane and decent conditions,’ he told Today. 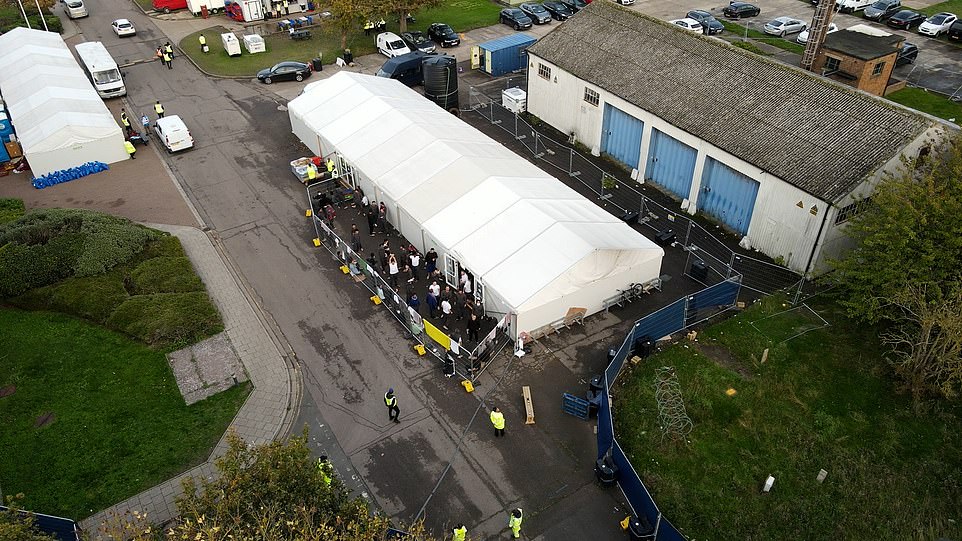 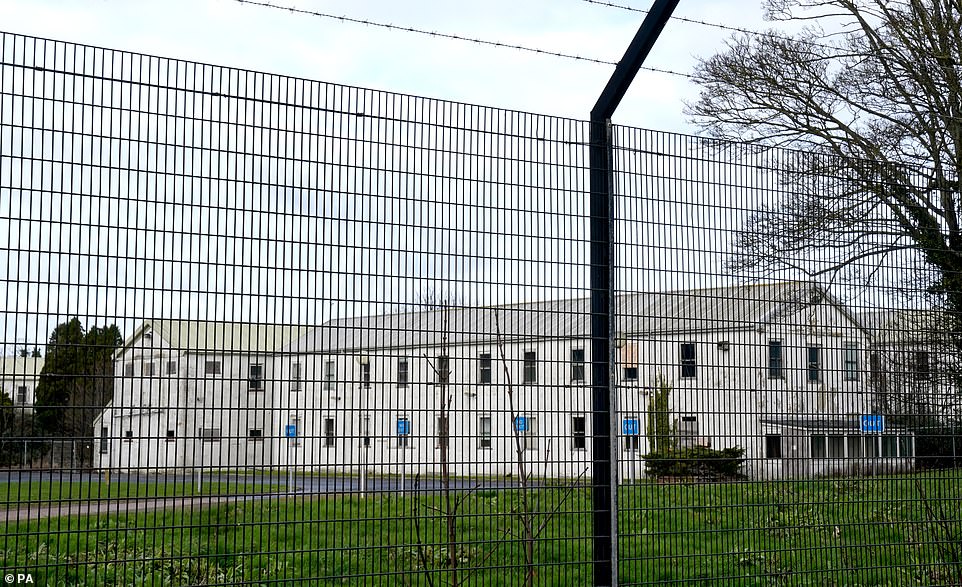 A file photo of the facility, where unions and whistleblowers say conditions have deteriorated in recent weeks

Mr Taylor added: ‘The facilities are not set up for people to be staying. It’s not a residential facility. It’s a short-term holding facility which is supposed to process people through.

‘So the danger is if people are spending long periods of time in what are very cramped conditions without suitable accommodation that’s just not acceptable.’

On Saturday, 990 migrants crossed the Channel in 24 boats, adding to the pressure.

‘It is right we look at all available options so decisions can be made based on the latest operational and legal advice.

‘The number of people arriving in the UK via small boats has reached record levels, which has put our asylum system under incredible pressure and costs the British taxpayer millions of pounds a day.’ 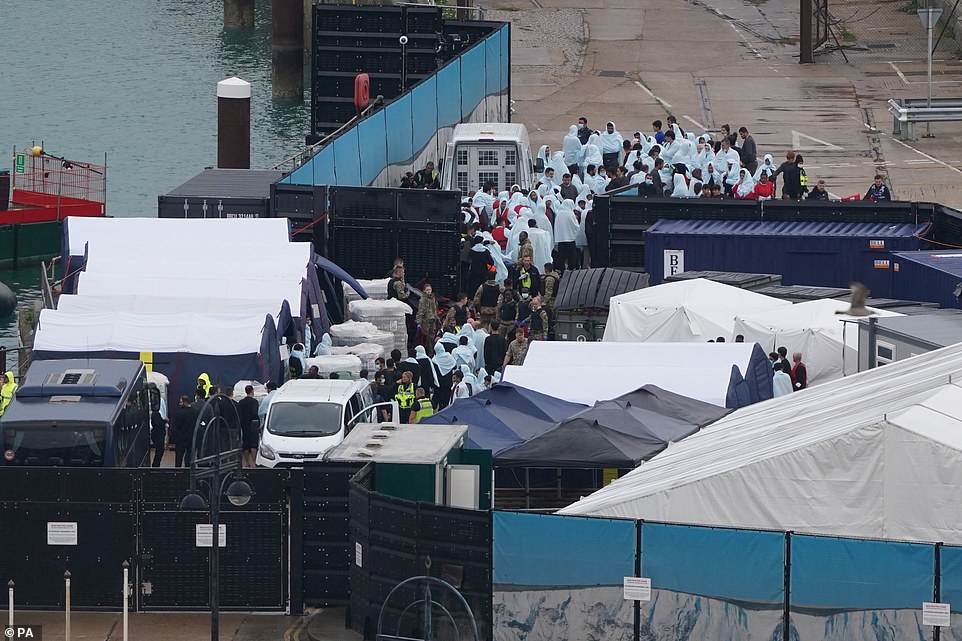 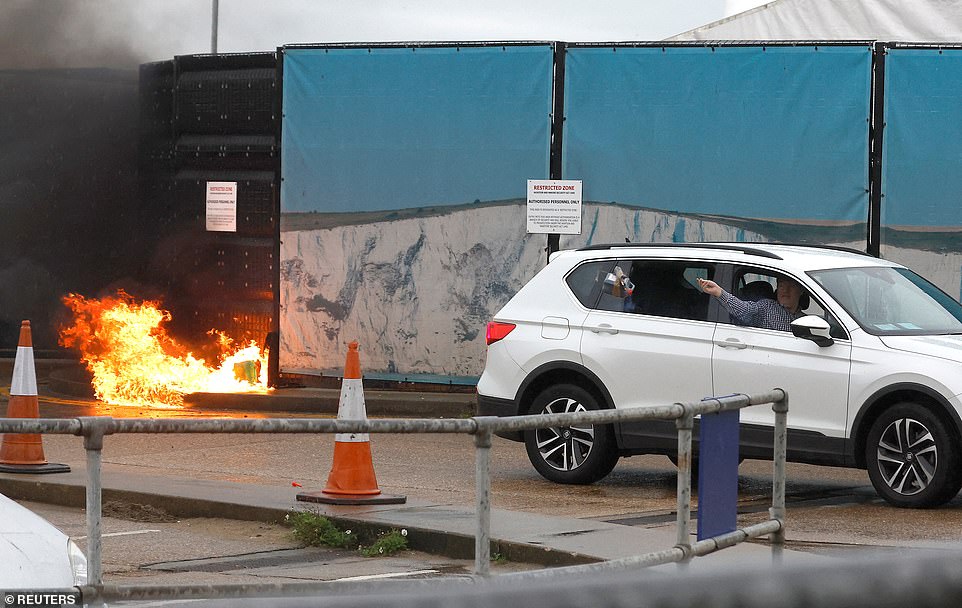