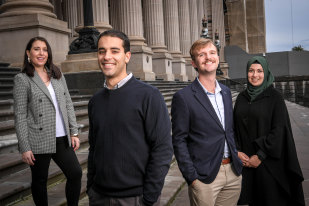 It’s been a busy few months on Spring Street. Lockdowns, vaccine delays, leadership tensions in the Coalition and Premier Daniel Andrews out of action following a fall in March.

These unprecedented times have highlighted the importance of delivering accurate and timely information, and forced me and my team to focus on our promise to hold the state’s decision makers to account.

With a Victorian election due in late 2022, we are committed to delivering you the best state political coverage and insightful profiles of our state’s most influential figures, as well as important investigations that bring about change.

I started as state political editor at The Age in January, having reported on state and federal politics for the past decade. I have covered elections, leadership spills and international summits, exposed expenses scandals and investigated national security issues.

As a political editor in Canberra and on Spring Street, I have witnessed the embarrassing decline of accountability and transparency in our Parliaments, and believe the need for independent public-interest journalism has never been more important.

As a team, we will strive to bring you the latest developments, lead the conversation and present you with clear, accurate and reliable information as it breaks. We promise to hold our politicians and senior officials to account and cover important events without commercial or political influence.

Paul has also investigated the strain on Victoria’s wider health system, which has been linked to cases such as that of a woman who was found dead by an ambulance crew almost seven hours after she called for help.

Sumeyya Ilanbey, who also started at The Age in 2018 as a trainee, joined the masthead’s state politics bureau in November 2019. She has become well known for her tenacious questioning at press conferences and has delivered a range of exclusive stories, including the Yorta Yorta’s fight to restore a pocket of country near the NSW border. Sumeyya was also recognised at last year’s Walkley Awards for her work on The Faceless Man investigation with Nick McKenzie and Joel Tozer.

Another rising star in the bureau is Michael Fowler, who joined The Age as a trainee with Paul and Sumeyya. He worked in a range of reporting roles before landing a job with the state team in May 2020 as Melbourne was hit by its second COVID-19 wave.

We understand that, as subscribers, you share a sense of ownership of this masthead. As a team, we are privileged to have your trust to deliver the news, and we take this responsibility seriously.

Thank you for being a valued reader and subscriber.

Getting to know the team… 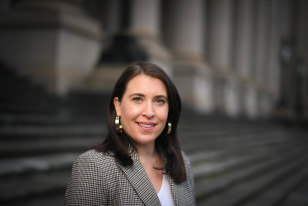 “I have found most politicians – not all – to be a mix of funny, vain, kind, ruthless, charming, eccentric and committed to representing the views of their constituents,” says Annika Smethurst.Credit:Eddie Jim

What did you do before joining The Age?

Before joining The Age team in January, I was based in the federal press gallery in Canberra, where I was the national political editor for the Sunday News Corp mastheads. I have previously covered federal and state politics for the Herald Sun. I have also worked in radio and I started my journalism career in Bendigo.

What are the main issues you are reporting on this year?

I long for a time when COVID-19 isn’t the main story in town, but it continues to dominate in 2021 and we hope to bring you the latest information on the pandemic, the vaccine rollout and restrictions. With a state election due at the end of 2022, my team and I will research and report on the policy platforms offered by all parties to help you make an informed decision.

Do you see a different side to politicians when the cameras are off?

Yes. It’s one of the most frustrating aspects of the job. Working in the state and federal press gallery for the past decade has given me a unique chance to see these strange beings up close. I have found most politicians – not all – to be a mix of funny, vain, kind, ruthless, charming, eccentric and committed to representing the views of their constituents. That doesn’t mean I agree with their views or let them off the hook, but it has always frustrated me that so many of them come across as arrogant and dull when a camera is put in front of them. Intense media scrutiny goes some way to explaining this, but I also think the public plays a role. Often we distrust politicians simply for doing their jobs. And that has the potential to turn good people away from these jobs when we need them the most.

How do you make politics engaging and exciting to readers?

It’s important to balance politics with personality to give our subscribers a thorough understanding of what all the parties and players stand for, but also what shapes and influences our decision makers. I see our role as holding our leaders and decision makers to account to give you the best insight into what is happening in our State Parliament. We also know you want news you can use, whether that is the latest on restrictions or an explanation of the latest legislative changes.

What career advice would you give to your younger self?

Don’t plan too much. Work hard and opportunities will come your way. Oh, and enjoy every minute of it, because this job is a privilege. 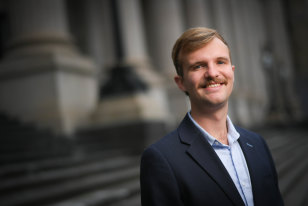 “We have a unique role of being able to connect the public’s concerns with the highest level of government,” says Michael Fowler.Credit:Eddie Jim

What has been your most rewarding day/story while in state rounds?

The final day of hearings for the hotel quarantine inquiry stands out: after six weeks of evidence, we had a team of five writing live updates and separate stories on Premier Daniel Andrews’ testimony, in which he singled out then health minister Jenny Mikakos as responsible for the scheme’s failure. All while working in my icy-cold living room.

What motivates you in your work?

The sense that we can help educate and inform people – especially during the pandemic it has really felt like we can offer a service to the public. And that I can influence change – we have a unique role of being able to connect the public’s concerns with the highest level of government. Last year, individuals’ fines were overturned, exemptions were granted in exceptional circumstances and specific questions around restrictions were answered in part thanks to our reporting.

What’s the best career decision you have ever made?

Sounds corny, but it has to be applying for and being accepted into The Age’s 2018 traineeship program. I started with a fantastic group of five others (Anthony Colangelo, Charlotte Grieve, Sumeyya Ilanbey, Paul Sakkal – who are all still with The Age – and Yan Zhuang, who now works for the The New York Times in Australia) and we worked across business, sport, breaking news, lifestyle and general news. That smorgasbord has been very helpful in being across all the topics linked to state politics.

Do you have any mentors at The Age?

I’ve been lucky enough to work with our most senior journalists across investigations, politics, court reporting, sport and more. I’ve learnt and continue to learn new tidbits from them every time.

What do you do in your downtime?

I love playing and watching soccer, attending live music gigs and going on weekend trips away. Anything except Zoom trivia, really. 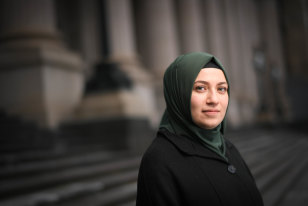 Covering the coronavirus pandemic has been one of the most exhausting and stressful stories she’s worked on, but covering it, has been a privilege, says Sumeyya Ilanbey.Credit:Eddie Jim

What did you do before joining state rounds?

I had completed a year of the traineeship program at The Age, and prior to joining this masthead in November 2018, I was working at a local paper for several years.

What’s the career highlight you’re most proud of?

Working on two separate investigations with two of the most diligent reporters: Chris Vedelago on toxic waste, which resulted in legislative change; and Nick McKenzie on branch stacking within the Labor Party, which led to once-in-a-generation reforms in the Victorian branch of the ALP. Covering the coronavirus pandemic – especially during the second wave – has been one of the most exhausting and stressful stories I’ve had to work on, but covering it, having a front-row seat to history in the making, has been an absolute privilege.

Which topics interest you personally?

I have always been interested in politics, but other areas I’m interested in are foreign affairs, the criminal justice system, and social affairs.

Who of your colleagues do you find most inspiring?

What are you reading and listening to at the moment?

I’m reading a few books simultaneously: Too Much Lip by Melissa Lucashenko, The Menzies Era by John Howard, For Whom The Bell Tolls by Ernest Hemingway, and The Gillard Project by Michael Cooney. In terms of listening habits, I generally listen to RN Breakfast in the mornings and ABC NewsRadio during the day if I get a chance to. 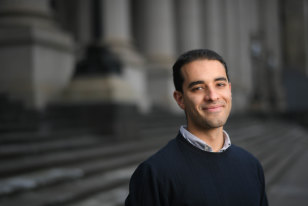 Paul Sakkal encourages young readers who want to become journalists to read about everything, not just their niche interests.Credit:Eddie Jim

What is your proudest accomplishment?

Being involved in our newspaper breaking stories and leading the media coverage of last year’s hotel quarantine leaks and second wave. It was one of the most consequential periods in the state’s history and The Age wrote the first draft of history stoically, while adding crucial information that shaped that history.

At the Quills, it was super-special to be on a table with three trainees who I started my career with – including Michael and Sumeyya – and nearby a table of Age reporters whose writing I grew up reading and admiring, including Greg Baum, Jake Niall and Nick McKenzie. The Walkley ceremony was in Sydney, so it was just nice to get on a plane for the first time since the pandemic took over our lives.

What was your first job?

A short-lived stint waiting tables at a burger shop on Chapel Street. My friend’s mum owned the place, but that didn’t stop me falling out of favour quite quickly.

What advice would you give young readers wanting to become a journalist?

Read about everything, not just your niche interests. Don’t be scared to call or meet someone who intimidates you because of their position or influence; journalists have a special right to pester whomever they want.