Met Police criticised by watchdog for failing to record 69,000 crimes

The troubling state of the Metropolitan Police was laid bare today, from a failure to record 69,000 crimes including stalking, domestic abuse and anti-social behaviour to an ‘inadequate’ response to 999 calls.

The police watchdog has raised ‘serious concerns’ about the performance of Britain’s biggest force after it failed in six out of nine areas of police work, with inspectors warning the blunders are ‘resulting in some offenders not being brought to justice’.

Inspector of Constabulary Matt Parr said he was particularly concerned about how the Met treated victims of crime. He told BBC Radio 4’s Today programme: ‘I think it’s got worse over the period I’ve been looking at the Met which is about five or six years. And since our last report in this area we think performance has declined since then.

‘One of the Met’s fundamental problems is it needs to get that lower level leadership right and have a low tolerance of poor standards. Inexperienced and new staff work better when they’re have strong guidance and that’s not happening.’ 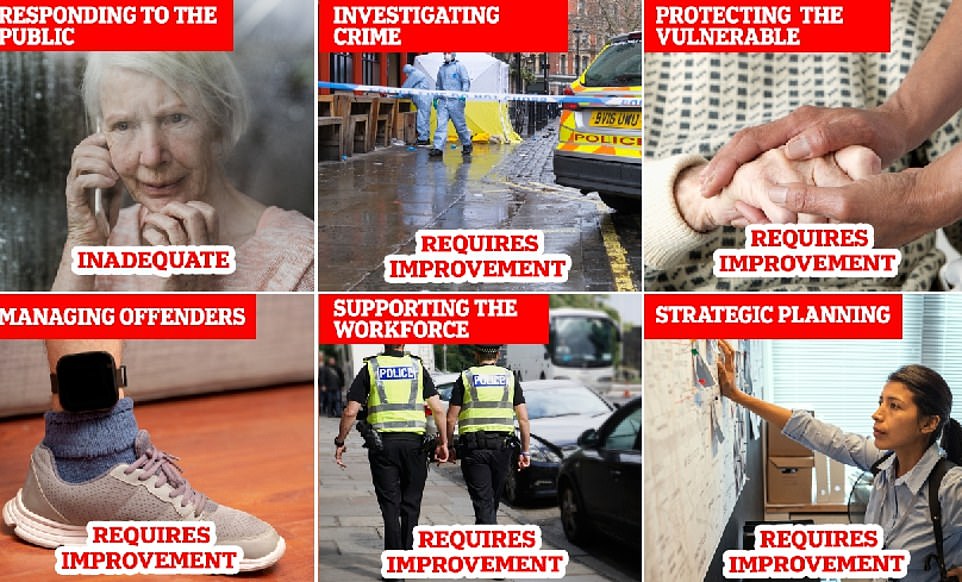 The police watchdog has raised ‘serious concerns’ about the performance of Britain’s biggest force after it failed in six out of nine areas of police work, with inspectors warning the blunders are ‘resulting in some offenders not being brought to justice’

His report found crime recording ‘should be trustworthy’, but instead more than 69,100 offences are going unrecorded by the force each year, with victims of domestic violence or those suffering long-term abuse such as stalking, controlling and coercive behaviour or harassment being ignored.

Not all reports of rape are correctly recorded and in some cases it is taking more than three days for crimes to be logged leading to delays in rape investigations and victims receiving support.

Inspectors believe the force is turning a blind eye to many incidents of anti-social behaviour, with just one out of the 21 calls from victims it reviewed leading to a crime being logged.

The force was graded as ‘inadequate’ in the way it responds to the public, with call handlers unable to answer 999 calls quickly enough, failing to identify vulnerable or repeat victims and ‘missing opportunities to preserve evidence which may help investigations’.

Shoddy investigations by inexperienced detectives are also letting some criminals off the hook, the report found.

The report comes three months after the Met was put into special measures by the watchdog, which means it now faces external monitoring and must come up with an improvement plan.

The latest damning indictment comes after Commissioner Cressida Dick was forced to quit in February following a torrid year of scandals which saw the murder of Sarah Everard by one of her officers, the force being branded ‘institutionally corrupt’ by an independent inquiry and Met officers jailed for photographing bodies of murder victims.

Mr Parr said his report ‘raises serious concerns about how the force responds to the public and the level of understanding the force has about its demand and its workforce’.

He said: ‘The Met must get better at how it responds to the public – currently, its call handling teams are unable to answer calls quickly enough. In addition, it isn’t correctly documenting the decisions of victims to withdraw from an investigation or to accept an out-of-court disposal.

‘Recording victims’ wishes is vital to support the criminal justice process and to understand what is stopping victims from being able to complete the investigation process. The Met must improve in this area.’

Mr Parr found that investigations are ‘not always reviewed or overseen properly’ adding: ‘A lack of experience in responding to and investigating incidents of crime leads to delays for victims and makes successful criminal justice end results less likely.’

He warned: ‘The force doesn’t have enough capacity and capability in its frontline policing roles to meet demand.

‘It isn’t consistently supervising crime investigations to a good standard, resulting in some offenders not being brought to justice.

‘Until the force improves how it responds to incidents and increases the capability and supervision of its investigators, it will not be able to sustainably reduce crime.’ 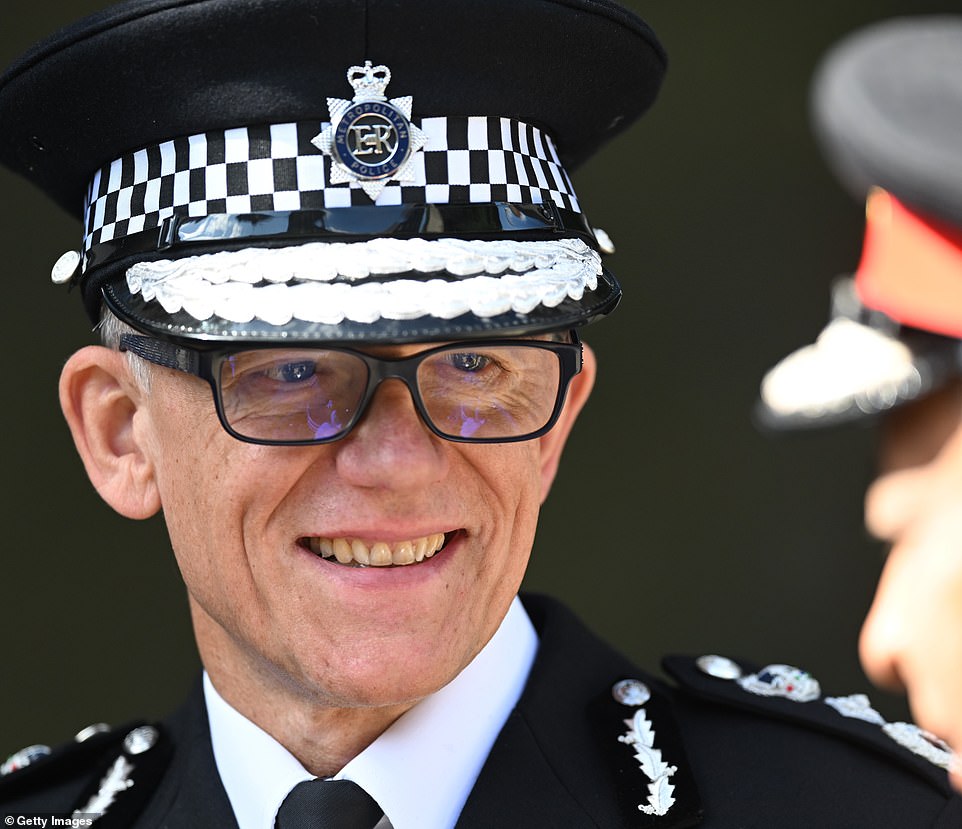 Officers are also failing to communicate with victims about why their case is being dropped or why cautions are being offered in lieu of more harsher punishments.

He suggested overloaded officers and staff are struggling with ‘unmanageable’ caseloads and being forced to work on their days off to get through their work.

In addition, Mr Parr found officers were failing to record the grounds for stop and searches.

Although he said there was reason for hope that the force can improve: ‘We found many examples of police officers and staff working hard, professionally and with compassion in very difficult circumstances. We also found considerable evidence of fair treatment and inclusive engagement with the communities the force serves.’

Mr Parr stressed the Met “operates under scrutiny other forces do not face”, praising how it led one of the biggest police operations in the UK’s history in the wake of the Queen’s death while also contending with an incident in which two of its officers were stabbed.

The findings also describe “many successes and some examples of innovation”, he said, adding the Met is “good at preventing crime and anti-social behaviour, and has developed innovative techniques to improve how it collects evidence and identifies offenders, such as its new forensic technique for detecting the presence of blood on dark clothing and its new rapid testing kit for drink spiking”.

A spokesman for the Metropolitan Police said the new Commissioner is committed to addressing all of the issues that the report highlights.

Dame Lynne Owens, Deputy Commissioner, said: ‘Our new Commissioner, Sir Mark, has returned to policing with a clear plan for change at the Met.

‘We are both determined to renew policing by consent, working with communities to deliver the kind of police service Londoners need and deserve.

‘We will be using data and insight to improve the Met’s performance on crime fighting and prevention.

‘We want to remove as many hurdles as possible to make it easier for hardworking officers to fight crime, deliver justice and support victims.

‘Our pledge to London is ‘more trust, less crime, high standards’. Here, at the start of our first 100 days, we are drawing together expertise from across the Met and beyond, listening to our communities and the workforce, to put in place the right plans and take swift action to deliver our pledge.’ 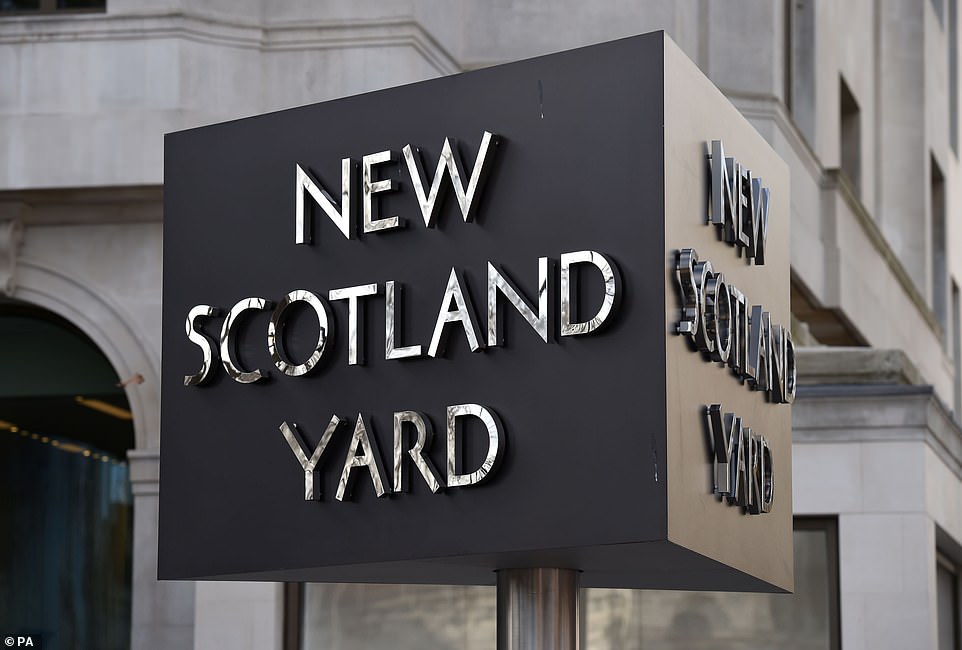 In a sternly worded letter before his tenure began, then-home secretary Priti Patel demanded Sir Mark address the “appalling mistakes of the past”, listing the murder of Sarah Everard by a serving officer, strip searches of children, and the abject failures investigating the deaths of the victims of serial killer Stephen Port among the key issues that had damaged public confidence.

In response to the watchdog report, a Home Office spokesman said: “The findings in this report are deeply concerning. The people of London expect better and the Met must work to implement the necessary improvements as a matter of urgency.”

“Earlier this month the Home Secretary met with Sir Mark Rowley and was reassured by his immediate plans to address these issues and restore the public’s trust in policing.

“The Met, as the country’s largest force, shoulders immense responsibility and recently played a critical role during the national period of mourning for Her Majesty Queen Elizabeth II. It is essential that the professionalism shown over the past few weeks is replicated in all they do to keep the public safe.

“Ministers will be monitoring closely the progress towards improvement and the rebuilding of trust and confidence. We expect the Mayor’s Office for Policing and Crime (MOPAC) to work with the Met leadership to deliver this transformation.”

There has also been outrage over racist, sexist and homophobic messages shared by a group of officers based at Charing Cross police station between 2016 and 2018, questions raised over the force’s approach to tackling corruption and its use of stop and search as well as ongoing investigations into deaths following police contact, including that of Chris Kaba, who was fatally shot by an officer.

On Wednesday a judge branded comments made by a serving Met officer and a former constable “sickening” and “abhorrent” as they were convicted of sending grossly offensive messages in a WhatsApp group with Ms Everard’s killer.

In the wake of her murder, two separate reviews into the Met are taking place and HMICFRS is also reviewing vetting procedures used by all forces in England and Wales.