Mexico City: Mexico City has warned residents to remain indoors as forest and bush fires carpet the metropolis in smoke. 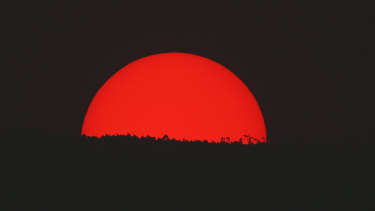 Tinted blood red by a thick cloud of smoke and pollution, the sun sets on the mountains above Mexico City on Monday.Credit:AP

The Environmental Commission of the Megalopolis said the air was polluted with high levels of solid particles, such as ash, that can cause respiratory problems and other illnesses upon prolonged inhalation. 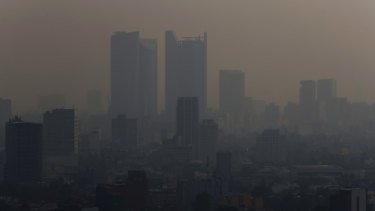 Smoke hangs over the Mexican capital on Monday.Credit:AP

At the same time, blazes in the southern states of Oaxaca and Guerrero – combined with a high-pressure weather system- are carrying contaminants into the Valley of Mexico.

Residents blame the city's increasingly high levels of air pollution on global warming. Mexico's dry season has extended in recent years, leading to less rain during the summer months and higher temperatures. The capital has the added challenge of being in a valley, which traps dirty air and particles. Then there are the millions of cars belching exhaust. And now the fires.