Miami: Investigators were working to determine what caused a 40-year-old South Florida beachside condo building to collapse, killing at least one person and leaving nearly 100 a missing.

Researchers revealed that the building had been found to be sinking as far back as the 1990s.

Rescuers continued to search for survivors after part of the Champlain Towers South, a 12-storey condominium, “pancaked” in the town of Surfside, Florida, shortly before 2am on Thursday, Mayor Charles Burkett said. 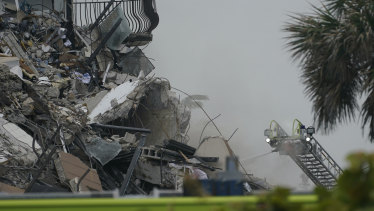 Firefighters use a ladder hose as smoke comes out of the rubble of the partially collapsed building.Credit:AP

About half of the building’s more than 130 units were affected, said Miami-Dade County Mayor Daniella Levine Cava, and officials fear many more may be dead and trapped under the rubble.

The collapse killed at least one person and has left 99 still unaccounted for, officials said.

Why the building collapsed is not immediately known.

Burkett said the roof was being worked on recently, but he did not think that caused the building to fall. 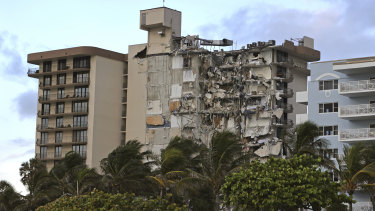 The L-shaped Champlain Towers South was not old relative to some other art deco buildings in South Beach built in the 1920s.

“There’s no reason for this building to go down like that unless someone literally pulls out the supports from underneath or they get washed out or there’s a sinkhole,” Burkett said. “… because it just went down.”

The town of Surfside requires commercial and multi-family buildings to be recertified every 40 years, which involves electrical and structural inspections for a report to be filed with the town. That process was underway for the building but had not yet been completed, town officials said on Thursday.

“Bottom line is that’s not an old building, and 40-year inspection or not, that kind of thing should not be happening,” Burkett said.

A researcher at Florida International University said the building was constructed on reclaimed wetlands and was determined to be unstable a year ago.

The building was sinking at a rate of about two millimetres a year in the 1990s, and the sinking could have slowed or accelerated in the time since, according to a 2020 study conducted by Shimon Wdowinski, a professor in the Department of Earth and Environment at Florida International University. 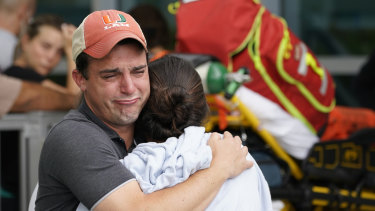 A couple embrace as they wait for news of survivors from the collapse. Credit:AP

Burkett did not know how heavy the equipment being used to work on the roof was, but he did not think the weight of it would have caused the collapse.

“It’s hard to imagine that that could have been the impetus for such a catastrophic collapse,” he added.

Rescue operations were ongoing as of Thursday evening. 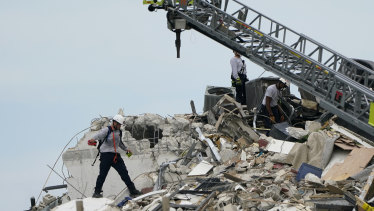 Rescuers pulled dozens of survivors from the tower during Thursday morning, local time, and continued to look for more.

“They’re doing everything they can to save lives,” Governor Ron DeSantis said. “We still have hope to be able to identify additional survivors.”

Officials have accounted for 53 people who lived in the building, but 99 people remained unaccounted for by mid-afternoon, said Rachel Johnson, a spokeswoman for the mayor of Miami-Dade County. Johnson stressed that the numbers continued to shift as authorities figure out how many people were actually in the building overnight.

Burkett warned that the death toll was likely to rise, saying the building manager told him the tower was quite full at the time of the collapse around 1.30am, but the exact number of people present was unclear.

Miami-Dade County Mayor Daniella Levine Cava said she got a call from President Joe Biden, who offered federal aid. Hotels opened to some of the displaced residents, she said, and deliveries of food, medicine and more were being hastily arranged.

Online records show more than 130 units in the building. Some were owned by individuals and other by LLCs.

A few two-bedroom units in the development are listed for sale with asking prices of $US600,000 to $US700,000, an internet search shows.

The building’s website promotes “incredible oceanfront views or spectacular views of inter-coastal waterway with the city in the background”.