"I cannot and will not support Judge Jackson for a lifetime appointment to the Supreme Court," McConnell said in a speech on the Senate floor.

The Kentucky Republican cited as the reasons for his opposition Jackson's answers on adding seats to the Supreme Court — a proposal she declined to opine on — and her record on both the federal district court and U.S. Court of Appeals for the District of Columbia Circuit.

"Judge Jackson was the court-packers' pick, and she testified like it," McConnell said. 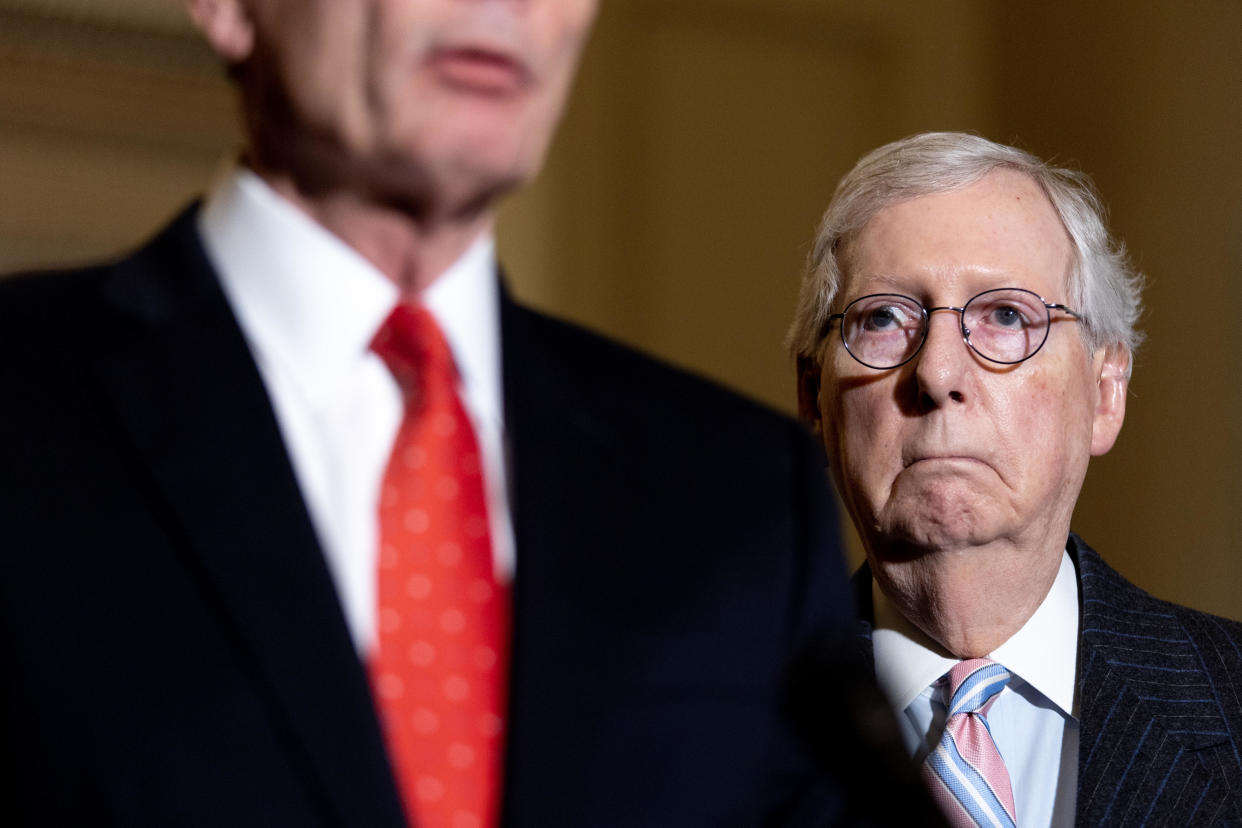 Across her two days of testimony before the Senate Judiciary Committee this week, Jackson, who is the first Black woman nominated to the high court, declined on numerous occasions to divulge her opinion on proposals to grow the size of the Supreme Court, which has been advocated by progressive judicial groups that are vocal supporters of her nomination.

"Other nominees to this Supreme Court have responded as I will, which is that it is a policy question for Congress and I am particularly mindful of not speaking to policy issues because I am so committed to staying in my lane of the system because I just am not willing to speak to issues that are properly in the province of this body," she said.

McConnell also indicated that Jackson has too slim of a record from her near-year on the D.C. Circuit. During her tenure there, she has issued two written decisions, which McConnell contrasted with the number of opinions from Justices Neil Gorsuch, Brett Kavanugh and Amy Coney Barrett during their years on the federal appeals court.

Jackson has authored more than 570 decisions in her tenure on the federal bench, the vast majority of which are from her eight years on the federal district court in Washington. Still, McConnell said some of her decisions there, namely her sentencing record, is "troubling."

Some Republican senators have criticized Jackson for her record of sentencing child pornography offenders and imposing sentences that are more lenient than federal guidelines.

Pressed extensively about the issue during her confirmation hearings, Jackson defended her decisions and said she was acting under parameters set by Congress under federal law.

"I have law enforcement in my family. I'm a mother who has daughters, who took these cases home with me at night because they are so graphic in terms of the kinds of images that you are describing," she said, adding that she is "fully aware of the seriousness of this offense, and also my obligation to take into account all of the various aspects of the crime as Congress has required me to do and I made a determination seriously in each case."

McConnell's opposition to Jackson's nomination is not a surprise, as he opposed her confirmation to the D.C. Circuit last year.

Jackson can win approval from the Senate to the Supreme Court without Republican support if she is backed by all 50 Democratic senators, with Vice President Kamala Harris casting the tie-breaking vote. Still, the White House has been hoping her confirmation will be bipartisan.

McConnell's announcement comes less than 24 hours after Jackson completed a grueling two days of questioning from the Senate Judiciary Committee's 22 members. The panel is expected to vote to advance her nomination to the full Senate on April 4, and Democratic Senate leaders are hoping the final confirmation vote will take place before they depart for two-week recess April 8.

She will replace the retiring Justice Stephen Breyer if confirmed, and her appointment will not alter the court's ideological divide.