A driver lost his arm after texting at the wheel, smashing into street signs and overturning his car into oncoming traffic.

The driver, who had to undergo an amputation and wished to remain anonymous, gave permission for the video to be released as part of a police crackdown on dangerous driving.

Sussex Police and Crime Commissioner Katy Bourne described the footage as ‘a shocking display of the consequences of dangerous driving’. 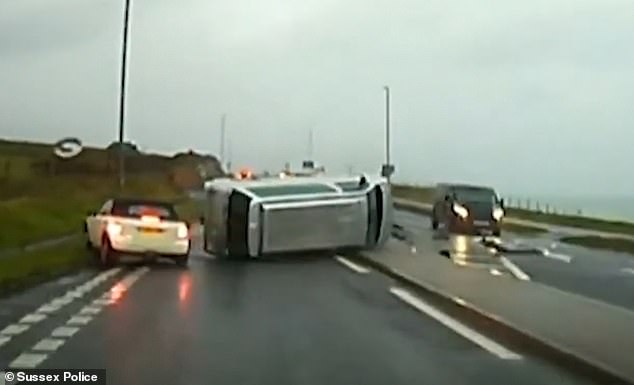 A driver who was texting at the wheel crashes into street signs and flips over his car into oncoming traffic on Roedean Road, Brighton

In the video, a cream Mini drives forward on a single carriageway in the rain as the texting driver approaches in a silver people-carrier.

The people-carrier is driving down the middle of the road and smashes into signs on an island at a junction at speed.

It flips onto its side onto the lane of oncoming traffic, skidding forward and twisting around.

The mini driver narrowly avoids the upturned car, turning into the path on the side of the road and stopping as debris from the crash lies on both lanes. 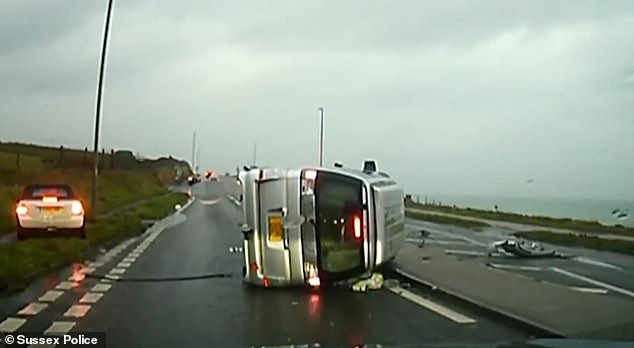 Police released the video of the crash, which happened on 15 November last year, to raise awareness of the ‘fatal five’ offences: speeding, drink and drug-driving, mobile phone use, not wearing a seatbelt, and careless and inconsiderate driving.

It follows a week of action during which hundreds of offences were detected on the roads in Sussex.

Assistant Chief Constable Dave Miller said: ‘While we don’t wish to shock and scare people with this footage, it’s important that road users understand the serious consequences of the ‘fatal five’ offences.

‘By taking personal responsibility and driving safely and sensibly, you can help us reduce the number of people killed and seriously injured in Sussex and Surrey.’ 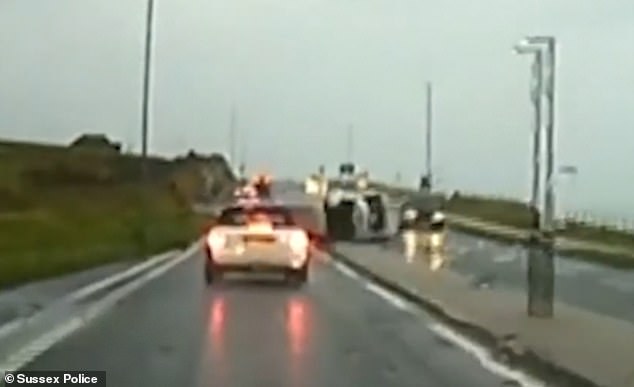 Sussex Police and Crime Commissioner Katy Bourne said: ‘The video being shared by Sussex Police is a shocking display of the consequences of dangerous driving and I am grateful to those that have agreed to share this.

‘It really enforces the fact that we all use the roads and must share the responsibility of ensuring the safety of ourselves and others.

‘Road safety will continue to be a top priority for Sussex Police because it matters to local residents.

‘The sobering message from this video is not to drive irresponsibly because the consequences can be dangerous and life-changing.’

Last year in Sussex, 39 people were killed in vehicle collisions. Across the UK, there were 1,870 road deaths in the year ending June 2019.