British holidaymakers heading abroad were hit by further long queues at UK airports today as others were warned strike action across Europe threatens to wreak further havoc on summer getaways.

As queues built up at Bristol Airport again pre-4am this morning, unions representing Ryanair crew in Spain said they had ‘no option’ but to call for a walk-out after the carrier abandoned pay talks.

The move raises the prospect of more misery for travellers, many of whom are still stuck at holiday destinations after their flights home were cancelled following half-term flight chaos.

There were also huge queues at London Heathrow Airport this morning, where Shadow Foreign Secretary David Lammy tweeted this morning: ‘Arriving from work in Afghanistan this morning at 7am.

‘(Home Secretary) Priti Patel has achieved the longest passport control queue I have ever seen at Heathrow. A warm welcome home to fellow citizens and visitors alike. Another feather in her cap. Well done.’

An estimated 10,000 passengers were grounded yesterday as easyJet pulled another 60 flights.

The boss of Heathrow has already warned of up to 18 months of disruption as the aviation industry struggles to recruit and train staff to replace those let go during the pandemic. 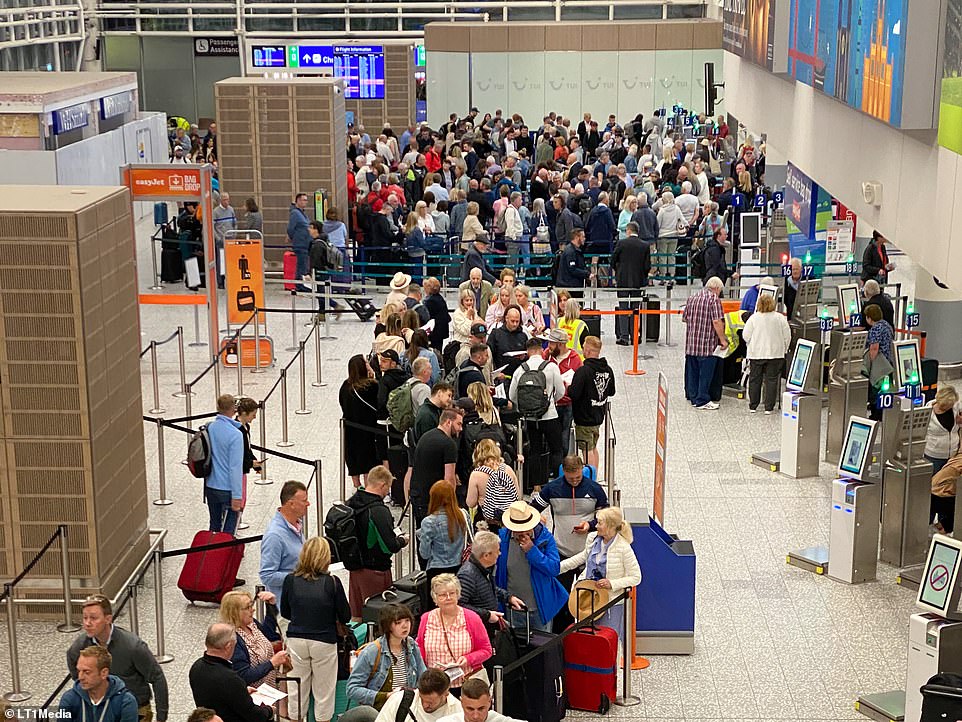 BRISTOL AIRPORT: Huge queues at Bristol Airport this morning again as people arrive before 4am for their flights 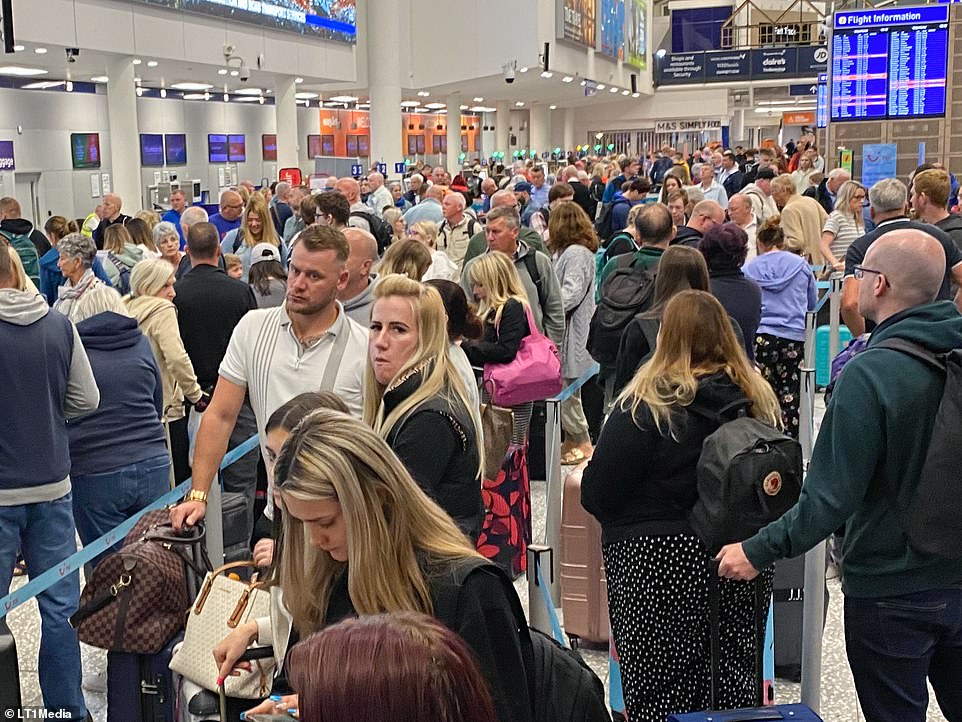 Yesterday consumer groups responded by calling for tougher action against airlines that fail to switch passengers to another carrier.

Rory Boland of Which? Travel said it was totally unacceptable that easyJet customers had seen their holiday plans thrown into chaos at the last minute.

He added: ‘The cavalier approach some airlines are currently taking toward their customers is a reminder of why passenger rights must be strengthened.’

Mr Boland said the Civil Aviation Authority should be given direct fining powers to hold airlines to account when they flout the law.

One father told yesterday how his child had to urinate in a plastic bag as his family endured a two-hour security queue at Manchester Airport ahead of a flight to Berlin.

In Italy, crews from Ryanair and easyJet walked off the job on Wednesday, while workers at France’s Charles de Gaulle airport went on strike yesterday for more pay, with a quarter of flights cancelled.

They have previously warned of co-ordinated action with colleagues in Italy, France, Portugal and Belgium.

Ryanair last night insisted it had reached agreement with 90 per cent of its workers, including with Spain’s biggest union.

It branded the threats from smaller unions ‘a distraction from their own failures to deliver agreements’ adding that ‘we do not expect widespread disruption this summer’. EasyJet apologised to stranded passengers, blaming the strikes in Italy and France.

The Daily Mail reported yesterday that air fares could rise by nearly 10 per cent this summer, partly through higher fuel costs.

Also earlier this week, a leading airline boss sparked a safety row after urging pilots to keep working even if they are ‘fatigued’.

Jozsef Varadi, the chief executive of Wizz Air, has come under fire after calling on staff to lower the company’s ‘fatigue rate’.

In an internal video seen by the Daily Mail, the budget airline boss said: ‘We are all fatigued but sometimes it is required to take the extra mile. We cannot run this business when every fifth person of a base reports sickness because the person is fatigued.

‘The damage is huge when we are cancelling the flight. It is the reputational damage of the brand. And it is other financial damage because we have to pay compensation for that.’

Wizz Air has been forced to axe dozens of flights in recent weeks amid staff shortages and wider travel disruption across the UK.

But Martin Chalk, general secretary of the British Airline Pilots’ Association, condemned Mr Varadi’s comments, saying: ‘I am shocked that an airline CEO would advise actions so contrary to even a basic safety culture.

‘I would urge Mr Varadi to swiftly clarify that Wizz Air would fully support any pilot who does the right thing for the safety of their passengers, crew and aircraft by not flying if they are fatigued.’

The controversy comes after the Hungarian-based carrier announced it had racked up losses of £550million for the 12 months to the end of March – although revenue more than doubled to £1.4billion.

More than 27million passengers flew with Wizz Air last year – up from 17million the year before.

In an optimistic address, Mr Varadi said he expects the airline to deliver its ‘largest ever summer flying programme and the fastest growth in the industry’.

However Wizz Air is expecting to post further losses between April and June due to higher fuel costs and ongoing airport chaos.

Other major airlines, such as British Airways and easyJet, have also faced disruption since Covid travel curbs were loosened in March.

Earlier this week, Sajid Javid blasted the industry, saying it was ‘about time [it] took more responsibility for sorting its own challenges out.’

The Health Secretary added: ‘We haven’t seen similar problems in France, Germany or Italy. They also have very low unemployment rates like we do so they face labour market challenges like we do. The industry should have done better. The industry got caught out.’

A Wizz Air spokesman said: ‘Supply chain issues are affecting all airlines, in particular staff availability and welfare. In this context, going the extra mile for all our customers to minimise disruption was a main topic of this briefing.’

They added that safety is the airline’s ‘first priority’ and said they have ‘a robust and responsible crew management system’.