A mother has been left mortified after accidentally sending pictures of her sunburnt bottom to carpet fitters when requesting a quote.

But soon after hitting send, she realised she had sent the image to flooring shop Carpets At Home after enquiring about their prices.

‘When I was asked to send a picture of my halls, stairs and landing I’ve clicked that as well. I realised instantly that I’d sent that picture when they all came up on my screen.’ 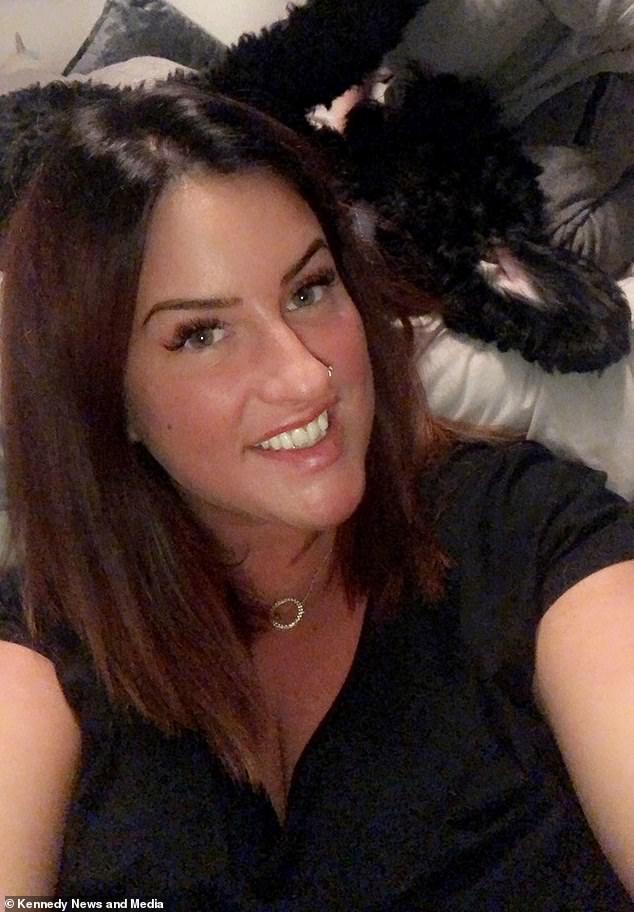 Danielle Cain, 31, from Wigan, Greater Manchester, initially shared the cheeky photo with her new beau through Facebook messenger. But she was left mortified after accidentally sending the racy image to a carpet fitting company while requesting a quote from them

‘I looked and messaged them “oh my god, I didn’t mean to send that I’m so so sorry, I’ve burned my bum on a sunbed”.

‘What makes it worse is those pictures that I sent in was of my stairs and landing before I decorated and it looks so scruffy on the pictures.

‘It’s all over the internet now and everybody’s going to be thinking “what a scrubber”. I don’t know now if I could use the company now because they’ve all seen my bum,’ she added.

She quickly followed her X-rated mistake with a flurry of apologetic messages to the company page, which the social media manager assured her she would delete.

Ms Cain, who lives with her children son Ellis Major, 12, and Alfie Major, eight, explained that she had been on sunbeds tanning her back side when she burned it and told her partner about the singe who then asked to send photos.

She said: ‘I went on the sunbeds for 12 minutes two days before I sent that picture to them.

‘I go on them regularly but I usually cover my bum up, I had a square on my bum where I’d been covering it up, I wanted to get rid of it so I went on with nothing on it.

‘I realised I’d burned my bum when I tried to get into the bath later on and it was stinging,’ she said, adding that she had to use her son’s eczema cream to sooth the burn.

She took to Facebook to post to shared hilarious blunder which has since gone viral with 4,400 comments and 1,900 shares.

In her post, she warned: ‘I’ve messaged a company for a price for a carpet on my stairs and landing, he’s asked me to send pics I’m absolutely mortified. Make sure u check what u click (sic).’

She took to Facebook to post to shared hilarious blunder which has since gone viral with 4,400 comments and 1,900 shares and warned others to make sure they check what they click 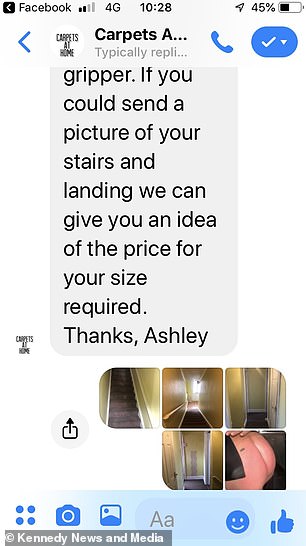 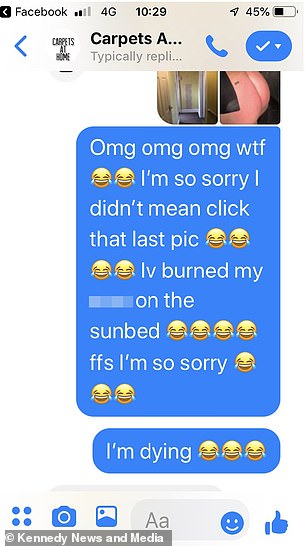 After accidentally sending the image along with photos of her hallway and stairs, Ms Cain quickly followed her X-rated mistake with a flurry of apologetic messages to the company page

Ms Cain wrote in the exchange with the carpet fitters: ‘Hiya the stairs and landing for £99 does that include underlay and grips? Xx’

Ashley from Carpets At Home replied: ‘Hi Danielle, our from £99 is based on a small stairs and landing in our budget carpet including fitting but not including underlay and gripper. If you could send a picture of your stairs and landing we can give you an idea of price for the size required. Thanks, Ashley’.

It was then the mother-of-two realised she had sent the embarasing image, to which she replied: ‘Omg, omg omg wtf I’m so sorry I didn’t mean click on that last pic Iv burned my a*** on the sunbed ffs I’m so sorry. I’m dying. (sic)’ 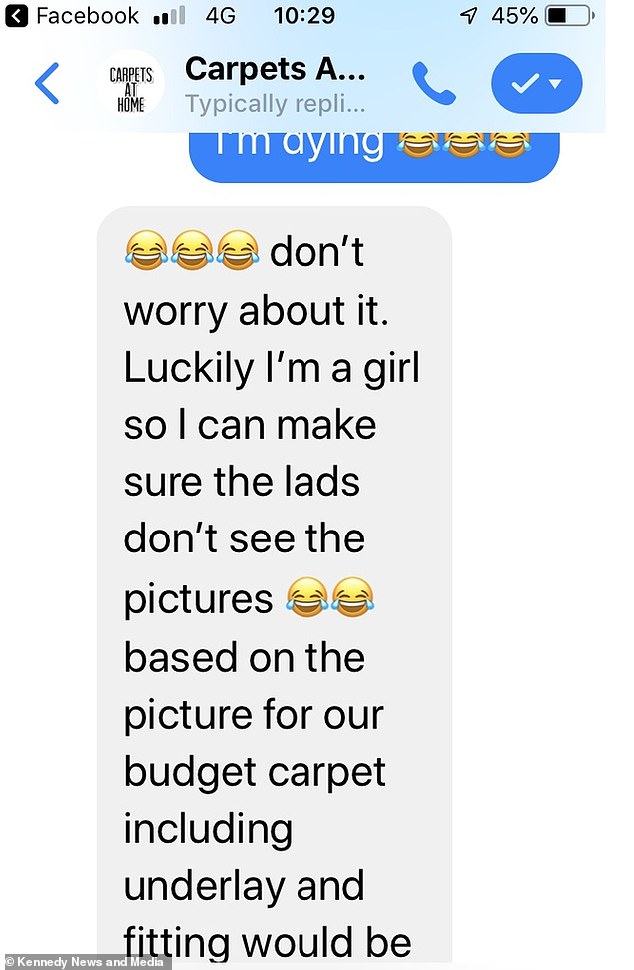 Luckily for Ms Cain, the company’s social media manager assured her she would get rid of the images so her male colleagues would not see 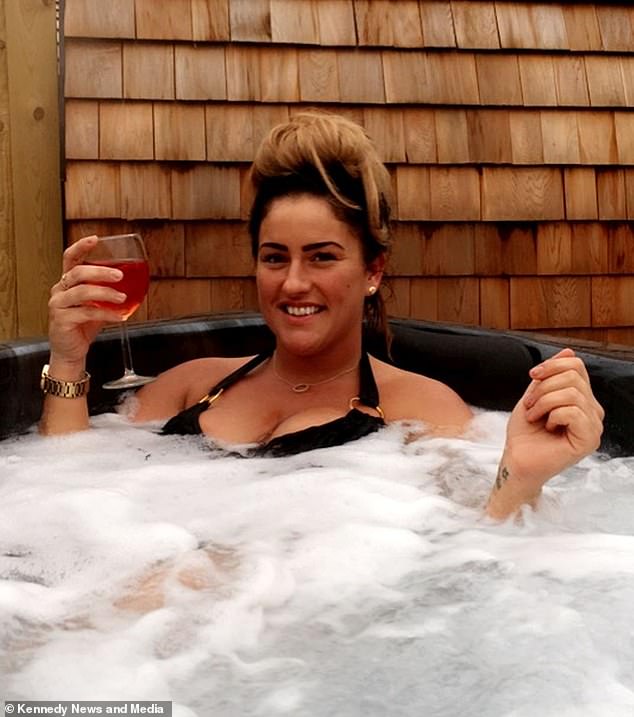 Despite receiving the unexpected photo, Carpets At Home’s social media manager Ashley kept the exchange professional and assured Ms Cain (pictured) it wasn’t a problem and that she would hide it from her male colleagues

Despite the company receiving the unexpected photo, Carpets At Home’s social media manager Ashley who replied, kept professional and assured her it wasn’t a problem.

Ashley wrote: ‘Don’t worry about it. Luckily I’m a girl so I can make sure the lads don’t see the pictures. Based on the picture for our budget carpet including underlay and fitting would be from £160 this includes gripper or without underlay would be more around £125.’ 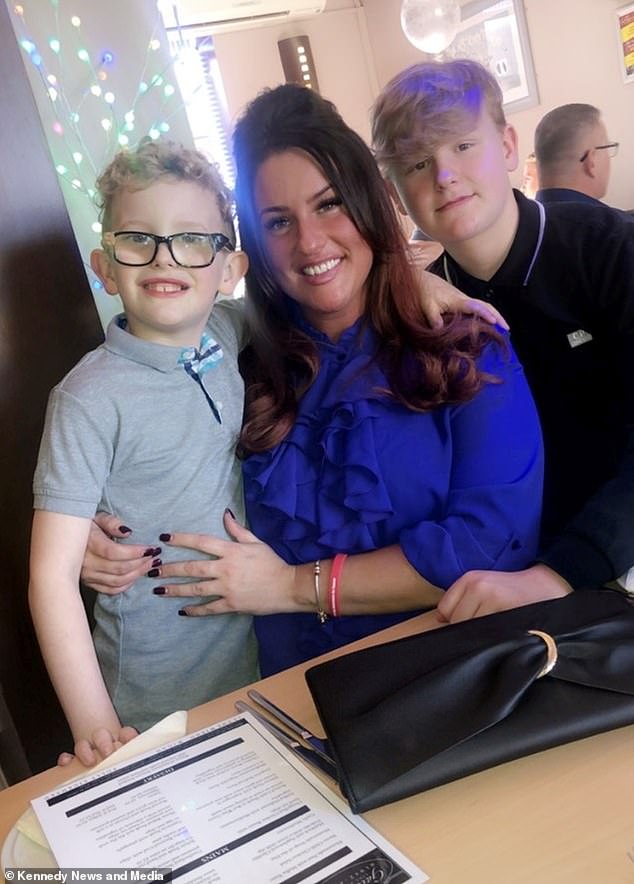 At the moment she realised she made the mistake, Ms Cain (centre, with sons Alfie, right, and Ellis, left) said: ‘I burst out laughing and then ran into my eldest son Ellis’ room and shouted “Ellis help me”, he just found it funny’

Carpets At Home replied: ‘Oh don’t worry about it. Underlay gives you a better feel underfoot on the carpet and will make the carpet last longer.’

Ashley, the social media manager at Carpets at Home, said: ‘It gave me a good laugh it really did.

‘It’s funny some of the stuff you see within the flooring trade. It doesn’t happen all the time but when it does it cracks me up.’

At the moment she realised she made the mistake, Ms Cain said: ‘I burst out laughing and then ran into my eldest son Ellis’ room and shouted “Ellis help me”, he just found it funny.’

She added: ‘I then rang the lad who I’d sent the picture to in the first place and told him “it’s your fault”. He was just laughing and said ‘hopefully you’ll get a discount’.’