A MOUNTAIN rescue volunteer has been left paralysed from his neck down after he suffered horrific injuries while trying to help two covidiots.

Chris Lewis, 60, and other volunteers had been called out when two wild campers got into trouble in the Lake District. 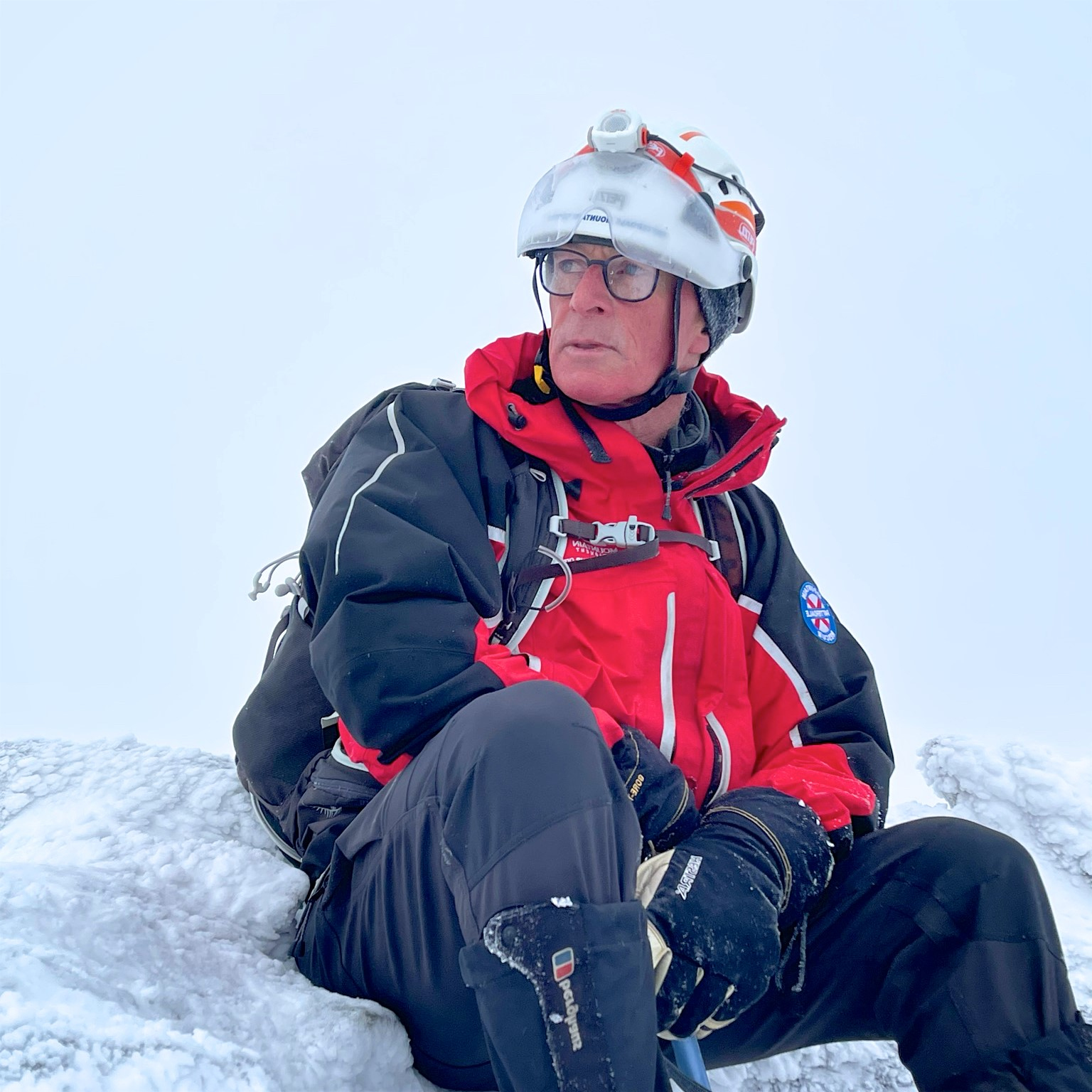 The pair had travelled hundreds of mile in breach of lockdown restrictions and then called 999 in the middle of the night when one suffered chest pains.

But as retired engineer Chris and his colleagues from Patterdale Mountain Rescue headed to help the men he fell 500ft down a ravine near Kirkstone Pass.

He was rushed to hospital with multiple facial fractures and damaged to his spinal cord.

He is still in intensive care nearly a fortnight later and is facing the prospect of the rest of his life a wheelchair. All four limbs are paralysed but medics hope he may get some feeling back in his arms.

The men were fined £200 each – while locals in Cumbria have launched a fund to raise £500,000 to cover his future care costs.

His colleagues told of their delight at the outpouring of support for Chris who they described as a “fantastic guy”.

Richard Warren, chairman of the Lake District Search and Mountain Rescue Association, said: “The support has been overwhelming.” 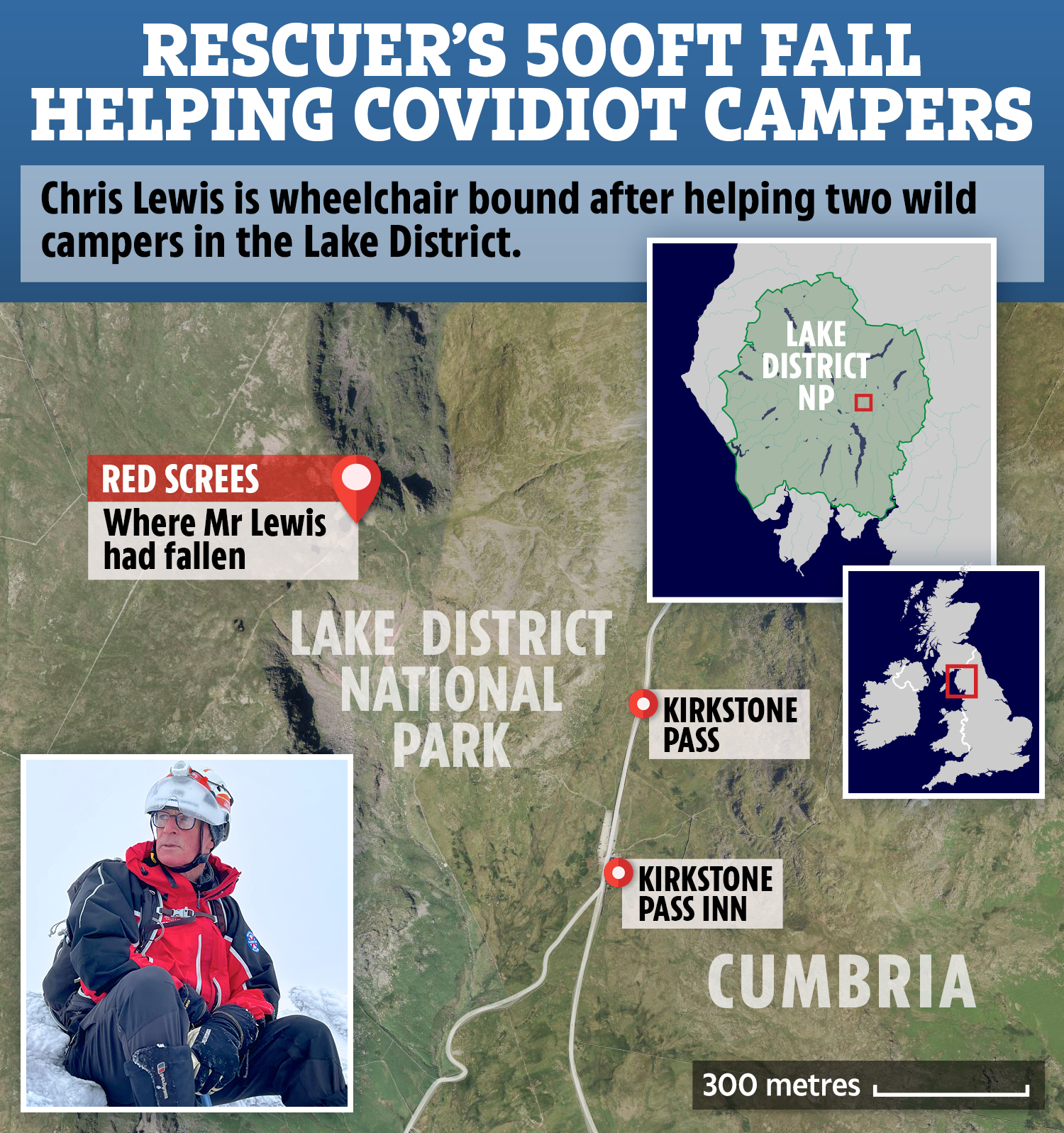 Patterdale Team Leader Mike Rippon said Chris is likely to need 24-hour care for the rest of his life.

He added: "Chris was an extremely fit and healthy man with the rest of his life to look forward to.

"But the injuries he's suffered will change his life completely, he's likely to have full paralysis but may recover a bit of movement in his arms, that's probably the best we can hope for.

'SHOULD NEVER HAVE BEEN NECESSARY'

"This was a proper life changing incident that will leave Chris needing 24-hour care which is just tragic.

"Mentally he's fully there and he's positive and he's passing on his best wishes to the rest of the team, which is humbling and also devastating for us.

"As the team leader I'm trying to pick people up and rally everyone, but psychologically it's had a big effect, I imagine we'll lose members as a result."

If you're thinking of heading for the Lakes this weekend, don't. The messaging is clear, people should be exercising within 2-3 miles of their home.

The team were within sight of the tent pitched by the two men when Chris lost his footing and fell from a ridge.

Their camp was precariously placed at the end of a terrace off a path which meant access was risky for the team.

The Patterdale team was joined that night by the Langdale and Ambleside and Penrith teams, with around 50 volunteers on the ground and an RAF search and rescue plane also combing the fells for the two men.

Mr Rippon said: "If you're thinking of heading for the Lakes this weekend, don't. The messaging is clear, people should be exercising within 2-3 miles of their home.

"We now have a colleague and friend in a quite terrible situation because he voluntarily took part in a rescue that should never have been necessary. People need to understand that they must stay at home." 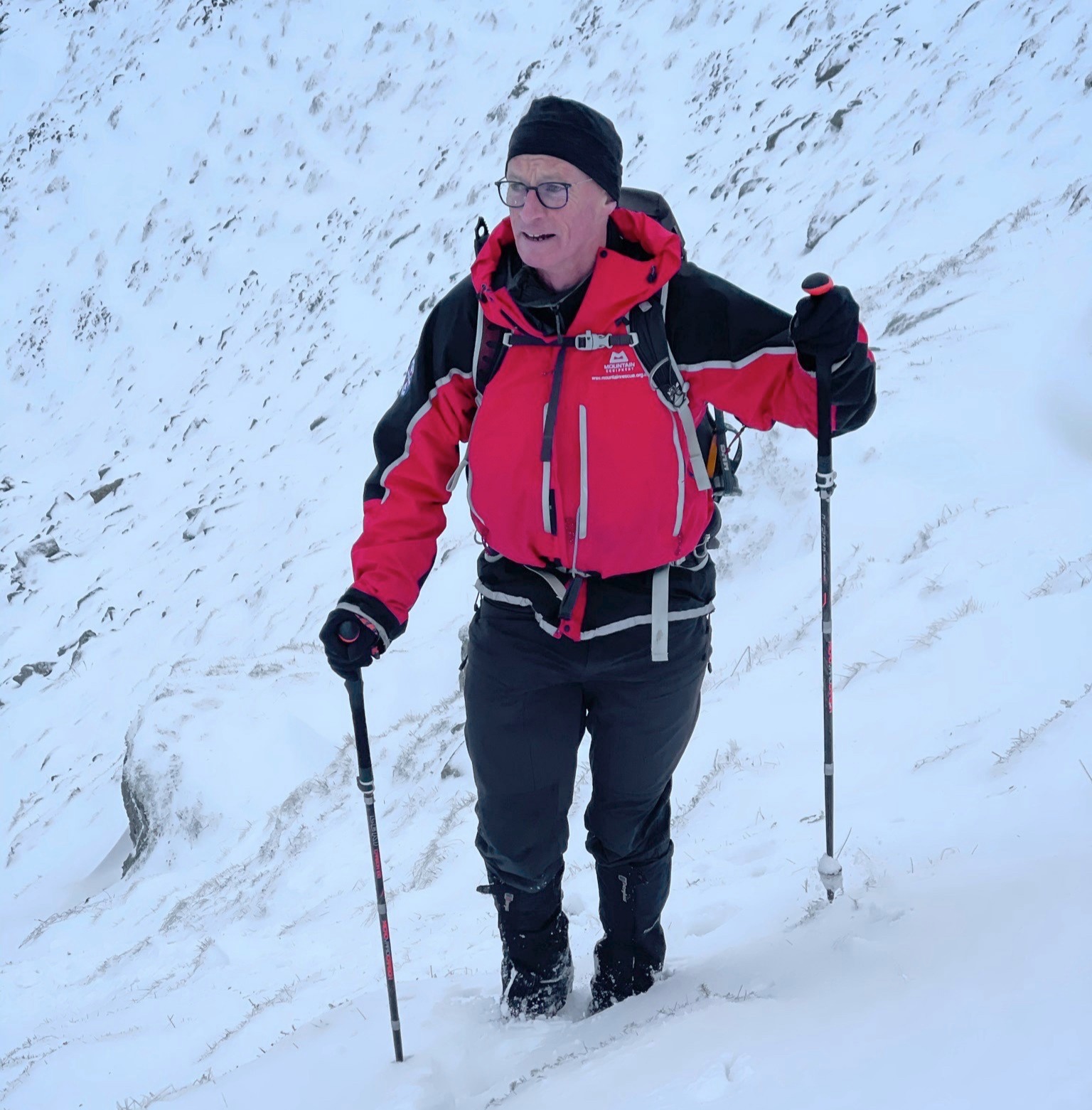 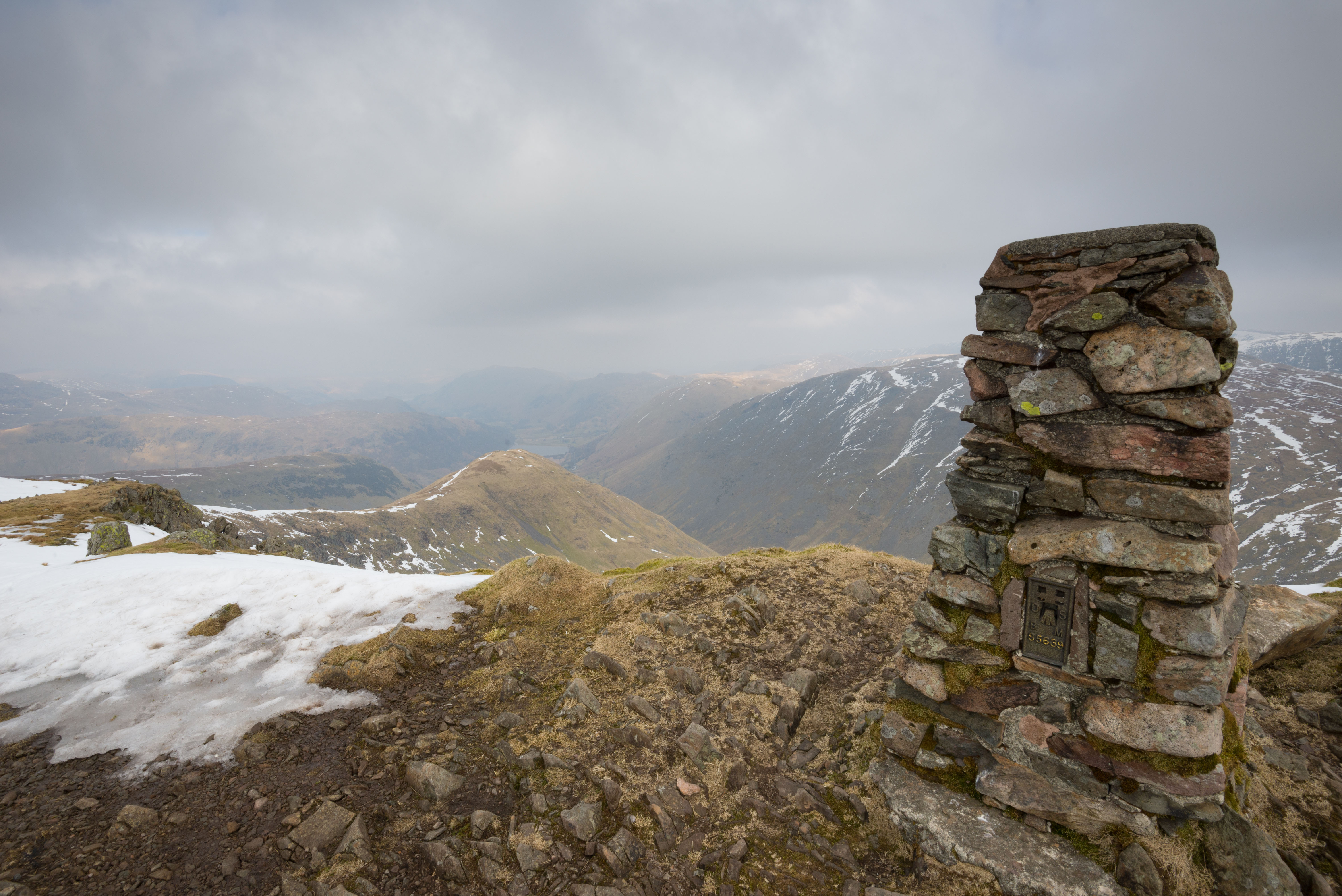 Fellow volunteer Ben Hammond, who was the first to get to Chris after he fell on February 6, said: "He's a very experienced member of the team and is someone to look up to.

"Certainly his injuries are life-changing."

Another colleague Mike Blakey said: "I've done this for 25 years, I can honestly say this was the worst rescue.

"I've seen some things in my time but you never expect to have to rescue one of your own.

"He's having conversations with me already about where we are going to go in the wheelchair."

Local residents slammed the two men who travelled to the Lakes from Liverpool and Leicester.

The 47-year-old from Leicester needed hospital treatment for chest pains but quickly recovered.

Kate Whittenbury, who started one of the funds for Chris, said: “Local people are quite angry about it to be honest.

“It didn't really have to happen, they shouldn't have been here in the first place.

"I just thought something positive needed to be done to offset the negativity."

Despite the anger aimed at the two campers, another volunteer Martin Cotterell said the rescuers were “not there to judge".

He said: "We are there to help. We all love the fells, we are all mountaineers, we go out there because we think we can help people in difficulty. Trying to judge is wrong."

You can contribute to Chris' support fund here. 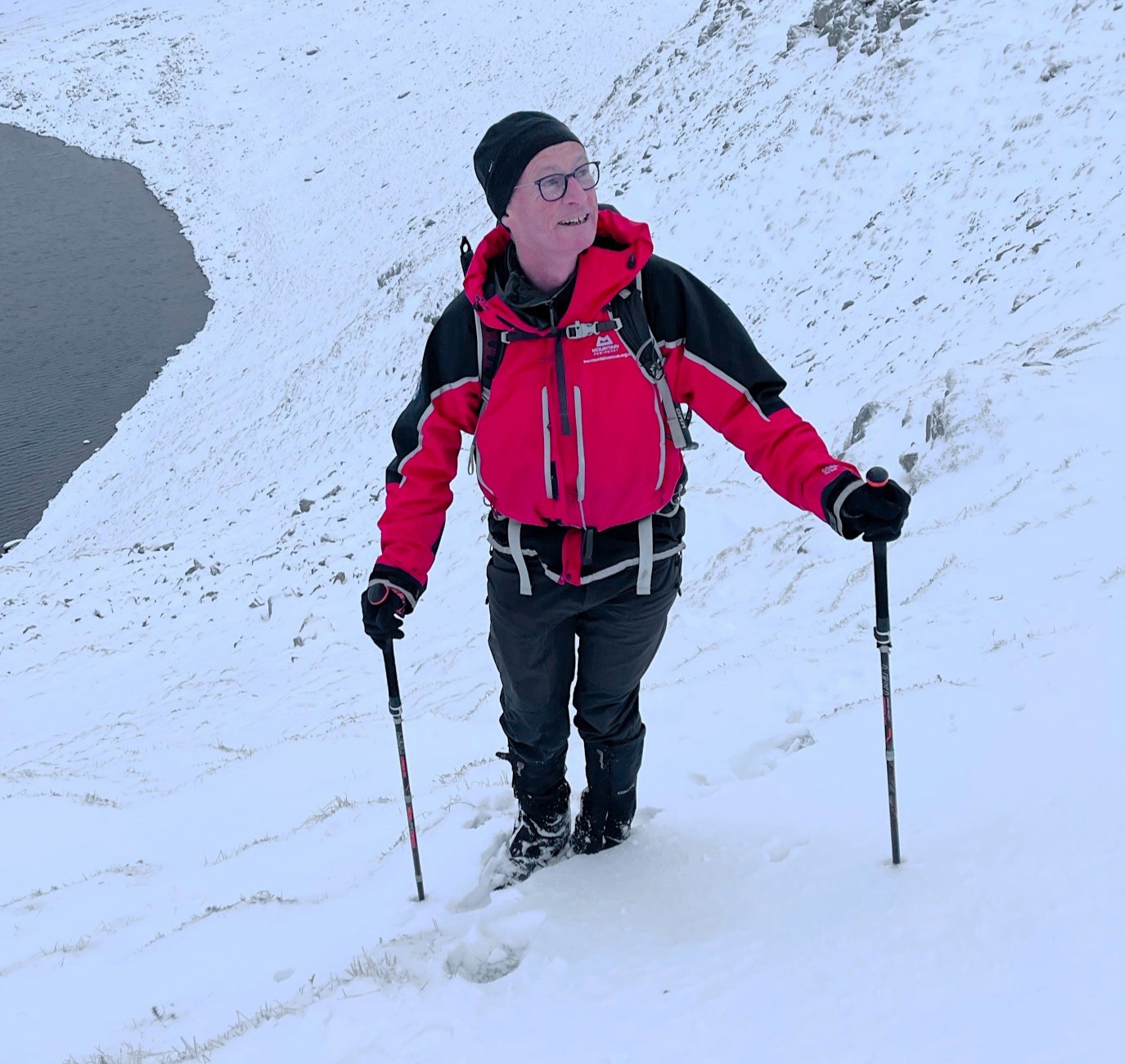