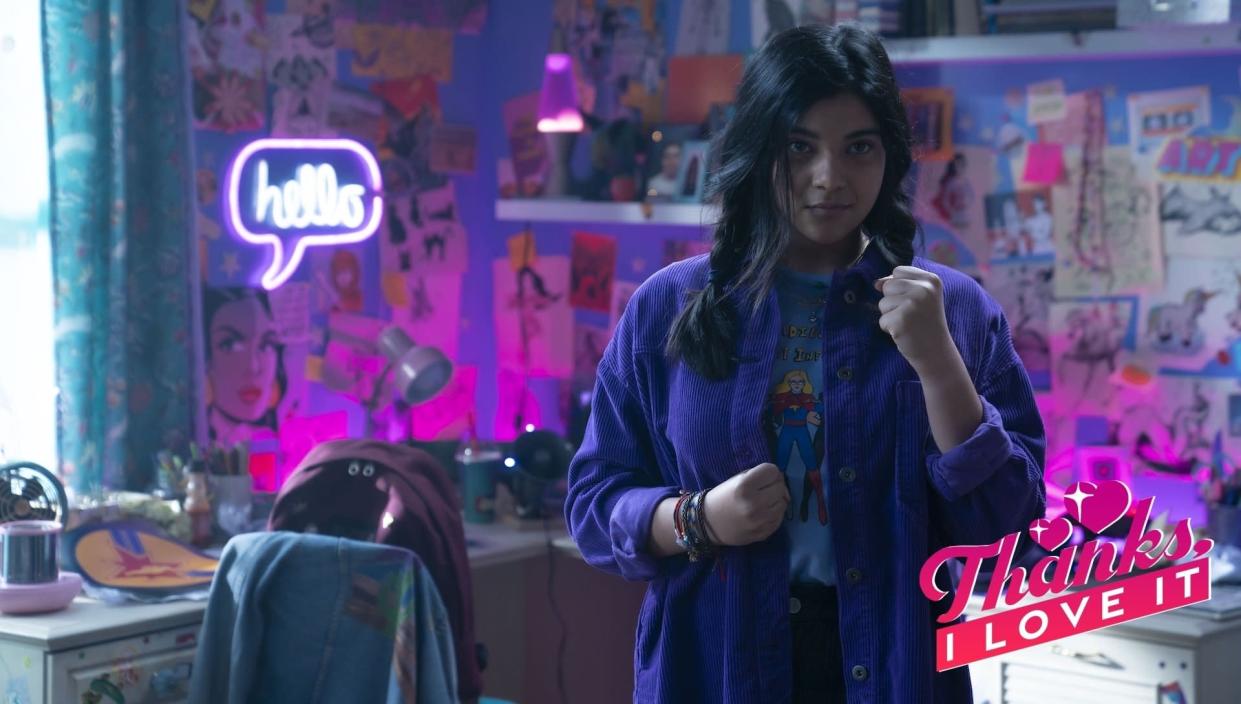 Welcome to , our series highlighting something onscreen we’re obsessed with this week.

It was always going to be a challenge for the MCU to capture the unique, frenetic energy that makes Kamala pop on the page. But the first episode of Ms. Marvel on Disney+ went all-in on adapting her comics’ bouncy and cartoonish aesthetic to the live-action adaptation.

SEE ALSO: Ms. Marvel — Everything you need to know

The episode opens with a gleefully animated retelling of the Avengers’ final battle against Thanos as told by Kamala, complete with doodles of her favorite superheroes and the kind of sound effects a raging fangirl would make when smashing action figures together. It effectively sets Kamala up as one of us, an Avengers superfan, who thinks Earth’s Mightiest Heroes (especially Captain Marvel) are the coolest thing ever. Much of her infectious energy comes from actor Iman Vellani’s exuberant performance as Kamala. But Ms. Marvel props her enthusiasm up with a colorful and occasionally animated style that shows the audience the world through Kamala’s imaginative eyes.

The result is her comic come to life. There’s a fully-realized fantasy sequence where Kamala transforms riding a bus into an action movie montage, her texts to her friends scroll naturally in the form of neon lights and warping street signs, and colorful street art on the walls of Jersey City come to life as Kamala walks past them. The effect is part Lizzie McGuire, part Scott Pilgrim vs. The World, and a heaping part of the most colorful movie starring a Marvel hero: Spider-Man: Into the Spider-Verse.

Those aesthetic callbacks to teen shows and bold comic book adaptations are not an accident. According to Adil el Arbi, who directed two episodes of the first season of Ms. Marvel and also executive produced the show, they were very, very intentional.

“We were very much inspired by Into The Spider-Verse.”

“We were very much inspired by Into The Spider-Verse,” he said in an interview with Mashable. “It’s one of our favorite movies and we were saying, ‘Oh, wouldn’t it be cool to have a live-action version of that?’ And obviously Scott Pilgrim, you know. So that’s how we wanted to have the opening animation, and when she’s texting to have the environment evolving in the murals and all that and the dream sequences.”

SEE ALSO: ‘Ms. Marvel’s Iman Vellani shares the Marvel secret she learned before she was meant to

Arbi also mentioned that the animation and pop art sequences were not originally included in the pitch for Ms. Marvel. “We did a whole presentation with Kevin Feige and other Marvel producers,” he said, “Explaining why it was important with some YouTube videos of the style and explained why it was important to go into Kamala Khan’s head and make that distinct choice.”

In a separate Mashable interview, Sana Amanat, the co-creator of Ms. Marvel’s character and a writer/producer of the show, also revealed that some of the inspiration for Kamala’s YouTube channel and animated videos came from Iman Vellani’s IRL Kamala Khan vibes on set.

“Iman Vellani makes her own videos. She was sending videos to us while we were on set. And we looked at that and were like, ‘How do we inject some of that personality and the fact that she creates stop motion videos.’ It was very much something that we’re like, ‘Yeah, a version of what Iman does should be in our show.'”

Adding a quirky teen comedy with animated flourishes to the MCU’s television roster may not be the most expected move for the franchise. It is, however, the studio’s clearest attempt at giving their new generation of heroes creative introductions that put the character first. And when a character is as beloved as Kamala Khan, it’s definitely the way to go.