Five years ago, when the Neave royal commission released the results of its inquiry into family violence in Victoria, the system – for want of a better word – was in crisis.

Every aspect of the response and support structures that might be made available to people affected by domestic violence was overwhelmed. 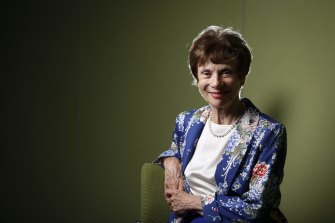 Marcia Neave, oversaw the 13-month Royal Commission into Family Violence which made 227 recommendations five years ago, 167 of which have been implemented.Credit:Eddie Jim

The Andrews government in 2016 gave an immediate commitment to implement all of the commission’s 227 recommendations, and it promised several billion dollars to fund necessary changes.

But while the $3 billion or so allocated to date has brought about some profound and substantive changes, Victoria is not yet where it needs to be in providing adequate and positive institutional and cultural responses to family violence.

As journalist Wendy Tuohy noted on Friday, the pace of change has been frustratingly slow in some areas and statistics suggest family violence is at least as prevalent as it was five years ago, a reflection of how complicated and deep-seated this problem is.

While there has been a seismic shift in police attitudes to family violence – a preparedness to treat it with appropriate gravity and urgency – there are failings elsewhere in the chain that can be fixed.

The state’s Minister for the Prevention of Family Violence, Gabrielle Williams, concedes that, halfway through the government’s 10-year plan, more needs to be done.

That includes providing appropriate emergency and long-term housing options for victims fleeing domestic violence who need assurance and genuine safe houses. As Tuohy noted, some 26,000 women and children are turned away from housing services in Victoria each year due to the lack of availability. Most are believed to have been fleeing family violence.

Victims in some areas have to wait up to eight weeks to gain access to certain family violence support services and children are not always being considered as clients in their own right when they intersect with the system.

It is commendable that 167 (or more than 70 per cent) of the Neave commission’s recommendations have already been implemented, but understanding the impact of those changes may take some time yet.

More may become known with the release in May of the fourth annual report of the Family Violence Reform Implementation Monitor, which is receiving submissions as it analyses the changes at the five-year mark.

The government set ambitious, and possibly unachievable, high targets for its 10-year change program, including that no woman or child would be killed as a result of family violence.

With that in mind, cultural transformation to prevent family violence – an essential step in all this – remains one of the most intractable and profound issues.

The Age noted back in 2016 that the path for improving family violence responses and associated institutions would not be easy. Broad changes in attitudes towards women is essential, but so too is addressing the contributing factors such as poverty, mental health issues and even alcohol.

Most, but not all, perpetrators of family violence are men, and there is considerable research showing that such men tend to have poor attitudes towards women. Shifting those views is difficult, as has been shown in recent weeks with revelations and allegations of rape, abuse, intimidation and discrimination emanating from the halls of Parliament House in Canberra.

More could be achieved by male leaders demonstrating empathy, by men making it clear that they will not tolerate their mates or anyone else hurting or disrespecting women.

The Age’s editor, Gay Alcorn, writes an exclusive newsletter for subscribers on the week’s most important stories and issues. Sign up here to receive it every Friday.