Music was today banned in restaurants and bars on Mykonos by the Greek authorities who have also enforced a five-hour overnight curfew on the island.

Mykonos is one of Greece’s most popular destinations, attracting more than a million visitors each summer including Hollywood stars, models and world-famous athletes.

But the Civil Protection Ministry has imposed the measures after a ‘worrying’ local outbreak of Covid-19 infections in recent weeks on the party island of the super-rich.

Music is now banned at all times – including in shops, cafes and beach bars – and people can only be out between 1am and 6am if going to and from work or hospital.

England footballers Mason Mount, Luke Shaw, Kyle Walker and Declan Rice are all on holiday in Mykonos and were filmed this week singing along passionately to Neil Diamond’s hit ‘Sweet Caroline’ which has become an anthem for the team. 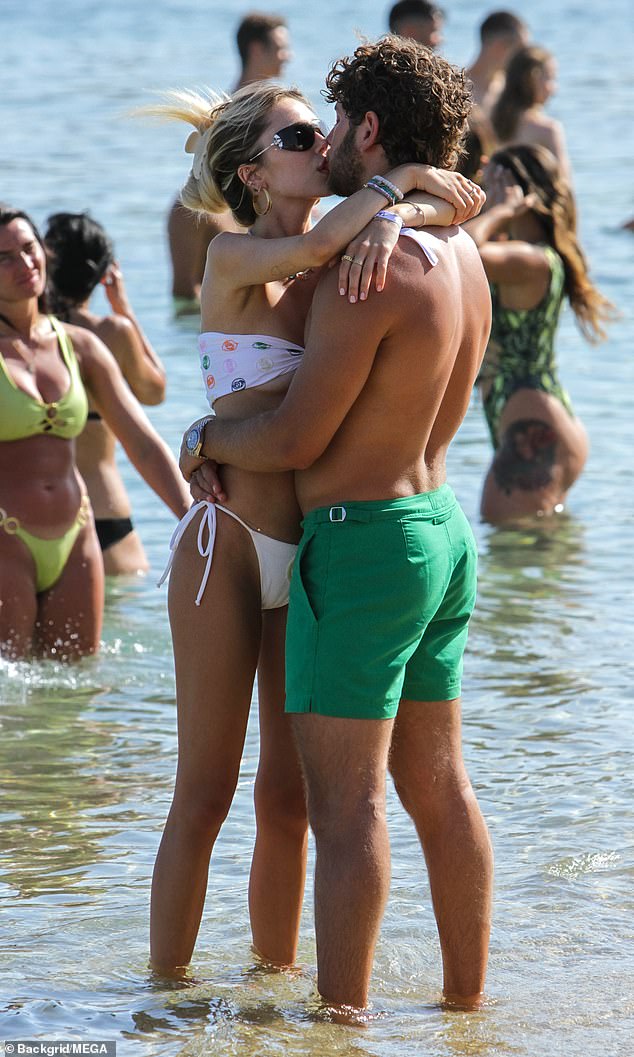 Model  Delilah Hamlin is on holiday in Mykonos with her partner Eyal Booker, pictured on Friday 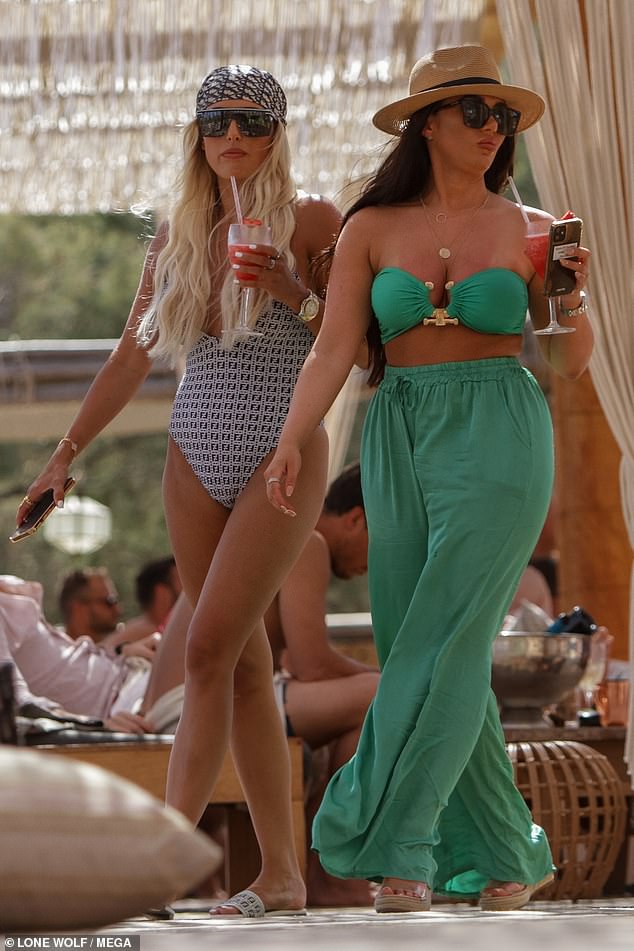 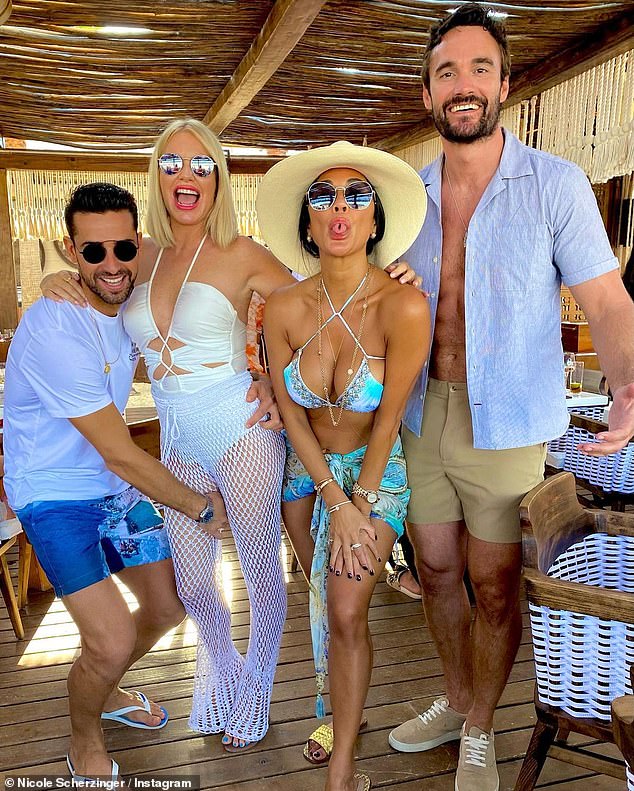 Greece depends on tourism for a fifth of its economy and needs a strong season this year following a disastrous 2020 when visitor numbers and revenues collapsed.

Infection rates have been rising in Greece in recent weeks, forcing the government to mandate the vaccination of healthcare workers and nursing home staff.

It has also introduced new restrictions across the country, including allowing only vaccinated customers indoors at restaurants and clubs.

Mykonos’s Mayor Konstantinos Koukas said imposing measures at the heart of the tourism season was ‘unfair’ and ‘misguided.’

‘Mykonos cannot be the only island where music won’t be heard… the only thing this will achieve is that visitors will go to another island,’ he wrote on Facebook. 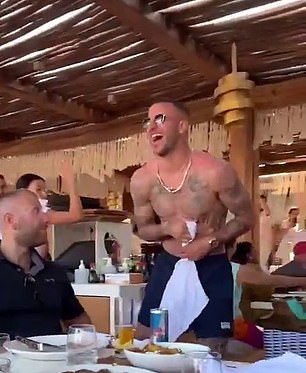 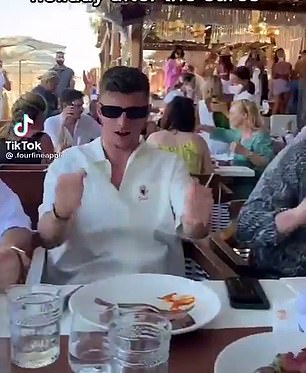 The government banned music in restaurants and bars across the country in May to avoid people having to get close to one another to be heard, increasing the chances of transmitting the virus. It lifted that measure when infections dropped.

‘We call on the residents, visitors and professionals on our beautiful island to strictly follow the measures… so that we can quickly control and contain the spreading of the virus and Mykonos can return to normality,’ the ministry said.

The restrictions on Mykonos will be in place until July 26.

Deputy civil protection minister Nikos Hardalias said: ‘We call on the residents, visitors and business owners of our beautiful island to follow the measures faithfully… so that the spread of the virus can be swiftly checked and Mykonos can return to normal.’

Mykonos draws a steady stream of celebrities to its picturesque beaches and vibrant nightlife. 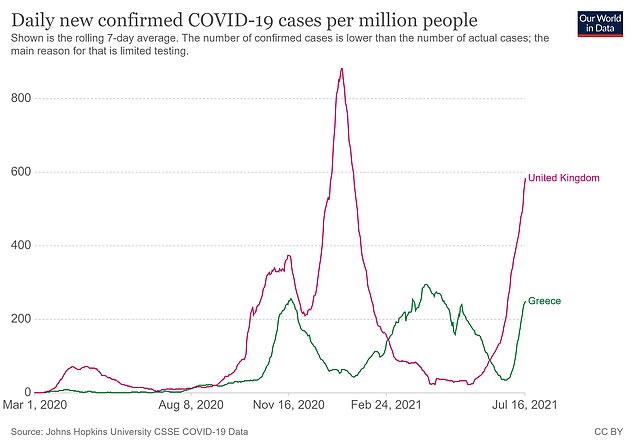 Infection rates have been rising in Greece (green line) in recent weeks, with the above graph showing how they compare to those in the UK (pink line) per million people 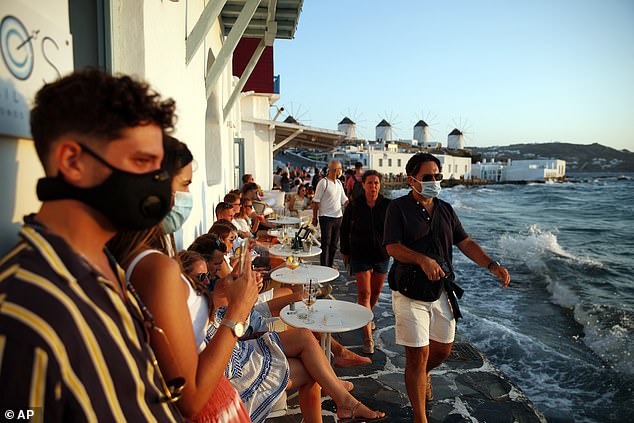 But Greek authorities have been lately alarmed by the number of clandestine parties held in the island’s numerous villas.

Mr Hardalias on July 15 had warned that active cases on Mykonos had quadrupled to over 300 in just a week.

Greece is experiencing a steady climb in Covid-19 infections in recent days, largely blamed on the more contagious Delta variant which originated in India.

Nearly 2,700 new cases were announced nationwide on Friday, compared to fewer than 400 three weeks prior.

The European Centre for Disease Prevention and Control said yesterday that weekly new Covid-19 cases have increased by 64 per cent in the EU and EEA compared to the week before. The rise was biggest within the 15-to-24-year-old age group.