Has Rishi been given a get-out on state pension ‘triple lock’? New figures put OAPs on track for an 8 PER CENT hike due to effects of Covid and furlough if Tory manifesto pledge is kept – but ONS says ‘underlying’ wage growth is HALF that

Experts said Rishi Sunak could have been handed a ‘get out’ clause on the state pension ‘triple lock’ today – despite figures showing OAPs in line for a rise of up to 8 per cent this year.

Total wage growth excluding bonuses spiked to 6.6 per cent in the three months to May, according to the latest official data.

Economists say the effects of furlough and the pandemic are warping the figures, and the level could reach 8 per cent by the quarter to July – which is used for setting the state pension increase under the government’s mechanism. That would drive up costs for the Treasury by more than £3billion a year.

However, the Office for National Statistics appeared to give the Chancellor a new option this morning by estimating that ‘underlying’ wage growth is around half that figure.

It said the true rate of earnings increases was probably between 3.2 per cent and 4.4 per cent. 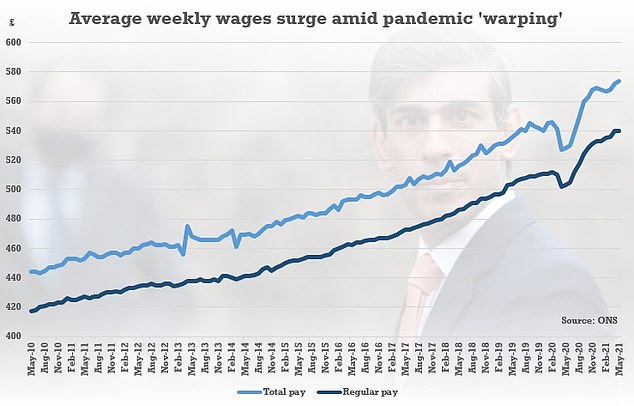 Total wage growth excluding bonuses spiked to 6.6 per cent in the three months to May, according to the latest official data

Treasury sources insisted they will wait until the autumn to make a decision on the pension increase, but said it was clear this year would be an ‘anomaly’.

The Tory manifesto committed to keeping the ‘triple lock’, which guarantees that the state pension rises by the highest out of inflation, earnings or 2.5 per cent.

However, there has been growing alarm at the potential scale of the rise this year amid the pandemic.

The blog by ONS statistician Jonathan Athow today identified two reasons why the wage figures were not reflecting reality.

‘In spring-summer 2020, many workers were on furlough or had their hours reduced,’ he wrote.

‘This meant that people saw their earnings fall, pushing down weekly wages. This year, with fewer people on furlough and hours returning closer to normal, weekly wages are higher.’

He also highlighted ‘compositional’ factors. ‘During the pandemic, we saw lower-paid people at greater risk of losing their jobs,’ the blog said. ‘Fewer lower-paid people in the workforce increased average earnings for those who remained in work.’

Attempting to adjust for furlough and the compositional flaws suggested an underlying rate of between 3.2 per cent and 4.4 per cent, according to the ONS.

Former pensions minister Steve Webb, who is now a partner at consultants Lane Clark & Peacock, said the triple lock guarantee used to uprate pensions was not designed for average earnings being as volatile as they are currently.

However, Sir Steve said the final figure for the quarter to July – due to be published in September – could be higher than 6.6 per cent. 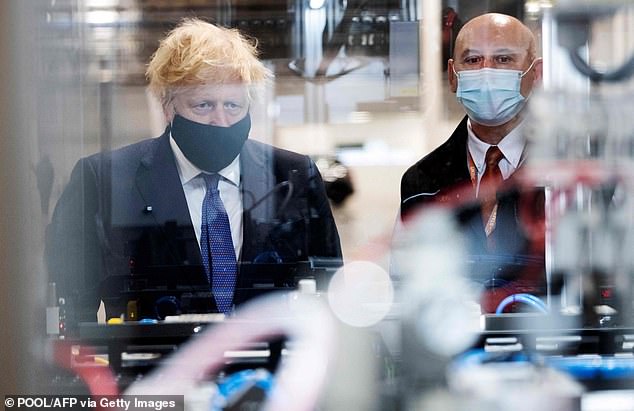 The inflation figure used in the calculation is the September Consumer Prices Index, set to be published in October.

‘The Chancellor may well be tempted to use an ”adjusted” average earnings figure for the April 2022 uprating as this might ”get him off the hook” this time round,’ Sir Steve said.

‘But if he does so he should also re-commit to a strategy of building up the value of the state pension thereafter.

‘This is particularly important to growing numbers of women who have worked in the private sector, who may have very modest workplace pensions and are heavily dependent on the state pension.’

Tom Selby, senior analyst at AJ Bell, said it was ‘entirely plausible’ that average earnings could spike by 8 per in the three months to July, as society emerges from lockdown and more parts of the economy open up.

Mr Selby said: ‘Chancellor Rishi Sunak faces being caught between the devil and the deep blue sea on the state pension triple lock.

‘While the policy could add billions of pounds to public spending at a time of severe fiscal pressure for the country, unpicking it would break a manifesto commitment.’