Throughout 2020, Donald Trump captivated and scandalised the world as he fought for a second term in the White House while struggling to respond to the coronavirus pandemic and the eruption of nation-wide protests against police brutality. And although he may have lost the November election to Joe Biden, it’s clear he is going to remain a force in US politics for many years to come. 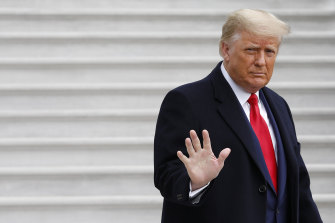 US President Donald Trump is not going quietly. Credit:Bloomberg

What did he do?

Donald Trump’s fourth year in office started off swimmingly. On February 6, the Senate acquitted Trump in his impeachment trial with just one Republican – former presidential candidate Mitt Romney – voting to remove him from office. The US economy was soaring. Trump had signed a “phase one” trade deal with China. And the Democrats looked like they were about to nominate self-declared socialist Bernie Sanders as their presidential nominee.

Then the coronavirus pandemic arrived. Trump instantly saw the virus – and the economic damage it would cause – as a major threat to his re-election prospects. He took decisive early action by restricting travel from China and then Europe. But he insisted on downplaying the seriousness of the virus – a form of magical thinking that would continue throughout the year.

In late February, Trump predicted the country’s coronavirus cases would be “down to close to zero” in a couple of days. Instead, cases skyrocketed and the daily death count soon shot over 2000 a day. Trump declared himself a “wartime president” and held daily coronavirus briefings at the White House in an effort to project a sense of authority. But his response to the pandemic became increasingly erratic, culminating in the embarrassing briefing where he mused about treating the virus with disinfectant. 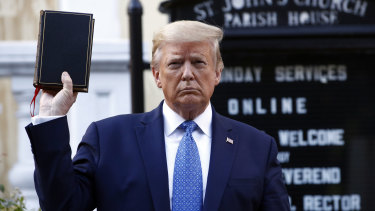 Donald Trump holding up a bible outside a church damaged during Black Lives Matter protests in Washington DC in June.Credit:AP

When protesters gathered outside the White House in June, Trump ordered them to be forcibly cleared out so that he could pose for photos with a bible in front of a nearby church that had been damaged the previous night.

Why did he matter?

The November 3 election marked a decisive moment for America: either Trump would be returned for another four years or he would become a one-term president. Throughout the year, the polls showed Trump consistently trailing his Democratic opponent Joe Biden. After Trump’s belligerent performance in the first presidential debate and his hospitalisation with COVID-19, a landslide defeat seemed to be looming. But Trump returned to the campaign trail with vigour – holding up to five rallies a day – and he put in a more composed performance in the second debate. Crucially, most Americans continued to give Trump high marks for his handling of the economy.

When the results started coming in on election night, it started to feel like 2016 all over again for Democrats. Trump had again outperformed his polls. It was clear early on that Trump had held onto states such as Florida, Ohio and Texas, meaning Biden would not score the thumping, blow-out win progressives had hoped for.

Meanwhile, because of the surge in mail-in voting, it was unclear who would win pivotal battlegrounds such as Wisconsin, Michigan and Pennsylvania. As he had foreshadowed during the campaign, Trump leapt into the void in the early hours of the morning to declare himself the winner of the election and claim, without any evidence, that the election had been corrupted by widespread fraud.

By the next morning, however, it was clear that Biden was the most likely winner: in the end Biden picked up 306 electoral votes, the same number Trump won in 2016. Trump’s attempts to reverse the outcome through the courts in the following weeks proved wildly unsuccessful, but his constant allegations of fraud have convinced the bulk of Republican voters that Biden’s victory was illegitimate. A poll earlier this month by Marist College showed that just one quarter of Republican voters believe the election results were accurate.

Although he continues to claim he was the rightful winner of the election, Trump will leave the White House on January 20 when Biden is inaugurated as America’s 46th president. Before then he is expected to issue a slew of presidential pardons – including to several close associates and perhaps even members of his own family.

After they depart Washington, Trump and wife Melania plan to move to Florida and live at his Mar-a-Lago club. No other figure on the conservative side of politics can match Trump’s prominence or popularity, meaning Trump will remain a kingmaker in the Republican Party. As well as holding rallies, the former reality TV star may host his own television show or perhaps even launch his own media platform. Even though he will be out of office, Trump will be determined to remain in the spotlight. The best way to do that: teasing, or even announcing, that he will run for president again in 2024.