NRA in crisis: The gun lobby’s Game of Thrones

New York: The National Rifle Association’s 148th annual meeting last weekend should have been a triumphant moment for the lobby group. Eighty-thousand Second Amendment enthusiasts gathered in Indianapolis to celebrate their constitutional right to gun ownership – among them the most powerful person in the Western world.

US President Donald Trump addressed the convention, telling the crowd that he had travelled to be with them even though it was his wife Melania’s birthday. 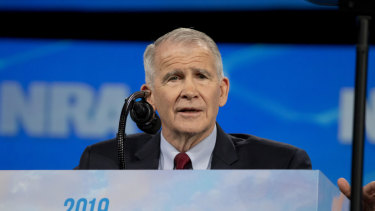 President of the National Rifle Association Oliver North says he will not serve a second term in the job.Credit:Bloomberg

Trump’s praise was poorly timed. Just a day later, on Saturday, an NRA board member walked onto the stage and announced that North was leaving the organisation.

In his resignation letter North, who lost an internal stoush with Executive Vice-President Wayne LaPierre, said the NRA faces "a clear crisis” that it must deal with "immediately and responsibly".

A bitter struggle for control of the NRA that had been playing out behind closed doors suddenly burst into full public view. 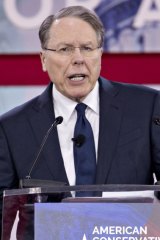 Wayne LaPierre, vice-president of the NRA.Credit:Bloomberg

"This is the NRA’s version of Game of Thrones," says Robert Spitzer, the author of The Politics of Gun Control.

The legal struggle, he adds, is just a symptom of a deeper crisis.

The NRA has long been viewed as a fearsome, all-powerful organisation – and for good reason. It has exercised a virtual veto over national gun policy over recent decades, using its clout to block even minor gun safety measures. At a state level it has often been even more powerful – in some Republican-controlled states, politicians have essentially outsourced gun policy to the NRA.

But the gun rights Goliath is now in a precarious position – at war with itself, bleeding cash and with its unpopularity at historic levels.

"They have money problems, they have legal problems and politically they are on the ropes,” Spitzer says.

Marion Hammer, a former NRA president and longtime lobbyist from Florida, was in despair at the convention. "The life’s blood of this organisation is on the line," she said. "We are under fire from without. We do not need to be under attack from within."

At the heart of the power struggle that erupted in Indianapolis is a previously obscure public relations firm based in Oklahoma City.

Since the 1980s, Ackerman McQueen has been integral to every public development of the NRA – including former association president Charlton Heston's famous "From my cold dead hands" mantra.

The firm runs the NRA's TV network and handles its public relations, marketing, branding, corporate communications, event planning, web design and social media content. It's a lucrative partnership. In the 2017 financial year the NRA paid Ackerman McQueen and its affiliates $US40 million. 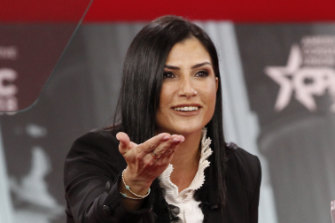 It is Ackerman McQueen that employs many of the NRA's most recognisable faces, including telegenic spokeswoman Dana Loesch and Oliver North. (The NRA presidency is an unpaid, largely ceremonial position.)

But relations have soured recently as the NRA's leadership grew concerned about whether it was getting ripped off by its longtime promoter. In April the NRA sued Ackerman McQueen, accusing the firm of withholding billing information and breach of contract.

North appears to have taken Ackerman McQueen's side in the dispute.

The day before Trump’s appearance at the convention, LaPierre wrote to the NRA’s board members telling them North had threatened to release a "devastating account of our financial status, sexual harassment allegations against a staff member, accusations of wardrobe expenses and excessive staff travel expenses" unless LaPierre resigned. 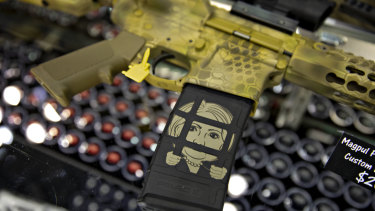 A firearm magazine featuring the image of former US secretary of state Hillary Clinton at this year’s National Rifle Association annual meeting in Indianapolis.Credit:Bloomberg

The majority of the board sided with LaPierre, who has held his role since 1991. But he has not emerged unscathed. Documents released by Ackerman McQueen this week showed he charged the firm more than $US240,000 for expenses related to trips he took to Italy, Hungary, the Bahamas and other places without providing adequate documentation.

In and of itself, the NRA's dispute with its long-time PR firm would be costly and embarrassing. But it poses a far more serious threat to the organisation because of aggressive action being taken by New York's state government.

It was revealed last week that New York Attorney-General Letitia James had launched an investigation into the NRA's charitable status. Among the issues being probed is its relationship with vendors such as Ackerman McQueen. 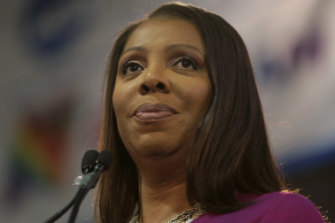 The NRA was chartered in New York and if stripped of its non-profit status it will lose access to significant tax benefits. No one should doubt James' determination: last year she described the NRA as a "terrorist organisation".

New York Governor Andrew Cuomo has already done major damage to the NRA by outlawing an insurance policy it offers to gun owners. In a lawsuit, the NRA said Cuomo's action had cost the organisation "tens of millions of dollars" in legal fees, lost royalties and damage to its reputation.

The group's finances are indeed in a disastrous state. It posted a $US17 million deficit in 2017, the second consecutive year it operated at a loss. Membership dues plummeted from $US163 million in 2016 to $US128 million a year later.

"Their current business model cannot be sustained the way it is going," according to Brian Mittendorf, an accounting professor from Ohio State University.

The NRA's decline has coincided, almost exactly, with a surge of energy among its opponents. There had long been broad support in the US for a tightening of gun laws. But the gun control movement lacked the money and grassroots energy to match the NRA – until now.

Last November's midterm elections made history as the first time gun control advocates outspent the gun rights lobby. The turnaround was due partly to big spending by billionaire Michael Bloomberg.

Gun rights remain extremely popular within the Republican Party, where the NRA is still a powerful force. As long as Republicans retain control of the White House or the Senate, it is hard to imagine gun restrictions being passed in Washington.

There also used to be a significant number of Democratic politicians who were close to the NRA but that's no longer the case. Taking action on guns has become a litmus test issue for Democrats and all the party's 2020 presidential candidates are committed to taking on the NRA. 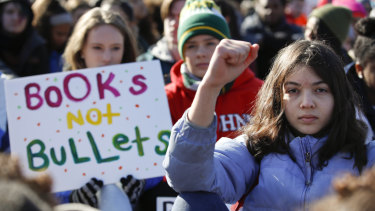 US students rally outside the White House in March 2018 to protest gun violence.Credit:AP

"The NRA has fought back from adversity before, so it would be a terrible mistake to count them out," Spitzer says. "But in the short term being tied up with so many problems is going to marginalise them politically.

"In the game they're in you have to pay to play, and they are not going to be able to play a big role in the 2020 election."